Showing posts from June, 2016
Show all

WILD & WONDERFUL WEDNESDAY: Freddy the Frogcaster and the Terrible Tornado by Janice Dean

FREDDY THE FROGCASTER AND THE TERRIBLE TORNADO by Janice Dean "The Weather Machine", illustrated by Russ Cox Regnery Kids, 2016 ISBN: 978-1-62157-469-9 Ages 6-10 Picture Book Source: publisher for review All opinions expressed are solely my own. ABOUT THE BOOK Get ready for a whirlwind of adventure with Freddy the Frogcaster when a famous storm chaser visits Lilypad! In her fourth book, well-known meteorologist Janice Dean tackles some scary weather. Freddy the Frogcaster is faced with one of the most ferocious and devastating kinds of weather: the tornado. Young readers will learn all about how big storms occur and produce some of nature's most destructive weather. Chock-full of storm science lessons in the back, children and adults alike will learn valuable life-saving information. As Freddy reminds us, please be prepared and know what to do and where to go when the next bad storm comes your way! REVIEW Freddy helps his town get ready more n
Post a Comment
Read more

WHAT ELEPHANTS KNOW by Eric Dinerstein Disney Hyperion, 2016 ISBN: 978-148472854-3 Source: purchased Middle grade contemporary (diverse) Ages 9-14 All opinions expressed are solely my own. ABOUT THE BOOK Abandoned in the jungle of the Nepalese Borderlands, two-year-old Nandu is found living under the protective watch of a pack of wild dogs. From his mysterious beginnings, fate delivers him to the King's elephant stable, where he is raised by unlikely parents-the wise head of the stable, Subba-sahib, and Devi Kali, a fierce and affectionate female elephant. When the king's government threatens to close the stable, Nandu, now twelve, searches for a way to save his family and community. A plan to reinvent the elephant stable could be the answer. But to succeed, they'll need a great tusker. Their future is in Nandu's hands as he sets out to find a bull elephant and bring him back to the Borderlands. In simple poetic prose, author Eric Dinerstein bring
Post a Comment
Read more

BASIL OF BAKER STREET The Great Mouse Detective, #1 Eve Titus, illustrated by Paul Galdone Aladdin, 2016 (reprint edition) ISBN: 978-1-4814-6402-4 Middle grade mystery Source: purchased All opinions expressed are solely my own. ABOUT THE BOOK Named one of “13 Detective Book Series You Obsessed over as a Kid” by Buzzfeed.com and the inspiration for a hit Disney film, the masterful Great Mouse Detective series is now available to a whole new generation of readers! Basil—the famous sleuth of mousedom—lives in the cellar of Sherlock Holmes’s house. A devoted admirer of the great detective, he has learned his craft by listening at the feet of Holmes himself. But will it be enough to help Basil solve his most baffling mystery yet? The Mystery of the Missing Twins is one of the strangest cases in Basil’s career. With only a few crumbs of clues with which to find answers, how is he ever going to figure out where Angela and Agatha are being kept—and, of course, who mouse-n
Post a Comment
Read more

BEARD IN A BOX by Bill Cotter Alfred A. Knopf, 2016 ISBN: 978-0-553-50835-2 Ages 4-8 Source: purchased All opinions expressed are solely my own. ABOUT THE BOOK A funny father-son romp for fans of Don’t Push the Button! and Mustache Baby. A young boy longs for a beard like Dad’s, and when he discovers a hair-growth product called Beard in a Box, he must have it! He rips open the package, plants the beard seeds, and waits . . . And waits . . . And waits. Hilarious art and a feel-good ending make this the perfect Father’s Day gift for bearded and clean-shaven readers alike! REVIEW In this delightfully funny look at what makes dad so awesome, a young boy figures it's his father's beard that makes him so cool.  So he searches for a way to become awesome like his dad.  When he sees a commercial on TV for a beard in a box, he is ecstatic and orders one right away (after several misadventures, one involving shaving the cat).  But things don't work quite
Post a Comment
Read more

FOR THE RIGHT TO LEARN Malala Yousafzai's Story by Rebecca Langston-George, illustrated by Janna Bock Capstone Young Readers, 2016 ISBN: 978-1-62370-426-1 Picture Book Nonfiction Ages 8-12 Source: purchased All opinions expressed are solely my own. ABOUT THE BOOK She grew up in a world where women were supposed to be quiet. But Malala Yousafzai refused to be silent. She defied the Taliban's rules, spoke out for education for every girl, and was almost killed for her beliefs. This powerful true story of how one brave girl named Malala changed the world proves that one person really can make a difference. REVIEW Malala Yousafzai is this kind of role model that the world needs more of, the kind that leaves a most definite mark on the world.  In a culture that tried to keep her down and silent, Malala chose not to be silent.  But her courage nearly cost her her life when the Taliban attempted to kill her.  After recovering, Malala continued her fight for gi
4 comments
Read more

THE SCRIVENER'S BONES Alcatraz vs. the Evil Librarians #2 by Brandon Sanderson, illustrations by Hayley Lazo Starscape, 2016 ISBN: 978-0-7653-7896-5 Source: publisher for review Ages 9-12 Middle grade speculative (fantasy) All opinions expressed are solely my own. ABOUT THE BOOK In this second Alcatraz adventure, Alcatraz finds himself on a mission to meet Grandpa Smedry when he gets swept up by a flying glass dragon filled with his unusual and mouthy Smedry cohorts. Their mission? A dangerous, library-filled one, of course! They are on their way to the ancient and mysterious Library of Alexandria (which some silly people think was long ago destroyed!) where they must find Grandpa Smedry, look for clues leading to Alcatraz's potentially undead dead father, and battle the creepy, dangerous soul-sucking curators who await them. REVIEW In this second volume of the five book series, Alcatraz and his cohorts are once again in trouble.  Hardly surprising,
1 comment
Read more

BEYOND THE RISING TIDE by Sarah Beard Sweetwater Books, 2016 ISBN13: 9781462118748 YA Romance Source: eARC from the publisher All opinions expressed are solely my own. ABOUT THE BOOK Kai was seventeen when he died saving Avery’s life, though he didn’t really have much to live for. After spending half his life being shipped around to different families, the only place he felt at home was on a street corner with his guitar. Now, it’s been six months since his death. Six months adapting to a new kind of existence where instead of making music, he uses his new healing powers to save lives. But in his off hours, he watches helplessly as Avery’s life is unraveled by his death. Avery doesn’t know that it was Kai who saved her life in the ocean, because her rescuer’s body was never found. Wracked with guilt, the ocean she once loved is now her tormentor. As her surfboards collect dust in the garage, the weight of her grief destroys her relationships and stretches her to a br
1 comment
Read more

THE GREAT WHITE SHARK SCIENTIST by Sy Montgomery, photographs by Keith Ellenbogen Houghton Mifflin Harcourt, 2016 ISBN: 978-0-544-35298-8 MG/YA Nonfiction Source: purchased All opinions expressed are solely my own. ABOUT THE BOOK Dr. Greg Skomal, biologist and head of the Massachusetts Shark Research Program, is investigating a controversial possibility: Might Cape Cod’s waters serve as a breeding ground for the great white shark, the largest and most feared predatory fish on Earth?  Sy Montgomery and Keith Ellenbogen report on this thrilling turning point in marine research and travel to Guadeloupe, Mexico, to get up close and personal with the sharks. This daring expedition into the realm of great whites shows readers that in order to save the planet and its creatures, we must embrace our humanity and face our greatest fears. REVIEW One of the things that I always enjoy about the Scientists in the Field series is a glimpse into the work that these scientists do t
Post a Comment
Read more

PICTURE BOOK REVIEWS: The power of stories and storytelling

SURF'S UP by Kwame Alexander, illustrated by Daniel Miyares North South, 2016 ISBN: 978-0-7358-4220-5 Ages 4-8 Source: purchased All opinions expressed are solely my own. ABOUT THE BOOK Surf's up! Not yet, Dude! Books are boring! Not this one! Bro and Dude have very different ideas about how to spend the day at the beach. But as Bro continues to gasp and cheer as he reads his book (Moby Dick), Dude can't help but get curious. Before you can shout 'Surf's up!' both frogs are sharing the same adventure, that is, until they get to the beach. Newbery Medal Winner, Kwame Alexander, and Daniel Miyares have joined forces to give little listeners a wild ride. REVIEW Alexander has created a fun homage to the power of the written word.  As a young frog seeks his brother's company at the beach, he gets pulled into the book his brother is reading.  His imagination gets the better of him and they crash, but the youngster's enthusiasm can be felt t
Post a Comment
Read more

ANYTHING BUT ORDINARY ADDIE The True Story of Adelaide Herrmann Queen of Magic written by Mara Rockliff, illustrated by Iacopo Bruno Candlewick Press, 2016 ISBN: 978-0-7636-6841-9 Picture Book Ages 4 and up Source: purchased All opinions expressed are solely my own. ABOUT THE BOOK Be astonished and dazzled by the true story of Adelaide Herrmann, the Queen of Magic! Some girls are perfectly happy never doing anything out of the ordinary. But Addie was anything but ordinary. She longed for thrills and excitement! At a time when a young lady appearing onstage was considered most unusual, Addie defied convention and became a dancer. And when she married the world-famous magician Herrmann the Great, she knew she had to be part of his show. Addie wanted to shock and dazzle! She would do anything to draw the crowds, even agree to be shot out of a cannon. But when Herrmann the Great died, Addie couldn’t disappoint her loyal fans — the show had to go on. What could she do?
1 comment
Read more

PUT ME IN THE STORY GRAND SWEEPSTAKES! and Reviews 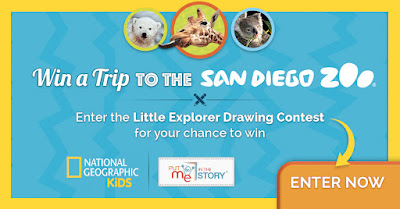 ENTER HERE PUT ME IN THE STORY AND NATIONAL GEOGRAPHIC KIDS PRESENT… THE LITTLE EXPLORER DRAWING CONTEST! Help us celebrate the new National Geographic Kids personalized books and the San Diego Zoo’s 100 th Anniversary! Enter the contest for your chance to win a trip to the San Diego Zoo to celebrate their 100 th anniversary! The San Diego Zoo has an extra special year of fun planned and we want YOU to be a part of it! With displays on Centennial Plaza, new film experiences, new shows and more, this year will be one of the most exciting at the San Diego Zoo! Contest Open: May 16 – July 8 To Enter: Adults 18+ can fill out the form on the contest page to enter. For EXTRA entries: Download the free coloring pages on the contest page and share a photo of your child’s drawing on their coloring page with the hashtag #ColorAndExplore on Twitter, Instagram, or Facebook! You can also upload the drawing to the photo gallery on the contest page. *S
Post a Comment
Read more
More posts