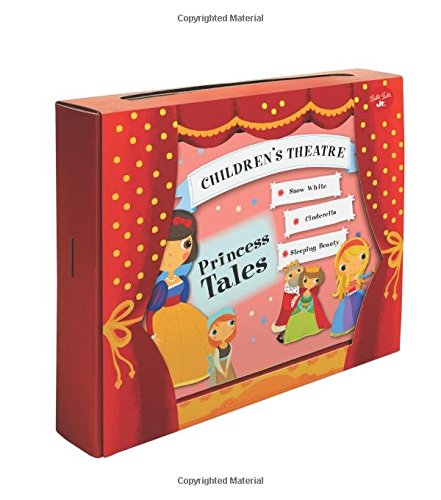 The Read & Play Puppet Theater series invites you to read and play along with your favorite fairy tales.

What better way to encourage creativity than through theater and play? Read & Play Puppet Theater invites you to read and play along with your favorite fairy tales. The illustrated box doubles as a theater stage and travel case for puppets, backdrops, and a book of three fairy tales - Cinderella, Snow White, and Sleeping Beauty. The stories are written to capture the attention of even the youngest children. Each tale includes a shortened script, giving children the opportunity to play the roles of director and actor. Just set up the pieces, get the puppets ready, and let the performance begin!

What a wonderful set!  Not only does this kit include a book with all three fairy tales (Cinderella, Snow White, and Sleeping Beauty), but the box turns into a small puppet theater.  In addition to the book and the box theater, the kit includes three double-sided backdrops, and the puppets to tell all three tales.  I also loved the fact that after each tale is told, instructions are given for which backdrops and puppets to use for each scene in telling the tale.  And of course children are bound to create their own stories using the different pieces which does indeed encourage creativity.  This is a fabulously interactive way to share stories with children.  I even had a blast playing with the materials.  While this doesn't really work for a library, it's a great addition to any home library. 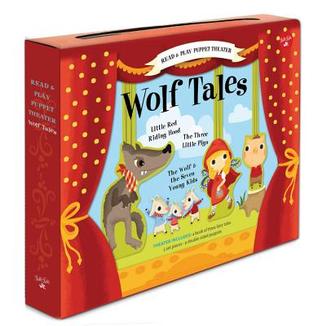 Read & Play Puppet Theater allows you to not only read your favorite fairy tales, but also act them out on stage!

Read & Play Puppet Theater allows you to not only read your favorite fairy tales, but also act them out on stage. The box can be used as a stage and contains puppets, set pieces, and a book of three fairy tales: Little Red Riding Hood, The Wolf and the Young Kids, and The Three Little Pigs. Each tale includes a shortened script and will capture the attention of event he youngest children. Just set up the pieces, get the puppets ready, and let the performance begin! The boxed set contains: a foldout puppet theatre, a book of three fairy tales with shortened scripts and prompts, 5 colorful set backdrops, and 9 double-sided paper puppets.

Wolf Tales is a fun collection of materials that allows young readers to become storytellers.  This kit includes not only a board book with the three stories in it (Little Red Riding Hood, The Wolf and the Young Kids, and The Three Little Pigs), but a box that turns into a stage, and backdrops (3 double-sided) and puppets.  I played with this with my four-year-old nephew and he loved it.  Naturally he wasn't so concerned with sticking to the original stories, but he had a great time with the puppets, backdrops and sets. He even asked for it again the next time I saw him. So I would say the kit is definitely a winner.  In addition to being a whole lot of fun to play with (the book gives instructions for retelling the stories, scene by scene), it would be great in the classroom for helping students learn to tell stories.  A great product that I can heartily recommend.
Favorite Series Favorites Interactive Books