PICTURE BOOK REVIEWS: Are We There Yet?/Hensel and Gretel Ninja Chicks 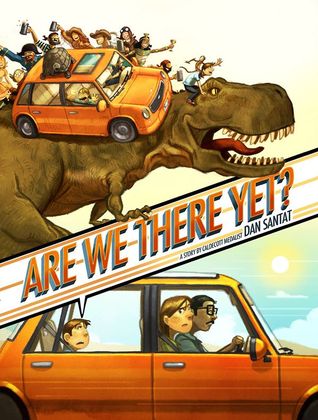 Caldecott Medalist Dan Santat takes readers on the road trip of a lifetime!

"Are we there yet?" Every parent has heard this classic kid question on a long car ride--and after reading this astonishingly inventive new book (that even turns upside down for several pages!), you'll never look at being bored the same way again.

Let's face it: everyone knows that car rides can be boring. And when things get boring, time slows down. In this book, a boy feels time slowing down so much that it starts going backward--into the time of pirates! Of princesses! Of dinosaurs! The boy was just trying to get to his grandmother's birthday party, but instead he's traveling through Ancient Egypt and rubbing shoulders with Ben Franklin. When time flies, who knows where--or when--he'll end up.

Dan Santat has chosen to address a pretty common childhood experience, but in a very uncommon way. On his way to his grandmother's birthday party, a young boy asks his parents, "Are we there yet?"  The looks on his parents' faces makes it clear this isn't the first time he has asked.  Like many people on a road trip, the boy has quickly become bored. But things pick up on the next spread as the boy lets his imagination go on a trip of its own.  These spreads where the boy imagines himself and his family in a variety of different stories makes for an interesting read aloud, as these pages are technically, upside down.  On the other hand it makes for a different sort of reading experience turning the book, end over end, almost like one feels on a mind-numbingly long road trip.  Another addition to the story is the QR codes included in some of the pictures which take the reader to games on the internet.  And I have to say that the ending is so typical of childhood that I literally laughed out loud.  Santat has created an imaginative, very relatable book about a common childhood experience turned on it's head. 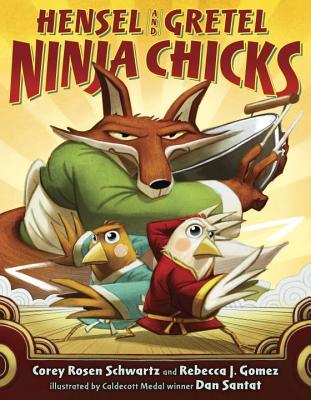 These ninja chicks are anything but chicken! When Hensel and Gretel's dad gets snatched by a fox, the sisters put their ninja skills to work to track him down before he can be stir-fried.But are these two little chicks ready to take on a dark tangled forest, a tricky house made of corn bread, and an even trickier fox?This plucky pair isn't giving up without a fight! KIYA!

Another book in the ninja fairy tales series by Schwartz, Gomez, and Santat is another winner as a read aloud.  Based on the fairy tale, Hansel and Gretel, with its own unique twist, the book is a whole load of fun for young ninja fans (and face it who isn't?)  Hensel and Gretel are two young hens who have lost their mother to the fox already and have taken to protecting their home and their father.  But when they return from the dojo to find their father missing and the house a mess, the set off into the forest to find him.  After their trail of breadcrumbs disappears and the hens become lost in the forest, Hensel loses her sense just long enough to become a captive of the fox.  But Hensel isn't giving up and neither is Gretel, and using their ninja skills they are just bound to come out on top.  Writing stories like this in rhyme can be a challenge.  For an action-packed story like this its important for the words to flow smoothly to keep up the pace.  The text here does just that making for a delightful read aloud. The text is also presented in such a way as to show the reader just where to read slower versus faster, louder versus softer for just the right effect resulting in a fun storytime experience for everyone involved.
2016 Books Favorite author favorite illustrator Great Read-a-louds picture books