Showing posts from June, 2018
Show all

WILD & WONDERFUL WEDNESDAY: Siege: How General Washington Kicked the British Out of Boston and Launched a Revolution

SIEGE How General Washington Kicked the British Out of Boston and Launched a Revolution by Roxane Orgill Candlewick Press, 2018 ISBN: 978-0-7636-8851-6 Source: ARC from publisher for review Ages 9-12 Middle grade nonfiction/free verse All opinions expressed are solely my own. ABOUT THE BOOK Step back to British-held Boston and hear the voices of citizens, militiamen, and redcoats at a turning of the tide in the American Revolution, brought to life in Roxane Orgill's deft verse. It is the summer of 1775. The British occupy Boston and its busy harbor, holding residents captive and keeping a strong military foothold. The threat of smallpox looms, and the town is cut off, even from food supplies. Following the battles of Lexington and Concord, Congress unanimously elects George Washington commander in chief of the American armed forces, and he is sent to Cambridge, Massachusetts, to transform the ragtag collection of volunteer militiamen into America's first
Post a Comment
Read more

MMGM: The Wishmakers by Tyler Whitesides

THE WISHMAKERS by Tyler Whitesides Harper, 2018 ISBN: 978-0-06-256831-1 Source: purchased Middle grade fantasy/speculative Ages 9-12 All opinions expressed are solely my own. ABOUT THE BOOK Ace unwittingly releases a genie from a peanut butter jar and gets unlimited wishes that he must learn to use with their consequences before all the world's cats and dogs turn into zombies who will eat mankind. REVIEW Having enjoyed Whitesides Janitors series I was thrilled to discover this new series.  The concept behind this new series is a clever one, one I haven't seen in any other book I've read.  Ace doesn't expect anything except peanut butter when he opens that peanut butter jar to make himself a sandwich.  But what he gets is a genie offering him as many wishes as he wants.  There are a couple of catches though.  First, each wish has a consequence accompanying it.  Some consequences are short term, some are permanent.  The bigger the wish, the more u
1 comment
Read more 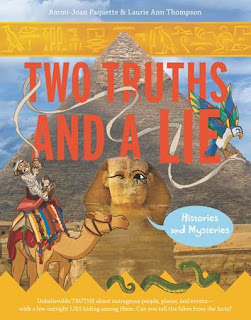 TWO TRUTHS AND A LIE: HISTORIES AND MYSTERIES By Ammi-Joan Paquette and Laurie Ann Thompson Walden Pond Press, 2018 ISBN:  978-0062418869 Publication Date: June 26, 2018 Source: publisher for review Ages 9-12 Middle grade nonfiction All opinions expressed are solely my own. ABOUT THE BOOK Unbelievable TRUTHS about outrageous people, places and events—with a few outright LIES hiding among them. Can you tell the fakes from the facts? Did you know that a young girl once saved an entire beach community from a devastating tsunami thanks to something she learned in her fourth-grade geography lesson? Or that there is a person alive today who generates her own magnetic field? Or how about the fact that Benjamin Franklin once challenged the Royal Academy of Brussels to devise a way to make farts smell good? Welcome to Two Truths and a Lie: Histories and Mysteries ! You know the game: Every story in this book is strange and astounding, but one out of every thre
Post a Comment
Read more

MIGHTY JACK by Ben Hatke First Second, 2016 ISBN: 978-1-62672-265-1 Source: purchased Graphic Novel Ages 9-12 All opinions expressed are solely my own. ABOUT THE BOOK Jack might be the only kid in the world who's dreading summer. But he's got a good reason: summer is when his single mom takes a second job and leaves him at home to watch his autistic kid sister, Maddy. It's a lot of responsibility, and it's boring, too, because Maddy doesn't talk. Ever. But then, one day at the flea market, Maddy does talk—to tell Jack to trade their mom's car for a box of mysterious seeds. It's the best mistake Jack has ever made. What starts as a normal little garden out back behind the house quickly grows up into a wild, magical jungle with tiny onion babies running amok, huge, pink pumpkins that bite, and, on one moonlit night that changes everything…a dragon. REVIEW Mighty Jack is a fun adventure which isn't surprising.  Fun stories are what
Post a Comment
Read more

HELLO LIGHTHOUSE by Sophie Blackall Little, Brown and Company, 2018 ISBN: 978-0-316-36238-2 Source: school library Ages 5 and up All opinions expressed are solely my own. ABOUT THE BOOK A new picture book that will transport readers to the seaside. Watch the days and seasons pass as the wind blows, the fog rolls in, and icebergs drift by. Outside, there is water all around. Inside, the daily life of a lighthouse keeper and his family unfolds as the keeper boils water for tea, lights the lamp's wick, and writes every detail in his logbook. REVIEW Sophie Blackall has created a truly beautiful book in this tale of life in a lighthouse.  I'll admit I've been in a lighthouse, and I couldn't do it.  The limited space and unlimited time to yourself would get to me very quickly.  Of course, lighthouses are run automatically these days, but I thoroughly enjoyed reading about what it was like to live in a lighthouse years ago when that was necessary to kee
1 comment
Read more

THE NIGHT DIARY by Veera Hiranandani Dial Books, 2018 ISBN: 978-0-7352-2851-1 Source: purchased Middle grade historical fiction Ages 9-12 All opinions expressed are solely my own. ABOUT THE BOOK It's 1947, and India, newly independent of British rule, has been separated into two countries: Pakistan and India. The divide has created much tension between Hindus and Muslims, and hundreds of thousands are killed crossing borders. Half-Muslim, half-Hindu twelve-year-old Nisha doesn't know where she belongs, or what her country is anymore. When Papa decides it's too dangerous to stay in what is now Pakistan, Nisha and her family become refugees and embark first by train but later on foot to reach her new home. The journey is long, difficult, and dangerous, and after losing her mother as a baby, Nisha can't imagine losing her homeland, too. But even if her country has been ripped apart, Nisha still believes in the possibility of putting herself back toget
Post a Comment
Read more

PICTURE BOOK REVIEWS: I Got It! by David Wiesner/Hello, Hello by Brendan Wenzel

I GOT IT! by David Wiesner Clarion Books, 2018 ISBN: 978-0-544-30902-9 Source: purchased Ages 5 and up All opinions expressed are solely my own. ABOUT THE BOOK David Wiesner presents a near-wordless account of the most suspenseful, nerve-wracking few seconds in a baseball game. The few seconds after the ball leaves the bat can be infinitely long. For this eager young outfielder, there's plenty of time to envision the increasingly fantastic and funny situations that might interfere with making the catch. Summoning determination and courage, he overcomes the imaginary obstacles and turns them into a springboard for success. REVIEW I'll admit the first time I read this I was reading it to a class of first graders.  I didn't have time to read and ponder it the way I should a Wiesner book.  So when a tree root and then a tree popped up in the baseball field, I wasn't quite prepared.  And then an enormous baseball appeared, and then the boy playing b
Post a Comment
Read more

ADVENTURE How Tiny Fish are Saving the World's Largest Rainforest Scientists in the Field by Sy Montgomery, photographs by Keith Ellenbogen Houghton Mifflin Harcourt, 2017 ISBN: 978-0-544-35299-5 Source: purchased Ages 9-14 MG/YA Nonfiction All opinions expressed are solely my own. ABOUT THE BOOK Considered the “lungs of the world,” the Amazon provides a full fifth of the world’s oxygen, and every year unsustainable human practices destroy 2.7 million acres. What can be done to help? That’s where Project Piaba comes in. Join the award-winning author Sy Montgomery and the photographer Keith Ellenbogen as they traverse the river and rainforest to discover how tiny fish, called piabas, can help preserve the Amazon, its animals, and the rich legacy of its people. Amazon Adventure is an eye-opening—and ultimately hopeful—exploration of how humanity’s practices are affecting and shaping not only the Amazon, but our entire environment. REVIEW The au
Post a Comment
Read more
More posts