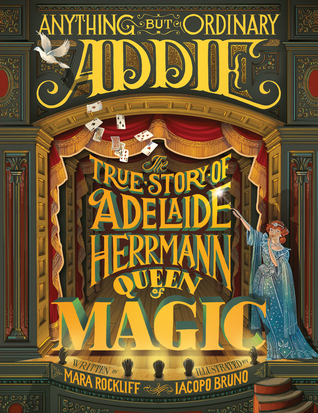 ANYTHING BUT ORDINARY ADDIE
The True Story of Adelaide Herrmann Queen of Magic
written by Mara Rockliff, illustrated by Iacopo Bruno
Candlewick Press, 2016
ISBN: 978-0-7636-6841-9
Picture Book
Ages 4 and up
Source: purchased
All opinions expressed are solely my own.

Be astonished and dazzled by the true story of Adelaide Herrmann, the Queen of Magic!

Some girls are perfectly happy never doing anything out of the ordinary. But Addie was anything but ordinary. She longed for thrills and excitement! At a time when a young lady appearing onstage was considered most unusual, Addie defied convention and became a dancer. And when she married the world-famous magician Herrmann the Great, she knew she had to be part of his show. Addie wanted to shock and dazzle! She would do anything to draw the crowds, even agree to be shot out of a cannon. But when Herrmann the Great died, Addie couldn’t disappoint her loyal fans — the show had to go on. What could she do? She would perform the show all by herself! From the creators of Mesmerized, this rollicking romp tells the true story of one fearless magician’s rise to glory, featuring exquisitely lavish illustrations by Iacopo Bruno. Extensive back matter, including instructions for performing one of Addie’s original tricks, makes this a dazzling celebration of one of the first female conjurers in show business.

I've developed a great admiration for authors and illustrators who take on biographies in the picture book format.  Decisions about what to include and what not to in a format that does not encourage long-windedness.  Creating an accurate picture of of a real person is such a short amount of space makes for a real balancing act.  But this one, by Mara Rockliff and Iacopo Bruno was absolutely delightful.  Not only is the woman an interesting one but the presentation makes for a fun read-a-loud and I adored the gorgeous illustrations.

Addie proved herself an adventurous woman from the time she was a young child.  She wanted to "astonish, shock, and dazzle." And she spent her life doing exactly that.  Even before she married a world famous magician, Addie loved to put on a show whether it was dancing, riding a bike or anything else she could come up with.  She loved doing magic with her husband, except for that dangerous bullet-catching trick. But when her husband unexpectedly dies, Addie steps forward to help the troupe survive.  But who would come see a woman magician?  Unless that woman magician were to perform the bullet-catching trick.

Bruno's gorgeous illustrations are as luminous as the woman he depicts.  Her fiery nature shows in her red hair and lively face.  The secondary characters are outlined in white creating the feeling of being on a stage. The bright colors and exciting word choices make this book a great example of a picture book biography that shines. 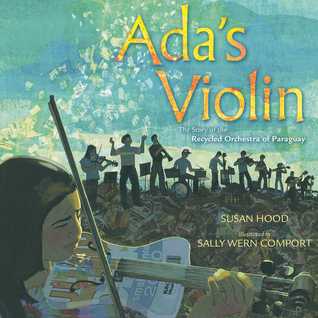 From award-winning author Susan Hood and illustrator Sally Wern Comport comes the extraordinary true tale of the Recycled Orchestra of Paraguay, an orchestra made up of children playing instruments built from recycled trash.

Ada Ríos grew up in Cateura, a small town in Paraguay built on a landfill. She dreamed of playing the violin, but with little money for anything but the bare essentials, it was never an option...until a music teacher named Favio Chávez arrived. He wanted to give the children of Cateura something special, so he made them instruments out of materials found in the trash. It was a crazy idea, but one that would leave Ada—and her town—forever changed. Now, the Recycled Orchestra plays venues around the world, spreading their message of hope and innovation.

I love stories like that told in Ada's Violin. While the story begins in a shantytown built around a garbage dump and seems like it will be depressing, that quickly changes when Favio Chavez arrives to teach the local children to play musical instruments.  The problem is that none of these children's families can afford a music instrument, especially since they are all struggling just to survive.  So, what do they do?  They create instruments out of garbage.  The ingenuity expressed in the creation of these instruments is truly inspiring. And Comport's beautiful illustrations show this wonderfully.  The amount of work the children and their teacher undergo to develop their musical ability in the midst of hardship and heat and the smell of garbage. Amazingly enough, this seemingly simple idea changed not only their town, but the world beyond.  I love stories like this one because they remind me that no matter how ugly the world can get, there is still hope. A beautifully told, truly inspiring true story about the impact that one person or small group of people can have on the world around them.