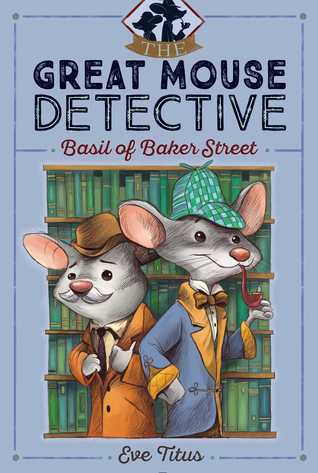 Named one of “13 Detective Book Series You Obsessed over as a Kid” by Buzzfeed.com and the inspiration for a hit Disney film, the masterful Great Mouse Detective series is now available to a whole new generation of readers!

Basil—the famous sleuth of mousedom—lives in the cellar of Sherlock Holmes’s house. A devoted admirer of the great detective, he has learned his craft by listening at the feet of Holmes himself. But will it be enough to help Basil solve his most baffling mystery yet?

The Mystery of the Missing Twins is one of the strangest cases in Basil’s career. With only a few crumbs of clues with which to find answers, how is he ever going to figure out where Angela and Agatha are being kept—and, of course, who mouse-napped them! Will Basil’s mouse sleuthing skills be up to the task of finding the twins before it’s too late?

As a big fan of Sherlock Holmes, I'm always intrigued when I hear about a new take on the most famous fictional detective of all time. And having seen the Disney animated version of The Great Mouse Detective, I was curious to see what this series was like.  And I quite enjoyed this first book in the series where the reader is first introduced to Basil, the mouse who lives in the cellar of Sherlock Holmes house on Baker Street, number 221B.  In this story, Basil and his associate Dr. Dawson set off to find a pair of mouse twins who have been kidnapped.  The story is simple enough to be easy to follow for those just being introduced to mysteries with enough details to demonstrate some of the skills for which Sherlock Holmes and by extension the deductive skills he is so famous for.  The story is short enough to be a quick read.  Dawson is a fun narrator whose own abilities help highlight his famous companion.  Basil of Baker Street makes for a enjoyable introduction to the mystery genre and a prelude to the more famous mysteries of Sherlock Holmes. 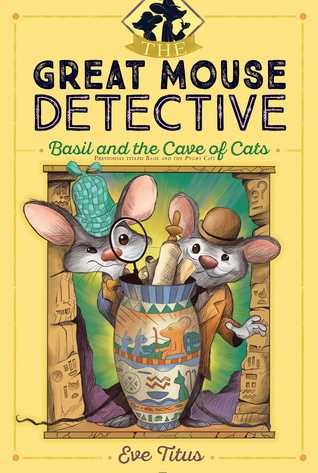 BASIL AND THE CAVE OF CATS
The Great Mouse Detective #2
by Eve Titus, illustrated by Paul Galdone
Aladdin, 2016 (reprint)
ISBN: 978-1-4814-6405-5
Middle Grade mystery
Ages 9-12
Source: purchased
All opinions expressed are solely my own.

Named one of “13 Detective Book Series You Obsessed over as a Kid” by Buzzfeed.com and the inspiration for a hit Disney film, the masterful Great Mouse Detective series is now available to a whole new generation of readers!

Basil the mouse detective sets off on a journey to solve one of the greatest mysteries of mousedom: Do miniature cats exist? Leading mouse scientists aren’t certain, but they believe that answers can be found in India.

As Basil sets sail for the Far East—and the lost island of Kataarh—danger stalks him at every turn. Will Basil successfully unravel the mystery of these mini-cats and their mouse king?

While I enjoyed this book and it's premise, sort of a children's version of Sherlock Holmes, I have some concerns about some of the content.  Maybe because it was published in the 1950s the content is seen as acceptable, but to me it rings a bit like the attitudes so prevalent during the colonial era, when powerful outside countries moved into smaller, supposedly less civilized countries and saved the so-called 'heathens'. This book unfortunately and probably inadvertently rings of some of that sort of attitude.  Part of the story focuses on archaeology which is fine in and of itself, but when Basil and his cohorts arrive at the island of Kataarh and start digging they discover the remains of a mouse city and somehow dig most of it out in a matter of days/weeks? But do they give the artifacts to the miniature cats to whom they belong? Nope, they load them up on their ship to take with them, despite the fact that Basil can speak the native language.  And the others, including Dawson take it on themselves to create a map of the island, naming features as they see fit because the cats seem 'dull-witted'and 'primitive' and immediately think Basil should be their king.

And the coincidences were a little hard for me to accept. For example, at one point in the story Basil and Dawson end up in the dungeon of a palace, which just happens to have an escape tunnel attached to it that leads them to their friend the Maharajah that they are there to rescue.  And Basil on board the ship Rosetta after leaving Bengistan somehow doesn't recognize his arch-enemy Ratigan in disguise?

In addition, everyone on the island ends up having to flee because of the erupting volcano, and Basil takes upon himself the job of 'king' to persuade the cats to leave with them, and then back in London, the mice decide how and where the cats are to live and the cats are simply 'content' with it all.  While the intentions of the book are good, I can't say that I can recommend this particular volume in the series.  This book contains too much that is reminiscent of colonial imperialism.
Middle Grade Mystery