Showing posts from 2021
Show all

MERRY WITCHMAS by Petrell Marie Ozbay and Tess La Bella illustrated by Sonya Abby Boyds Mill Press, 2021 Source: publisher for review Ages 4-8 All opinions expressed are solely my own. REVIEW Ginger, the witch, loves Halloween like her fellow witches, but she also loves Christmas.  But to her disappointment she's never had a visit from Santa.  In order for him to find her, he has to believe in witches or he can't see her village.  In an effort to get him to visit, she writes a letter including a map.  Santa is a bit startled when her letter arrives magically and he has to decide if he will believe in her or not.  This reversal of the story of belief makes for a fun and colorful read.  The illustrations contain many fun details mixing witches and Christmas decor.  A monster wreath, skeleton gingerbread, and hot chocolate in a caldron all make for a smile-inducing read.  This delightful twist on Christmas makes for a different sort of storytelling that young listeners are bound t
Post a Comment
Read more

WHERE'S WALDO? Santa Spotlight Search by Martin Handford Candlewick Press, 2021 ISBN: 978-1-5362-2013-1 Source: publisher for review (THANKS!) Ages 8-12 All opinions expressed are solely my own. REVIEW In my experience, many children love these search and find type books.  And since I grew up with Waldo it's fun to look at these titles that bring back memories of those times I spent looking at these books.  This Waldo book offers a bit of a difference challenge.  Going beyond just finding Waldo and his friends, the book includes a 'spotlight searcher' that is inserted behind a plastic darkened screen on each spread.  The searcher lights up as the reader moves it around.  The fun thing about it is that the 'wand' allows the reader to focus on small parts of the page which makes it a bit easier to find the items.  For young readers who love the challenge of looking for specific items in the pictures this book can provide hours of fun, as long as the wand doesn'
Post a Comment
Read more

PICTURE BOOK BIOGRAPHIES: Dr. Fauci by Kate Messner & The Girl Who Could Fix Anything by Mara Rockcliff 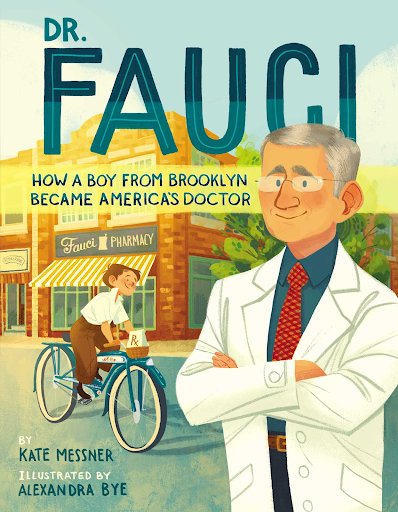 DR. FAUCI: How a Boy from Brooklyn Became America's Doctor by Kate Messner, illustrated by Alexandra Bye Simon and Schuster Books for Young Readers, 2021 ISBN: 9781665902434 Source: publisher for review Ages 4-8 All opinions expressed are solely my own. ABOUT THE BOOK The definitive picture book biography of Dr. Anthony Fauci, the director of the National Institute of Allergy and Infectious Diseases and one of the most crucial figures in the COVID-19 pandemic. Before he was Dr. Fauci, director of the National Institute of Allergy and Infectious Diseases, Anthony Fauci was a curious boy in Brooklyn, delivering prescriptions from his father’s pharmacy on his blue Schwinn bicycle. His father and immigrant grandfather taught Anthony to ask questions, consider all the data, and never give up—and Anthony’s ability to stay curious and to communicate with people would serve him his entire life. This engaging narrative, which draws from interviews the author did with Dr. Fauci himself, foll
Post a Comment
Read more 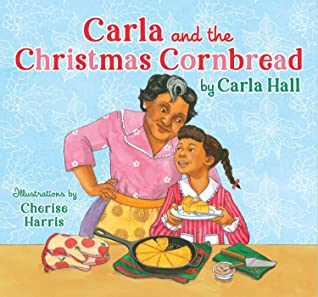 CARLA AND THE CHRISTMAS CORNBREAD by Carla Hall, illustrations by Cherise Harris Simon & Schuster Books for Young Readers, 2021 ISBN: 978-1-5344-9469-5 Source: publisher for review Ages 4-8 All opinions expressed are solely my own. ABOUT THE BOOK In this heartwarming tale inspired by her childhood, superstar chef and TV host Carla Hall shares the story of young Carla, who eats a sugar cookie meant for Santa on the night before Christmas and tries to make things right. Christmas is Carla’s favorite holiday of the year. She goes to her grandparents’ house and eats grandma’s special recipe—a perfectly delicious cornbread. She listens to her grandpa Doc’s marvelous stories about traveling the world. And, best of all, she spends lots of time with her family. But when Carla accidentally takes a bite out of Santa’s sugar cookie, she thinks she’s ruined Christmas. How will Santa know to stop at their house if they don’t leave him a midnight snack? With her grandmother’s help, Carla comes u
Post a Comment
Read more

AMARI AND THE NIGHT BROTHERS by B.B. Alston Balzer & Bray, 2021 ISBN: 978-0-06-297516-4 Source: purchased Ages 9-12 All opinions expressed are solely my own. ABOUT THE BOOK Quinton Peters was the golden boy of the Rosewood low-income housing projects, receiving full scholarship offers to two different Ivy League schools. When he mysteriously goes missing, his little sister, 13-year-old Amari Peters, can’t understand why it’s not a bigger deal. Why isn’t his story all over the news? And why do the police automatically assume he was into something illegal?  Then Amari discovers a ticking briefcase in her brother’s old closet. A briefcase meant for her eyes only. There was far more to Quinton, it seems, than she ever knew. He’s left her a nomination for a summer tryout at the secretive Bureau of Supernatural Affairs. Amari is certain the answer to finding out what happened to him lies somewhere inside, if only she can get her head around the idea of mermaids, dwarves, yetis and magi
Post a Comment
Read more 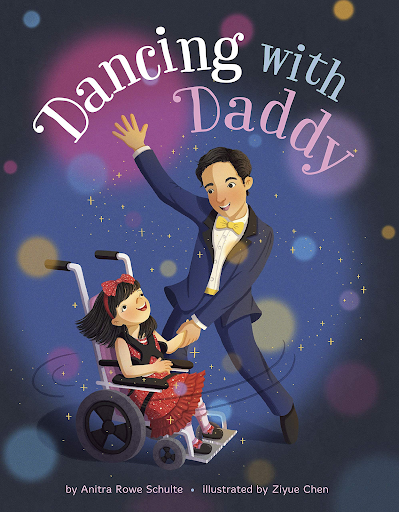 DANCING WITH DADDY by Anitra Rowe Schulte, illustrated by Ziyue Chen two lions, 2021 ISBN: 978-1542007191 Source: Blue Slip Media Ages 4-8 All opinions expressed are solely my own. ABOUT THE BOOK Elsie can’t wait to go to her first father-daughter dance. She picked out the perfect dress and has been practicing swirling and swaying in her wheelchair. Elsie’s heart pirouettes as she prepares for her special night. With gestures, smiles, and words from a book filled with pictures, she shares her excitement with her family. But when a winter storm comes, she wonders if she’ll get the chance to spin and dance her way to a dream come true.  ★“Refreshingly, Elsie’s disability is seamlessly presented as simply another aspect of family life…As she swings and sways in her father’s arms, her forehead against his, their love is palpable; Chen’s illustrations fairly glow with affection…A heartwarming portrayal of a family embracing disability.” ―Kirkus Reviews (starred review) “[Anitra] Rowe Schult
Post a Comment
Read more

YOUNG ADULT NONFICTION: Gone to the Woods by Gary Paulsen 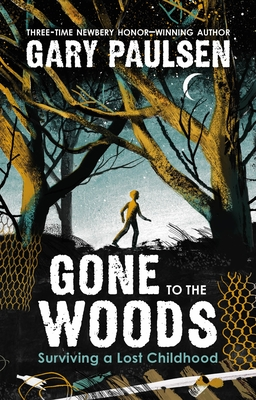 GONE TO THE WOODS Surviving a Lost Childhood by Gary Paulsen ISBN: 978-0-374-31415-6 Source: public library Ages 14 and up All opinions expressed are solely my own. ABOUT THE BOOK A middle grade memoir, giving readers a new perspective on the origins of Gary Paulsen's famed survival stories. His name is synonymous with high-stakes wilderness survival stories. Now, author Gary Paulsen portrays a series of life-altering moments from his turbulent childhood as his own original survival story. If not for his summer escape from a shockingly neglectful Chicago upbringing to a North Woods homestead at age five, there never would have been a Hatchet. Without the encouragement of the librarian who handed him his first book at age thirteen, he may never have become a reader. And without his desperate teenage enlistment in the Army, he would not have discovered his true calling as a storyteller. REVIEW When I first started reading Gone to the Woods , I wasn't sure that I was going to like
Post a Comment
Read more 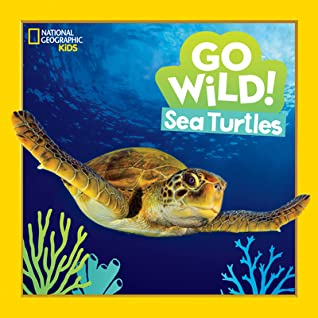 GO WILD! SEA TURTLES by Jill Esbaum National Geographic Kids, 2021 ISBN: 978-1-4263-7158-5 Source: Media Masters Publicity Ages 6-9 All opinions expressed are solely my own. ABOUT THE BOOK Welcome to the wild world of sea turtles! In this intro to the species, youngsters discover where on Earth this reptile lives, what it eats, and how big it grows. Cool photos of all the different kinds of sea turtles and adorable photos of just-hatched turtle babies bring the creatures into full focus. After learning the basics, young readers will learn why sea turtles need our help and what people around the world are doing to help save them. Filled with fun facts, games, and an activity focused on making a difference in sea turtles' world, Go Wild! will inspire kids to care about this swimmingly cute animal. REVIEW With its stunning design and fascinating facts, Go Wild! Sea Turtles  is a great book for young reptile lovers.  The gorgeous photograph and attractive book design are sure to catch
Post a Comment
Read more

MIDDLE GRADE/YOUNG ADULT NONFICTION: The Curse of the Mummy by Candace Fleming 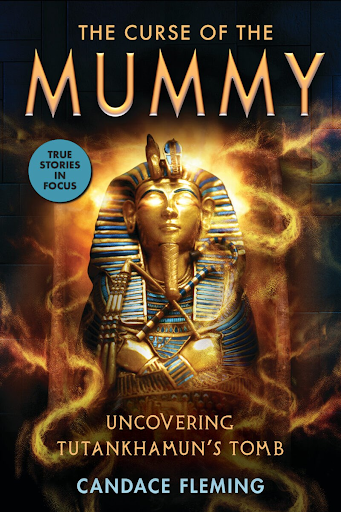 THE CURSE OF THE MUMMY Uncovering Tutankhamun's Tomb by Candace Fleming Scholastic Focus, 2021 ISBN: 978-1-338-59661-8 Source: purchased Ages 10-14 All opinions expressed are solely my own. ABOUT THE BOOK The true story of the search for Tutankhamun's tomb, the Western public's belief that the dig was cursed, and the battle for ownership of the treasures within. During the reign of the New Kingdom of Egypt, the boy pharaoh Tutankhamun ruled and died tragically young. In order to send him on his way into the afterlife, his tomb was filled with every treasure he would need after death. And then, it was lost to time, buried in the sands of the Valley of the Kings. His tomb was also said to be cursed. Centuries later, as Egypt-mania gripped Europe, two Brits -- a rich earl with a habit for gambling and a disreputable, determined archeologist -- worked for years to rediscover and open Tutankhamun's tomb. But once it was uncovered, would ancient powers take their revenge for
Post a Comment
Read more 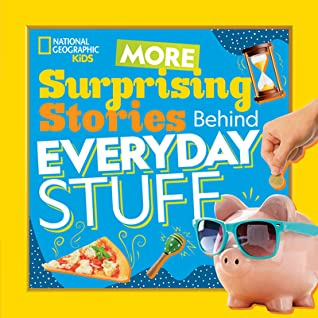 MORE SURPRISNG STORIES BEHIND EVERYDAY STUFF by Stephanie Warren Drimmer National Geographic Kids, 2020 ISBN: 978-1-4263-3865-6 Source: Media Masters Publicity Ages 9-12 All opinions expressed are solely my own. ABOUT THE BOOK Ever wonder how haunted houses got their spooky rep; where cheese originally came from; and when and where people decided hitting a tiny ball with a long stick (ahem, golf?) was their idea of fun? Prepare to be amazed by the surprising backstories behind the things you use or do every day! From familiar foods and common clothing items to bizarre beauty regimens and quirky products, this book covers all your burning questions: Who thought of that? Where did that come from? Why is that a thing? This riveting little treasure is jam-packed with awesome facts, fun stories, and colorful visuals. Once you know all this cool stuff about the origins of everyday stuff, you can "wow" your friends and family. REVIEW Each of the chapters in More Surprising Stories B
Post a Comment
Read more 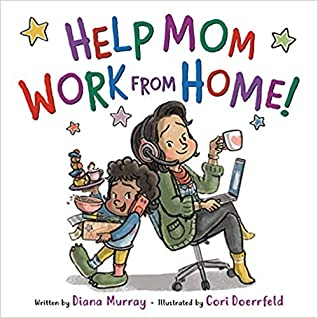 HELP MOM WORK FROM HOME! written by Diana Murray, illustrated by Cori Coerrfeld Little, Brown and Company, 2021 ISBN: 978-0-316-27365-7 Source: publisher for review Ages 4-8 All opinions expressed are solely my own. ABOUT THE BOOK For fans of Boss Baby and How to Babysit a Grandma comes an entertaining read aloud for parents working from home with their little ones.  Mom works at home all week long, and her little one is right by her side. After all, she's a natural boss at organizing, leading meetings, and making calls—or so it seems. But when Mom starts looking frazzled, her little helper knows just how to make it all better.  Diana Murray's rollicking rhyme paired with Cori Doerrfeld's energetic and adorable illustrations will bring parent and child together after a long work day. ABOUT THE AUTHOR & ILLUSTRATOR Diana Murray grew up in New York City and still lives close with her husband, two daughters, and bearded dragon. Some of Diana’s previous works include: City
Post a Comment
Read more
More posts