Showing posts from September, 2016
Show all

THE PREHISTORIC MASTERS OF LITERATURE Jurassic Classics by Saskia Lacey Walter Foster, Jr., 2016 ISBN13: 9781633220980 Ages 9-12 Source: publisher for review All opinions expressed are solely my own. ABOUT THE BOOK Read classic literature from the eyes of the dinosaurs, and learn about the literary greats through humorous, prehistoric mashups and fun, dinosaur-themed facts. Jurassic Classics: The Prehistoric Masters of Literature mixes prehistoric dinosaur humor with some of the great names of literary history to teach the classics in a fun and inviting way for children of all ages. The first book in a new series, The Prehistoric Masters of Literature, features an assortment of well-known, classic authors, such as the Bronte sisters, Jane Austen, and William Shakespeare, all under the guise of favorite dinosaur mashups (i.e. the "Brontesaurus" sisters). The Prehistoric Masters of Literature features a brief "dino" biography of each aut
1 comment
Read more

THE LATE JURASSIC Ancient Earth Journal Notes, Drawings, and Observations from Prehistory by Juan Carlos Alonso & Gregory S. Paul Walter Foster Jr., 2016 ISBN: 978-1-63322-108-6 Ages 8 and up Source: publisher for review All opinions expressed are solely my own. ABOUT THE BOOK Through detailed illustrations and descriptive narrative, readers will experience a thrilling, thoroughly enjoyable ride through the most popular time period of prehistory. What would it be like to see a living, breathing dinosaur? Following in the footsteps of Ancient Earth Journal: The Early Cretaceous, this next installment, The Late Jurassic, will take readers further back in time to a period when giants ruled the land and early mammals began to secure their place alongside the dinosaurs. The Late Jurassic period was home to many species of our favorite dinosaurs, such as Apatosaurus (or Brontosaurus), Allosaurus, and Stegosaurus, to name a few. The Late Jurassic includes the latest
1 comment
Read more 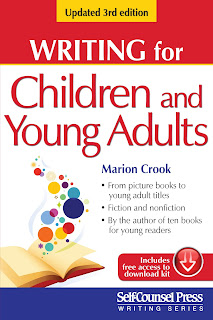 WRITING FOR CHILDREN AND YOUNG ADULTS by Marion Crook Self Counsel Press, 2016 Source: ebook from publisher for review September 20, 2016 (ebook) October 2016 (paperback) ABOUT THE BOOK In addition to the expert advice author Marion Crook shared in earlier editions of Writing for Children and Young Adults, in this vibrant new edition, Crook explains some of the nuances and choices about the writing world online. As well, she revisits the fundamentals of writing: establishing character, creating lively dialogue and developing plot with updated worksheets and examples. This edition shows the writer how to begin a story, plan plot, develop and hone the work for an agent or publisher, and how to make the crucial submission for a book that agents want to represent and publishers want to buy! Writing for Children and Young Adults helps you create the manuscript that sells! Amazon Barnes & Noble Chapters Indigo ABOUT THE AUTHOR Marion Crook has writt
1 comment
Read more

MMGM: The Curse of the Were-Hyena by Bruce Hale

THE CURSE OF THE WERE-HYENA A Monstertown Mystery by Bruce Hale Disney-Hyperion, 2016 ISBN: 978-148471325-9 Source: Blue Slip Media Ages 9-12 Middle grade speculative (fantasy) All opinions expressed are solely my own. ABOUT THE BOOK What do you do when your favorite teacher starts turning into a were-hyena? a) Flee in terror? b) Try to cure him? c) Bring him carrion snacks? Mr. Chu, the coolest teacher ever, has developed some very unusual habits, like laughing hysterically for no reason, sniffing people's homework, and chasing chickens. When best friends Carlos and Benny decide to find out what's happening to him, they get caught up in some moonlight madness. And it looks like just the beginning of the weirdness that has arrived in the town of Monterrosa. . . . This first entry in a silly, sassy, and suspenseful new series will leave readers howling with laughter. ABOUT THE AUTHOR Edgar-nominated author Bruce Hale is passionate about inspiri
Post a Comment
Read more

FRANCINE POULET MEETS THE GHOST RACCOON Tales from Deckawoo Drive #2 by Kate DiCamillo, illustrated by Chris Van Dusen Candlewick Press, 2015 ISBN: 978-0-7636-6886-0 Ages 6-8 Source: purchased All opinions expressed are solely my own. ABOUT THE BOOK Deckawoo Drive’s intrepid Animal Control Officer meets her match—or does she? A funny, heartfelt, and fast-paced romp from the National Ambassador for Young People’s Literature. Francine Poulet is the greatest Animal Control Officer in Gizzford County. She hails from a long line of Animal Control Officers. She’s battled snakes, outwitted squirrels, and stared down a bear. "The genuine article," Francine’s dad always called her. She is never scared—until, that is, she’s faced with a screaming raccoon that may or may not be a ghost. Maybe Francine isn’t cut out to be an Animal Control Officer after all! But the raccoon is still on the loose, and the folks on Deckawoo Drive need Francine back. Can she face her fe
1 comment
Read more

RANGER RICK: National Parks! by Stacy Tornio & Ken Keffer Muddy Boots, 2016 ISBN: 978-1-63076-230-8 Middle grade nonfiction Ages 9-12 Source: publisher for review All opinions expressed are solely my own. ABOUT THE BOOK From the crown jewels such as Yellowstone, Sequoia, and the Grand Canyon, to the many lesser-known but still stunning areas dotting the country, the National Parks have provided generations with enjoyment and wonder. Now, Ranger Rick: National Parks! takes readers on a tour of America s most beautiful protected landscapes. Join Ranger Rick as he leads this cross-country adventure and provides his favorite facts, animals, and plants along the way. Page after page of beautiful photography and fascinating information bring the most unique features of the National Parks to life. Inside you ll also find Ranger Rick s favorite things to do in each park, like sledding down the mighty sand dunes in Great Sand Dunes National Park or exploring the bat-fill
Post a Comment
Read more

PICTURE BOOK REVIEWS: They All Saw a Cat/Cleonardo

THEY ALL SAW A CAT by Brendan Wenzel Chronicle Books, 2016 ISBN: 978-1-4521-5013-0 Ages 4-8 Source: purchased All opinions expressed are solely my own. ABOUT THE BOOK The cat walked through the world, with its whiskers, ears, and paws . . . In this glorious celebration of observation, curiosity, and imagination, Brendan Wenzel shows us the many lives of one cat, and how perspective shapes what we see. When you see a cat, what do you see? REVIEW Brendan Wenzel has created a delightfully intriguing story about the way a cat is seen as it stalks through the world.  The wide variety of images and styles makes for some real eye candy.  This book begs to be a starting point for a great discussion about point-of-view and how everyone and everything sees the world a bit differently based on both nature and nurture.  A child, a dog, a fox, and a fish all see the cat in very different ways, even the cat itself doesn't see what the other animals see.  A fun activity to d
1 comment
Read more

FULL OF BEANS by Jennifer Holm Random House, 2016 ISBN: 978-0-553-51036-2 MG Historical Fiction Ages 9-12 Source: purchased All opinions expressed are solely my own. ABOUT THE BOOK Newbery Honor Book Turtle in Paradise is beloved by readers, and now they can return to this wonderful world through the eyes of Turtle’s cousin Beans. Grown-ups lie. That’s one truth Beans knows for sure. He and his gang know how to spot a whopper a mile away, because they are the savviest bunch of barefoot conchs (that means “locals”) in all of Key West. Not that Beans really minds; it’s 1934, the middle of the Great Depression. With no jobs on the island, and no money anywhere, who can really blame the grown-ups for telling a few tales? Besides, Beans isn’t anyone’s fool. In fact, he has plans. Big plans. And the consequences might surprise even Beans himself. REVIEW Jennifer Holm has written another really appealing historical fiction novel based on her family history.  While I
Post a Comment
Read more

BLOG TOUR: The Last Messenger of Zitol by Chelsea Dyreng

THE LAST MESSENGER OF ZITOL by Chelsea Dyreng Sweetwater Books, 2016 ISBN: 978-1-4621-1896-0 YA Fiction Source: publisher for review All opinions expressed are solely my own. ABOUT THE BOOK When Rishi is kidnapped and taken to Zitól, she faces an unthinkable future: she is to be sacrificed to appease the gods. To survive in this place, where greed, lust, and fear eclipse compassion, Rishi befriends the selfish and ignorant king, only to discover that he may not have the power to save her after all. REVIEW I found The Last Messenger of Zitol  a compelling read from the very first page, where Nadal, the king of Zital begins the story.  I found it rather interesting that the selfish, ignorant king is the one telling the story, but since he's clearly telling the story after the fact it created interest for me rather than confusion.  It gave the story added dimension by allowing the reader to really see and feel the changes that Nadal undergoes.  Rishi, on the other
Post a Comment
Read more

EDEN'S ESCAPE (Eden of the Lamp #2) By M. Tara Crowl From Disney-Hyperion Release Date: September 6, 2016 Ages 9-12 Eden's new life on earth begins in New York City under the guidance of her new guardian: Pepper, a petite, bubbly genie alum who's also a Broadway actress. Before she has a chance to settle in, though, Eden is whisked away for a granting--only to find herself trapped in a laboratory. David Brightly, owner of the world's leading tech company, cares more about tapping into the lamp's power than making a wish and starts performing tests on Eden. With Brightly's plasma shield around the lamp, Eden has no way home. Left without a choice, she escapes the lab and goes on the run. After her daring exit, Eden finds herself on the streets of Paris--home to Electra's headquarters. Left in a strange city with a price on her head (courtesy of scheming Brightly), Eden has to keep her wits about her. She dons a chic disguise and flits aro
Post a Comment
Read more
More posts