Showing posts from July, 2015
Show all

DANGER IN ANCIENT ROME Ranger in Time #2 by Kate Messner, illustrated by Kelley McMorris Scholastic Press, 2015 Genre:  historical fantasy (time travel) Ages 7-10 Source: purchased All opinions expressed are solely my own. ABOUT THE BOOK Ranger, the time-traveling golden retriever, is back for the second book in Kate Messner's new chapter book series. This time, he's off to save the day in ancient Rome! Ranger is a golden retriever who has been trained as a search-and-rescue dog. In this adventure, Ranger travels to the Colosseum in ancient Rome, where there are gladiator fights and wild animal hunts! Ranger befriends Marcus, a young boy Ranger saves from a runaway lion, and Quintus, a new volunteer gladiator who must prove himself in the arena. Can Ranger help Marcus and Quintus escape the brutal world of the Colosseum? REVIEW Messner has created an enjoyable early chapter book series that combines the adventures of a dog with history.  What a fun way
Post a Comment
Read more 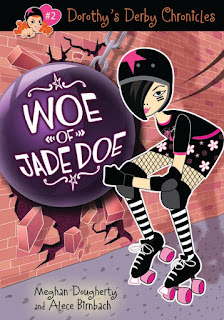 Dorothy’s Derby Chronicles: Woe of Jade Doe By Meghan Dougherty Illustrated by Alece Birnbach August 4, 2015; ISBN 9781492601470 Book Information: Title: Dorothy’s Derby Chronicles: Woe of Jade Doe Author: Meghan Dougherty Release Date: August 4, 2015 Publisher Sourcebooks Jabberwocky Summary: When times get tough, just keep skating… Ever since Dorothy joined the Slugs & Hisses Derby team, her life has been one adventure after another. Dorothy’s onetime enemy Alex is now a friend, while her friend Jade keeps missing practices. Then the skating rink shuts down, and Dorothy’s life becomes as jumbled as a derby jam. And that’s not to mention the bizarre things happening to anyone who enters the rink (maybe it’s haunted?)… Can Dorothy restore order to the new life she’s finally settling into, or will her world become a crazy mess she can’t skate away from? Goodreads Link:   https://www.goodreads.com/book/show/25782850-dorothy-s-derby-chronicles-
Post a Comment
Read more

DIRTMEISTER'S NITTY GRITTY PLANET EARTH by Geologist Steve Tomecek (aka The Dirtmeister), illustrated by Fred Harper National Geographic, 2015 ISBN: 978-1-4263-1903-7 Middle Grade Nonfiction Ages 9 and up Source: publisher for review All opinions expressed are solely my own. ABOUT THE BOOK Come and explore the world under your feet with the Dirtmeister and friends! Part graphic novel, part fun guidebook, this very cool, rocky journey introduces both eager and reluctant readers to the basic geologic processes that shape our Earth. Clear and concise explanations of the various geologic processes reveal the comprehensive science behind each fascinating topic. Fun facts and simple DIY experiments reinforce the concepts while short biographies of important scientists inspire future geo-scientists. REVIEW I've long been a fan of National Geographic books for kids and this book is another wonderful example of why that is the case.  Steve Tomecek (aka The Dirtme
Post a Comment
Read more

“Are You My Mother?” meets “I Want My Hat Back” in the hilarious new picture book, Max the Brave (Sept. 8), by author and illustrator Ed Vere. Follow fearless Max as he encounters every other creature except the one he’s searching for…mouse. Check out the trailer! Max the Brave is a brilliant new picture book from Ed Vere. This is Max. Max the Brave, Max the Fearless, Max the Mouse-catcher...But, in order to be a Mouse-catcher, Max needs to know what a mouse is, so off he goes to find out. This hilarious new picture book from the phenomenally-talented Ed Vere introduces a new and lovable character, with Ed's trademark bold illustrations and clever story. Other Ed Vere titles to look out for: Banana; Bedtime for Monsters; Mr. Big; The Getaway Ed Vere studied fine art at Camberwell College of Art and has been writing and illustrating children's books since 1999. He is published in both England and the US. Ed is also a painter, working from his studio in east London and is rep
Post a Comment
Read more

THE FIVE O'CLOCK GHOST The Haunted Library #4 by Dori Hillestad Butler Grosset & Dunlap, 2015 ISBN: 978-0-448-46248-6 Ages 7-9 Source: purchased All opinions expressed are solely my own. ABOUT THE BOOK Kaz and Claire are back for a timely mystery in this adorable series by Edgar Award winner Dori Hillestad Butler! Kaz and Claire are called in for another ghostly mystery, and this ghost is always right on time. When Claire's friend tells the young detectives about his five o'clock ghost, Kaz wonders if it could be his own missing brother, Little John. Kaz and Claire search the house up and down, but they can't find any trace of Little John--or any other ghost. Yet when five o'clock comes along, the strange occurrences come back again... REVIEW The Haunted Library   series is one of my favorite series for young readers.  Not only are they easy to read but the mysteries are interesting and the characters fun.  I was a bit startled when I thou
1 comment
Read more

SERAFINA AND THE BLACK CLOAK by Robert Beatty Disney Hyperion, 2015 ISBN: 978-1-4847-0901-6 Middle Grade Fantasy Source: ARC from publisher for review All opinions expressed are solely my own. ABOUT THE BOOK "Never go into the deep parts of the forest, for there are many dangers there and they will ensnare your soul." Serafina has never had a reason to disobey her pa and venture beyond the grounds of Biltmore Estate. There's plenty to explore in the shadowed corridors of her vast home, but she must take care to never be seen. None of the rich folk upstairs know that Serafina exists; she and her pa, the estate's maintenance man, have secretly lived in the basement for as long as Serafina can remember. But when children at the estate start disappearing, only Serafina knows who the culprit is: a terrifying man in a black cloak who stalks Biltmore's corridors at night. Following her own harrowing escape, Serafina risks everything by joining for
1 comment
Read more

UNTAMED The Wild Life of Jane Goodall by Anita Silvey National Geographic, 2015 ISBN: 978-1-4263-1518-3 Source: publisher for review All opinions expressed are solely my own. ABOUT THE BOOK Jane Goodall, one of the most recognized scientists in the Western world, became internationally famous because of her ability to observe and connect with another species. A girl of humble beginnings and training, she made scientific breakthroughs thought impossible by more experienced field observers when she was only in her twenties. Then these animals shaped Jane's life. She began tirelessly fighting to protect the environment so that chimpanzees and other animals will continue have a place and a future on our planet. Jane Goodall continues to leave the modern world with an extraordinary legacy and has changed the scientific community forever. REVIEW Jane Goodall's work with chimpanzee's is well known.  I remember hearing about it from the time I was a child.
Post a Comment
Read more

JACK The true story of JACK & THE BEANSTALK by Liesl Shurtliff Alfred A. Knopf, 2015 ISBN: 978-0-385-75579-5 Middle grade fantasy Ages 8 and up Source: purchased All opinions expressed are solely my own. ABOUT THE BOOK Jack has always been told that giants are not real. But if that’s the case, how do you explain the huge, foot shaped pond in the yard, or the occurrence of strange and sudden storms in which the earth quakes and dirt rains from the sky? When his father is carried away in such a storm, Jack gives chase in the only logical way: by trading the family cow for some magic beans that will give him access to a land beyond the clouds. He arrives to find that the giants themselves have giant-sized troubles. With the help of an overachieving little sister, a magic goose and a chatty cook (who is not interested in grinding human bones into bread, thank you very much!) Jack sets out to save his dad and save the day.   REVIEW After reading Shurtliff'
1 comment
Read more

HUMPHREY'S PLAYFUL PUPPY PROBLEM Humphrey's Tiny Tales #2 by Betty G. Birney, illustrated by Priscilla Burris Puffin Books, 2014 ISBN: 978-0-14-751484-4 Ages 5-8 Source: purchased All opinions expressed are solely my own. ABOUT THE BOOK Everyone’s favorite classroom pet is now starring in chapter books!   Humphrey, the classroom hamster of Room 26, loves spending weekends with his classmates. This week, he is going home with Richie. Humphrey is going to help him with his science experiment (hamsters LOVE-LOVE-LOVE to be helpful).   But Humphrey finds a surprise at Richie’s house. Poppy the puppy is bouncy and barky and is eager to play—a little  too  eager, Humphrey thinks. Humphrey needs to get out of his cage to help Richie, but can he do that and stay out of Poppy’s way at the same time?   With adorable illustrations and an easy reading level, Humphrey’s Tiny Tales are just right for emergent readers. REVIEW Humphrey's Tiny Tales  takes the origi
Post a Comment
Read more

CHASING CHEETAHS: The Race to Save Africa's Fastest Cats by Sy Montgomery, photographs by Nic Bishop Houghton Mifflin Harcourt, 2014 ISBN: 978-0-547-81549-7 Middle Grade Nonfiction Ages 10 and up Source: purchased All opinions expressed are solely my own. ABOUT THE BOOK  Since the year 1900, cheetah footprints quickly dwindled in African dirt as the species plummeted from more than 100,000 to fewer than 10,000. At the Cheetah Conservation Fund's (CCF) African headquarters in Namibia, Laurie Marker and her team save these stunning, swift, and slender creatures from extinction. Since the organization's start in 1990, they've rescued more than 900 cheetahs, most of whom have been returned to the wild.      But this arduous challenge continues. For most African livestock farmers, cheetahs are the last thing they want to see on their properties. In the 1980s, as many as 19 cheetahs per farmer died each year. Cheetahs were considered vermin--but, in lear
Post a Comment
Read more

TOP SECRET FILES: The Cold War Secrets, Special Missions & Hidden Facts about the CIA, KGB, and MI6 by Stephanie Bearce Prufrock Press, 2015 ISBN: 978-1-61821-419-5 Middle Grade Nonfiction Ages 10-14 Source: ARC from publisher for review All opinions expressed are solely my own. ABOUT THE BOOK Poison dart umbrellas, lipstick pistols, and cyanide guns were all a part of the arsenal of tools used by spies of the Soviet KGB, American CIA, and British MI6, but you won't learn that in your history books! Learn the true stories of the Cold War and how spies used listening devices planted in live cats and wristwatch cameras. Discover how East Germans tried to ride zip lines to freedom, while the Cambridge Four infiltrated Britain and master spy catchers like Charles Elwell were celebrated. Then make your own secret codes and practice sending shoe messages. It’s all part of the true stories from the Top Secret Files: The Cold War. Take a look if you dare, but be ca
Post a Comment
Read more
More posts