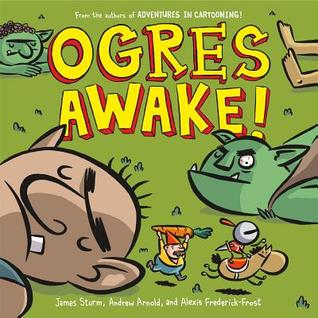 The knight and her horse, Edward, have made a startling discovery: there are three huge ogres asleep at her doorstep! When they wake up, the kingdom is in big trouble! The knight, Edward, and some garden gnomes fight back, not with swords and shields, but with potato peelers and spoons. It turns out that ogres are pretty friendly when they have full stomachs!

This new addition to the Adventures in Cartooning series presents the knight and her horse, Edward with a new challenge.  When the knight spots the ogres sleeping, she knows that they will soon show up at the castle.  Naturally, her first inclination is to prepare to fight them, but the king has another plan in mind.  I really appreciated the fact that while the knight's first inclination is to fight, that is not the wiser king's plan. So many books, movies, TV show, and other forms of media suggest that fighting/violence is the solution to one's problems, especially if one is being threatened with violence.  I appreciated the fact that this story shows the value of trying other solutions first.  Most of this book is the story, but the end pages show how to draw the knight, Edward, the gnomes, and ogres.  This is a short fun comic book style read for younger readers who aren't yet ready for full-length graphic novels.  This may also send young readers looking for the longer and more detailed original stories that not only tell stories but also teacher how to create comics.  A fun new addition to the series.
Graphic Novels Great Teaching Books