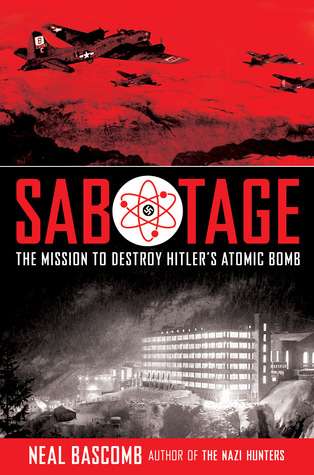 Neal Bascomb delivers another nail-biting work of nonfiction for young adults in this incredible true story of spies and survival.

The invasion begins at night, with German cruisers slipping into harbor, and soon the Nazis occupy all of Norway. They station soldiers throughout the country. They institute martial rule. And at Vemork, an industrial fortress high above a dizzying gorge, they gain access to an essential ingredient for the weapon that could end World War II: Hitler’s very own nuclear bomb.

When the Allies discover the plans for the bomb, they agree Vemork must be destroyed. But after a British operation fails to stop the Nazis’ deadly designs, the task falls to a band of young Norwegian commandos. Armed with little more than skis, explosives, and great courage, they will survive months in the snowy wilderness, elude a huge manhunt, and execute two dangerous missions. The result? The greatest act of sabotage in all of World War II.

Stories like this one are among my favorite to read because they are real.  The remarkable nature of what happened and the dedication and sacrifices made by those involved are fascinating.  And in this book Bascomb tells the story of a lessor known series of events that played an important part in the Allied victory during World War II.

The development of atomic physics during World War II was something both sides pursued.  Bascomb presents a basic description of where things stood among the Germans as the war advanced.  The production of heavy water at Vemork in Norway made it a valuable resource for the Germans once they invaded the country.  Leif Tronstad, a Norwegian professor, recognized the danger in letting the Germans have access to so much heavy water (used in creating nuclear power).  Getting himself out of the country and to Britain he helped set up the missions directed at stopping the production of heavy water at Vemork.

Bascomb tells a fascinating story about the men directly involved in the missions to destroy the heavy water and the incredible sacrifices they made.  This is a book that shows the power of a few to make a difference and the damage that war does to everyone.  The combination of science and history makes this a great book for young adult readers who are interested in either and a great resource for teachers.