Enter the pages of the Dragonthology. No single story has ever been great enough to contain the mystical, wondrous creature known as the dragon. We assembled the greatest draconian tales and put them between the covers of a single tome to satisfy your hunger for everything dragon. Seven magnificent stories, ranging from science fiction to mystery, await you within.

The Case of the Bloodstone Dragon by G.L. Jackson

A washed up has been, Private Investigator Clark is down to his last $100. That is, until the night a mysterious femme fatale walks through his door weaving a tale of intrigue in hope of recovering an artifact steeped in mystery and danger. What follows is a raucous ride through a little known human and
dragon history, played out on the streets of New York City.

Unto the Breach by Jason Andrew

Jonathan Heller uncovers an unusual secret during one of the bloodiest campaigns of World War One in the middle of horrific trench warfare. Can he convince an ancient dragon that humanity is worthy of life during their darkest hour?

The Dragon of Sullivan Hall by Marian Allen

A dormitory full of fun loving female students, an angry red dragon with a litter full of hungry whelps, and a particular student of Irish descent. This
won't end well for the dragon.

A lonely smuggler must make decisions he never dreamt possible in the darkness of space to elude capture and protect his precious cargo of dragon eggs. When one of them hatches, it threatens to damage his ship. Can a person change enough to save a ship, a dragon, and himself?

The Clan by Troy Lambert

Dragons return to the earth and humanity enslaves them with the last remnants of technology of their dying race. Now the technology of old is fading. Will the dragons be able to rise again? Will the humans declare war, or will a peaceful solution be found? It all rests in the hands of an ancient dragon, and a
lowly shepherd and his clan.

What happens when a dragon falls ill and is told he will die in a year and a day unless he finds his one true love? The only thing a dragon can do. He sets out on a quest to win the hand of the perfect mate for a dragon–the daughter of the king. Aided by a Quetzal bird sorcerer, he begins his quest. An old fashioned fairy tale with a Meso-American twist.

In a land where children are warriors and the only adults are mythical creatures, all are called to fight the Darkness. Til and her dragon partner, Heliodor, complete the perfect Welcome Ceremony, but their joy is short lived. The Dark has slain a unicorn and taken her foal back to the Darklands. Can Til and Heliodor venture where none go and rescue the young unicorn? 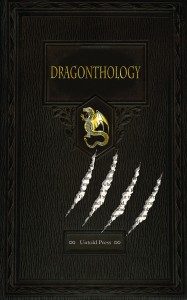 I'm not usually a huge fan of short stories, there not usually long enough to satisfy my taste. I love detail and the chance to really get to know the characters before the story ends. But I quite enjoyed these stories about dragons.  Each story is so radically different from the others, it was fascinating to see each author's take on dragons for both good and evil. I found each story compelling and easy to read. These would be perfect stories for reluctant readers who have a hard time with a full length fantasy novel but who love dragons. I'm not sure I can say which one is my favorite, each story has something to recommend it, whether based on folklore or the author's imagination. I do have to say though that I thought the first story which combines a detective noir story with dragons who look similar to people was particularly entertaining. The overall writing was good and I only found a couple of errors. I also appreciated the author's comments on why they wrote the story the way they did. I always find that fascinating.

Be sure to take a look at the Blog Tour page