BLOG TOUR and GIVEAWAY: The Adventures of Tilda Pinkerton by Angela Shelton 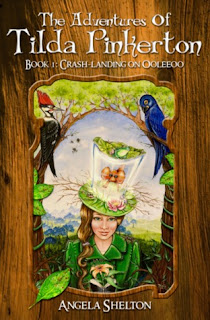 A modern Mary Poppins in space.

In the middle of cosmic danger, the electrifying secret that Tilda Pinkerton, the magical hat maker, hides from the children she teaches - becomes her most miraculous gift, securing the safety of the planet she crashes on.

Somewhere out in the Sombrero Galaxy, Tilda Pinkerton–mystical maker of mysterious, magnificent, magical hats–is being hunted by the Keeper of Darkness.

Yet Tilda simply does not recall, at all, after taking a tremendous fall.

No one on Ooleeoo, where Tilda crash-landed, knows she is from another planet. Only Star Jumper Randy can tell her—but he’s light years away, frantically searching for his missing love, desperate that without her, the entire galaxy soon may be lost.

Even in the middle of cosmic danger, Tilda loves to create hats, for which she has a rare and uncanny knack. All who receive them sparkle, in fact—and spark their innermost talent. With a Tilda hat, people can suddenly do whatever they dream of, causing brilliant ideas to grow madly.

With Gladys the toad, who thinks she’s a cat, and Frank the fish, who lives in her hat, Tilda must discover who she is and what her enemy wants from her so badly.

But the Mayor of Moodle has other plans, including a ban on all wearing of hats, everywhere on Ooleeoo. His dark and forbidding actions seem to coincide with something unworldly, threatening all with a nameless dread and slowly blacking out the sky. With Ooleeoo itself turning upside down, how can anyone survive?

In this first in a series of Tilda Pinkerton adventures, Tilda must fight the battle of her life and risk all—even the galaxy and stars—by revealing her most electrifying secret.

Angela Shelton is an author, actor, and public speaker. She has been writing since she was eight years old. Her first novel was adapted into the movie Tumbleweeds. Angela won a regional Emmy award for her portrayal of Safe Side Superchick in The Safe Side video series created by Baby Einstein’s Julie Clark.

After living in Los Angeles for over a decade, Angela left the big city for a one-light country town to marry her first love and fulfill her dream of writing books in a barn house.

Why Reading should be your New Year's Resolution

With the end of the world upon us, or past us if you're reading this - there's no time like the present to make a new commitment.

We have plenty of commitments to others from work to Facebook updates to online timed twitter chats!

Most of the commitments to ourselves in the New Year involve ellipticals and rowing machines and everything in between. Why be so hard on yourself? You're fabulous and you're pretty! (and I bet a bit witty.)

Read a Bit More – tis Good for the Soul

I suggest reading more be on your New Year's Resolution list. Don't be so hard on yourself - as we all tend to be. I do not mean adding a stack of 25 books a month or joining a club that sends emails to you once a day to remind you how far behind you are.

Simply read a bit more. It's as good for your brain as the red carpet is for the movie star.

Words can enlighten and entertain and sometimes even take away pain.

Words are so powerful, in fact, that Tilda Pinkerton (the heroine in her own adventure books) urged her friend Umberto to collect them.

To quote The Adventures of Tilda Pinkerton:
​“All because of you,” Umberto said. “Let me give you all a tour.” Xena took Quinn’s hand as they followed Umberto and Tilda toward the towering ice walls, each twice as tall as any of them. They were lined in sheet rows, some leaning to the side, others straight, but all touching to create halls of ice so clear, they looked like perfect, pristine glass. “I collect all the missed, misplaced, misused and miscellaneous thoughts lost in space,” he elaborated upon entering the maze of words and phrases. Suspended inside of each piece of icy wall were sayings and words in every kind of language, on every type of paper and font.

​“My favorites are words that are lost, such as here,” he pointed to a word frozen at eye level.

“Flippercanorious. It means elegant, like you, Miss Tilda.” He smiled.

​“Flippercanorious—tripping off the tongue, and sonorous! I must remember to say it two times a day, at least.”

​“You were right … so much is out there. Every idea, every thought, every musing and wish. As you taught me once, I’ve discovered it is true: every thought we have exists. It’s alive, it becomes, even though one doesn’t see it. And thoughts travel faster than the speed of light.”

Read More and Feed Your Brain

During times when the news can put you into a depression, not to mention the recession - reading a new bounty of words in your life will help put a barrier against more strife. Maybe even a daily grin, which is how all of our days should begin.

Reading also inspires you to write. Perhaps it’s time for you – yes you – to write your book. The avenues words can take are endless. Discover new bits of glee as you go off on your reading spree.
I don’t mean to be pushy or mean so I will join you on this reading adventure in 2013!

There were things that I really enjoyed about this book.  I loved the idea of magical hats that help bring out a person's natural talents.  I also loved Tilda's tree, what a fabulous place to live!  I liked how she integrated a lot of unusual words into the text while providing definitions (it was nice not to have to look things up).  It was clear the author spent a lot of time coming up with names that fit each of her characters. Tilda's pets, Frank and Gladys (a fish and a toad that thinks she's a cat) added plenty of heart and humor. There is a typical good versus evil story line with the added complication that Tilda doesn't remember her part it in or even that it is going on because of an accident that occurs early in the story. While I would have liked to have had more detail, I like lots of details in my fantasies, it helps me visualize the world better, and the character development could have been stronger, overall it's a nice read with lots of magic and plenty of humor, not to mention lots of cool words.