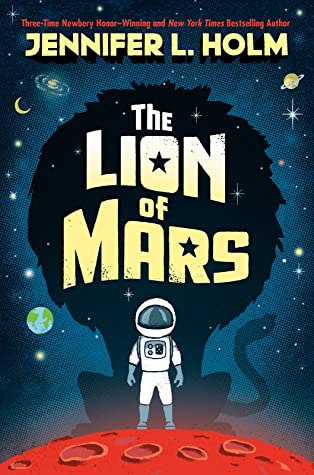 THE LION OF MARS
by Jennifer L. Holm
Random House, 2021
ISBN: 978-0-593-12181-8
Source: purchased
Ages 9-12
All opinions expressed are solely my own.
ABOUT THE BOOK
Bell has spent his whole life - all eleven years of it - on Mars. But he's still just a regular kid - he loves cats, any kind of cake, and is curious about the secrets the adults in the US colony are keeping. Like, why don't have contact with anyone on the other Mars colonies? Why are they so isolated? When a virus breaks out and the grown-ups all fall ill, Bell and the other children are the only ones who can help. It's up to Bell - a regular kid in a very different world - to uncover the truth and save his family ... and possibly unite an entire planet.
REVIEW
Jennifer Holm has outdone herself with her new book.  The characters are appealing, especially Bell, the setting is fascinating, and the situation is compelling.  Bell tells the story from his eleven-year-old point of view, which gives the story a very different vibe than if one of the older characters told the story.  There's a lot Bell doesn't know, such as why Trey, who he considers his best friend, chose to move into a different room, and why Sai, the commander, refuses to let them have any contact with the other settlements.  But with the help of Leo, the cat, and Phinneus, the gardener, Bell likes his life on Mars.  But after the kids swipe a rover to go check out a mysterious object that crashed nearby and things go wrong, the tension between the grownups and the kids grows.  And when the grownups all get sick the children are left to keep things running.  Eventually, they realize they need help and the only possibility is one of the nearby settlements.  But they've been told over and over again to stay away.
I truly loved this book.  Bell's a great character with his innocent ways and big heart.  The other characters had depth, including the adults.  The couple who called each other "Peanut Butter" and "Jelly" made me laugh out loud.  Each of the characters has their own troubles while they also share the struggle to keep the settlement running with little outside help other than a supply ship that comes every two years.  The book feels quite real and the kids have normal concerns, Flossy obsesses over fashion trends, Vera wants more independence, Trey wants to be Sai's apprentice, Albie struggles with growing responsibilities, and Bell wonders why Trey doesn't seem to want to be friends anymore.  But they have to come together when a crisis strikes.  I appreciated the blend of both external and internal struggles on the part of the characters.  Brilliant touches of humor and heart make the book stand out as Bell and his companions must work together like a pride of lions in order to survive on a planet so very far from Earth and Earth concerns.  A definite favorite.
2021 books 2021 favorites Favorite author middle grade sci fi Middle Grade Speculative