EARLY CHAPTER BOOKS FANTASY FICTION : The Princess in Black and the Giant Problem by Shannon Hale & Skunk and Badger by Amy Timberlake 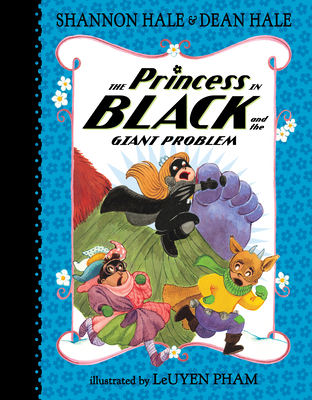 THE PRINCESS IN BLACK AND THE GIANT PROBLEM
by Shannon Hale & Dean Hale, illustrated by LeUyen Pham
Candlewick Press, 2020
ISBN: 978-1-5362-0222-9
Source: purchased
Ages 7-9
All opinions expressed are solely my own.
ABOUT THE BOOK
The Princess in Black is ready for her snowy play date with the Goat Avenger and the Princess in Blankets. It's a perfect day to build snow monsters and battle them for practice. But just when they're about to wage battle, a huge foot smashes their snow monster. "SQUASHY!"

It's a giant, and it's smashing everything in its path! The giant is too strong for the three friends, so the Princess in Blankets has an idea: it's time to light the Sparkle Signal and summon help. With a rising crescendo of a plot and a delightfully surprising ending, the latest adventure in the New York Times best-selling series features all the Princess in Black's friends as heroes for the first time.
REVIEW
The Princess in Black series is truly one of my favorite early chapter book series.  With delightful characters, interesting adventures, and gorgeous full-color illustrations, these tales of a girl who is both a superhero and a princess are perfect for young readers.  This particular tale presents the Princess in Black with her greatest challenge yet, one that she won't be able to meet without the help of her friends (who are also princesses in disguise, except the Goat Avenger).  The Princess in Black is enjoying a fun romp in the snow with the Goat Avenger and the Princess in Blankets when a giant smashes the snow monster they are building.  As the giant keeps smashing things, the three friends try desperately to stop him, but are unsuccessful, though they do manage to save the goats.  Only when they send for help does it become possible to solve this gigantic problem.  With lots of humor and heart, the Hales & Pham take the reader on another delightful adventure with the Princess in Black and her allies.  I especially get a kick out of the creative costumes and identities the characters assume.

SKUNK AND BADGER
by Amy Timberlake with pictures by Jon Klassen
Algonquin Young Readers, 2020
ISBN: 978-1-64375-005-7
Source: purchased
Ages 7-9
All opinions expressed are solely my own.
ABOUT THE BOOK
Wallace and Gromit meets Winnie-the-Pooh in a fresh take on a classic odd-couple friendship, from Newbery Honor author Amy Timberlake with full-color and black-and-white illustrations throughout by Caldecott Medalist Jon Klassen.

No one wants a skunk.

They are unwelcome on front stoops. They should not linger in Important Rock Rooms. Skunks should never, ever be allowed to move in. But Skunk is Badger’s new roommate, and there is nothing Badger can do about it.

When Skunk plows into Badger’s life, everything Badger knows is upended. Tails are flipped. The wrong animal is sprayed. And why-oh-why are there so many chickens?

Newbery Honor author Amy Timberlake spins the first tale in a series about two opposites who need to be friends.

Skunk and Badger is a book you’ll want to read, reread, and read out loud . . . again and again.
REVIEW
Skunk and Badger reminds me a bit of Arnold Lobel's Frog and Toad books.  Except Badger and Skunk aren't friends for most of the book.  Badger enjoys living by himself, it allows him to spread his stuff throughout the house he borrows from Aunt Lulu.  That way he can focus on his 'important rock work'.  When Aunt Lulu gives Skunk permission to move in, Badger struggles to adapt.  Especially when he discovers Skunk's numerous chicken friends.  The last straw comes when Skunk uses his special talent to get rid of a Stoat and Badger gets caught in the middle.  Badger loses his temper driving Skunk away.  Can Badger repair the damage or is Skunk gone for good?  Anyone who's had to adapt to new living arrangements can relate to the adjustments that Badger and Skunk have to make and the tensions it creates.  Klassen's illustrations nicely compliment the interactions between the two main characters.  And while I found the inclusion of the chickens odd, it works all right.  A nice read for youngsters who prefer more character-based stories about relationships and change.
2020 books Early Chapter Books Early Chapter Fantasy