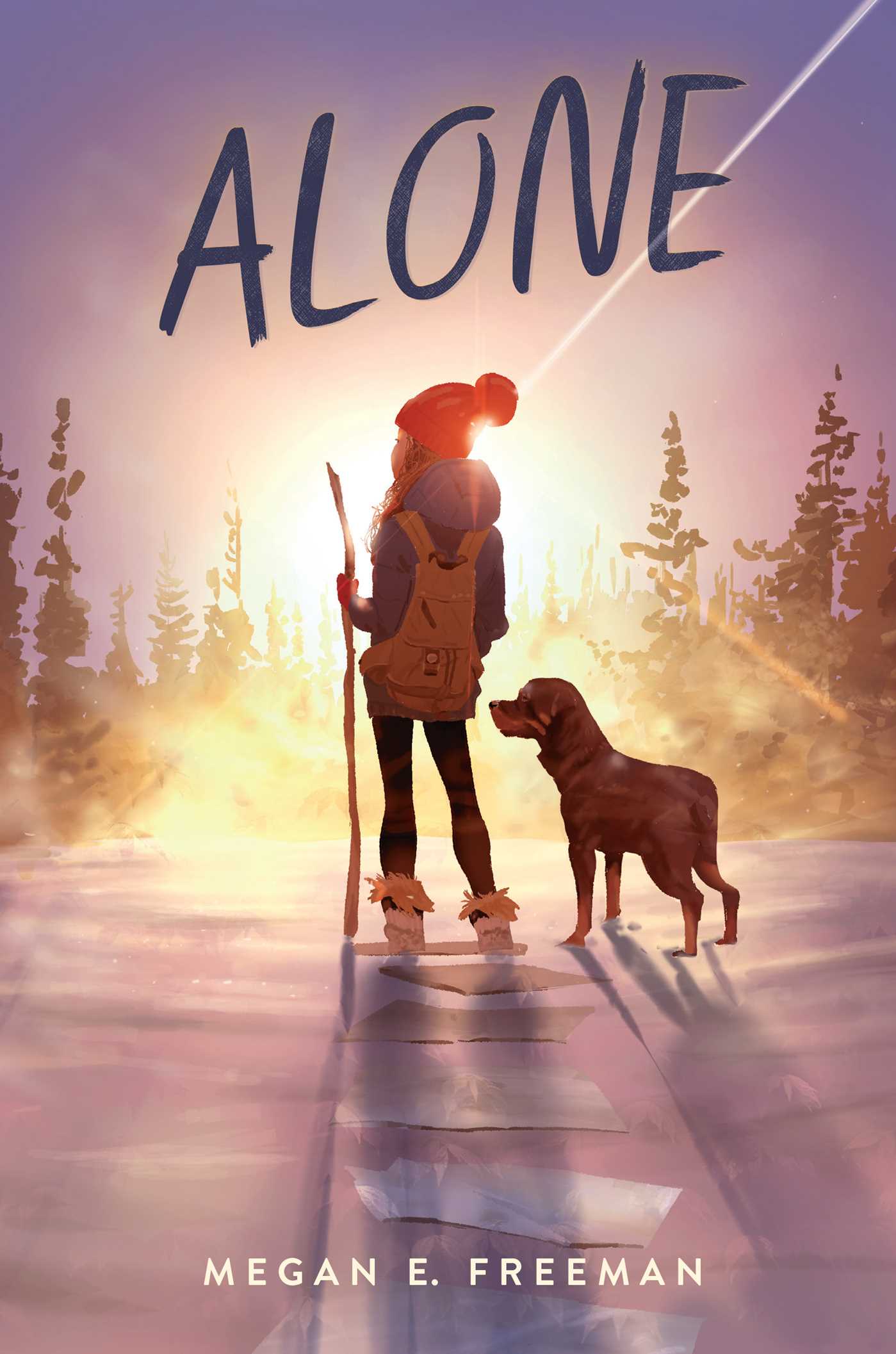 ALONE
by Megan E. Freeman
Aladdin, 2021
ISBN: 9781534467569
Source: ARC from publisher for review
Ages 9-12
All opinions expressed are solely my own.
ABOUT THE BOOK
When twelve-year-old Maddie hatches a scheme for a secret sleepover with her two best friends, she ends up waking up to a nightmare. She’s alone—left behind in a town that has been mysteriously evacuated and abandoned.

With no one to rely on, no power, and no working phone lines or internet access, Maddie slowly learns to survive on her own. Her only companions are a Rottweiler named George and all the books she can read. After a rough start, Maddie learns to trust her own ingenuity and invents clever ways to survive in a place that has been deserted and forgotten.

As months pass, she escapes natural disasters, looters, and wild animals. But Maddie’s most formidable enemy is the crushing loneliness she faces every day. Can Maddie’s stubborn will to survive carry her through the most frightening experience of her life?
REVIEW
Maddie's courage shines through as she faces a challenge of enormous proportions. Maddie's  pretty typical young teen as she balances time with her dad's family and time with her mom's family.  She's interested in spending time with her friends and starting to find her mother a bit irritating.  A sneaky plan to have a sleepover with her two BFFs at her grandparent's empty summer apartment turns disastrous when she ends up alone after the entire city is evacuated without her knowledge.
Suddenly, Maddie's forced to take care of herself and a neighbor's abandoned Rottweiler named George.  Yet with shelter and food and water taken care of she wrestles with the devastating impact of being utterly alone.  She has to not only scavenge water and food and eventually heat when the power goes out, but she must find a way to sustain herself mentally and emotionally as well.
Freeman's free verse poetry superbly tells of Maddie's struggles as she tries to maintain hope that someone will return for her.  I found Maddie entirely believable and a character that could root for completely.  Maddie's ingenuity in finding ways to take care of herself was impressive.  And my heart went out to her in her desperate loneliness as she tried to maintain her mental and emotional health.  I also found it fascinating to see what happened to the animals and the city itself after it was abandoned.  The additional disasters that Maddie faces make for a compelling plot which is necessary since the only one Maddie has to talk to is George.
A compelling tale of survival in the face of great loneliness that is remarkably relevant to current events.  Highly recommended.
ABOUT THE AUTHOR
Megan E. Freeman attended an elementary school where poets visited her classroom every week, and she has been a writer ever since.  She writes middle grade and young adult fiction.  Megan is also a Pushcart Prize-nominated poet.  An award-winning teacher with decades of classroom experience, Megan taught multiple subjects across the arts and humanities to students of all ages.  She lives near Boulder, Colorado.  Visit her online at MeganEFreeman.com.
AUTHOR'S GUEST POST: The Story Behind the Story: ALONE by Megan E. Freeman
Inspiration can come from anywhere: a current event, a memory, a curiosity, a voice. In the case of my novel, ALONE, it came with a question asked in a mother-daughter book club.

My daughter was in fifth grade when our book club read Island of the Blue Dolphins by Scott O’Dell. The girls were fascinated by how the main character, Karana, could survive on an island all by herself. For those of us reading in suburban Colorado, living alone on an island seemed like an insurmountable challenge, let alone for eighteen years. We would be completely out of our elements, like Brian in Hatchet or Tom Hanks in Castaway. But as the girls were talking, I realized Karana’s story was different. The island was her home and she was already comfortable there. Her challenge was less about the island and more about being alone and reinventing her life without the rules and safeguards her community had provided.

I asked the girls in the club a question. What if they came home from school one day to find everyone in the entire town gone? What if they couldn't reach anyone for help? What if no one came back? What would they do and how would they survive? We had a lively discussion, but the questions stayed with me long after the book club had moved on to other authors and other stories. What if? I walked around my town seeing everything through the eyes of someone left behind. I imagined different opportunities and challenges. I wondered what it would be like for a middle school kid to have to survive on their own.

Eventually, I began wondering on the pages of my writer’s notebook. I sat down at the kitchen table and wrote the first scene with Maddie and her mother. To create Maddie’s circumstances, I blatantly stole from my daughter’s life. Her dad and I lived in different houses and she went back and forth between us every other week. Her grandparents kept an apartment in our town but they traveled and were often away. By using these real-life parameters, I invented a blended family for Maddie and orchestrated an opportunity for her to have a secret sleepover without her parents knowing where she was. While she slept, the town was evacuated without her.

In the story, Maddie spends her first few days alone assuming her family will come right back. She finds a companion in George, the neighbor’s rottweiler. Then the power grid shuts down, removing potential for communication, as well as comforts like electricity and plumbing. The stakes are raised and Maddie is forced to think more strategically and creatively. She can no longer take things like food and water for granted, but she also has to wrestle with decisions about what to do next. She has to weigh the different implications of every choice, while trying to imagine what her parents would want her to do.

As the story unfolds, Maddie endures natural disasters and narrowly escapes encounters with looters and wild animals. She debates whether to venture beyond the town in search of help or to stay put. Each new season brings unexpected challenges that require her to invent solutions, take risks, and face the existential void of loneliness that is her new reality.

Once I had the basic plot established, I did many rounds of revisions. I first wrote the story in prose, third person voice, and past tense. That form allowed for a straightforward unfolding of the story’s arc, but the voice felt flat. It felt more like watching a documentary than being inside the intimate experience of a character. After working with it for a while and seeking feedback from wise and wonderful readers, I started over, this time tapping into my experience and skill as a poet. I rewrote the story in verse, using first person voice and present tense. The poetry invited me inside Maddie's head, heart, and body, and better allowed me to explore the solitary and sensory nature of her experience. The verse brought texture and nuance and emotional resonance that had been missing. It also helped solve some of the challenges of spanning so much time in so few words. Poems became transitions between seasons and aided in the three-dimensional world building that is so important to any setting. In the poetry, I finally found the voice for the story I wanted to tell.

Throughout all the different iterations of the project, I never lost interest in the possibilities for answers to the question I explored with those fifth grade readers in our little book club. It’s the one question guaranteed to leave me wonder-filled with inspiration.