NONFICTION MONDAY: Shackles from the Deep/The March Against Fear 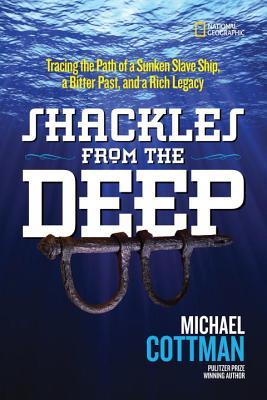 SHACKLES FROM THE DEEP
Tracing the Path of a Sunken Slave Ship, a Bitter Past, and a Rich Legacy
by Michael H. Cottman
National Geographic, 2017
ISBN: 978-1-4263-2663-9
YA Nonfiction
Ages 12-18
Source: Media Masters Publicity
All opinions expressed are solely my own.

A pile of lime-encrusted shackles discovered on the seafloor in the remains of a ship called the Henrietta Marie, lands Michael Cottman, a Washington, D.C.-based journalist and avid scuba diver, in the middle of an amazing journey that stretches across three continents, from foundries and tombs in England, to slave ports on the shores of West Africa, to present-day Caribbean plantations. This is more than just the story of one ship it's the untold story of millions of people taken as captives to the New World. Told from the author's perspective, this book introduces young readers to the wonders of diving, detective work, and discovery, while shedding light on the history of slavery."

Many ships have sunk into the ocean over the years, but the Henrietta Marie carries special significance because of what she carried inside her hull in the years before her sinking.  The Henrietta Marie was a slave ship, used to transport people into slavery and away from their homes on the West African shore.  This book though is more about the experiences of the author, journalist Michael Cottman, as he learned about the ship's origins and travels.  While there is little hope of discovering the specific individuals who sailed as slaves on the Henrietta Marie, Cottman still feels the connection to his own ancestors as he travels to England, Africa, and Jamaica, following the long distant travels of the ship.  This reads a lot like a memoir as Cottman documents his thoughts and feelings as he visited the different locations of significance to the building and sailing of this slave ship.  Reading this book reminded me of my own ancestors and how I feel when I visit places they've been, and how I would like to one day visit some of the other places of significance to them.  I appreciated the inclusion of a few photographs, it helped make the text seem more real, more would have been nice though. 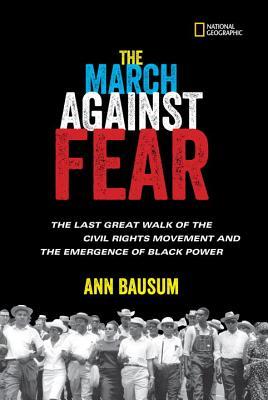 THE MARCH AGAINST FEAR
The Last Great Walk of the Civil Rights Movement and the Emergence of Black Power
by Ann Bausum
National Geographic, 2017
ISBN: 978-1-4263-2665-3
Ages 12-18
YA Nonfiction
Source: Media Masters Publicity
All opinions expressed are solely my own.

James Meredith's 1966 march in Mississippi began as one man's peaceful protest for voter registration and became one of the South's most important demonstrations of the civil rights movement. It brought together leaders like Martin Luther King Jr. and Stokely Carmichael, who formed an unlikely alliance that resulted in the Black Power movement, which ushered in a new era in the fight for equality.

The retelling of Meredith's story opens on the day of his assassination attempt and goes back in time to recount the moments leading up to that event and its aftermath. Readers learn about the powerful figures and emerging leaders who joined the over 200-mile walk that became known as the "March Against Fear."

Thoughtfully presented by award-winning author Ann Bausum, this book helps readers understand the complex issues of fear, injustice, and the challenges of change. It is a history lesson that's as important and relevant today as it was 50 years ago.


Ann Bausum has told a powerful story about an event I knew next to nothing about, the 1966 March Against Fear, begun by James Meredith and his followers, finished by Martin Luther King Jr., Stokely Carmichael, and other heavyweights of the Civil Rights Era.  But unlike the second march from Selma to Montgomery, Alabama, this march did not go off without a hitch.  There were a lot of problems, including disagreements between the leaders, local Mississippi police who were reluctant to provide protection and cities that refused to let the marchers use public land in any way.  James Meredith's original intent: demonstrating that a black man could legally walk from the north part of the state all the way to the state capital, Jackson, was soon left by the wayside, as the march instead became an opportunity to get people registered to vote.  And Stokely Carmichael used it as a chance to introduce the term 'black power'.

Whatever Carmichael's intent, the term 'black power' did not go over so well with the media and many whites.  Unfortunately for Carmichael, the term seemed to conjure visions of riots and blacks wresting power from whites, which scared a lot of people.  King and others did their best to soften Carmichael's rhetoric, but the damage had already been done and a lot of the good will that the march had generated fizzled away.  This book provides not only a look at a specific series of events, including the sometimes violent response, but it also looks at the changes that the Civil Rights Movement was experiencing along the way.  I learned a lot from this book.  The book shows that history is rarely smooth sailing, but full of bumps and storms with a few calm patches mixed in.  I appreciate Bausum's efforts to share this important event with young readers, the opportunities presented here for discussion and teaching are numerous.