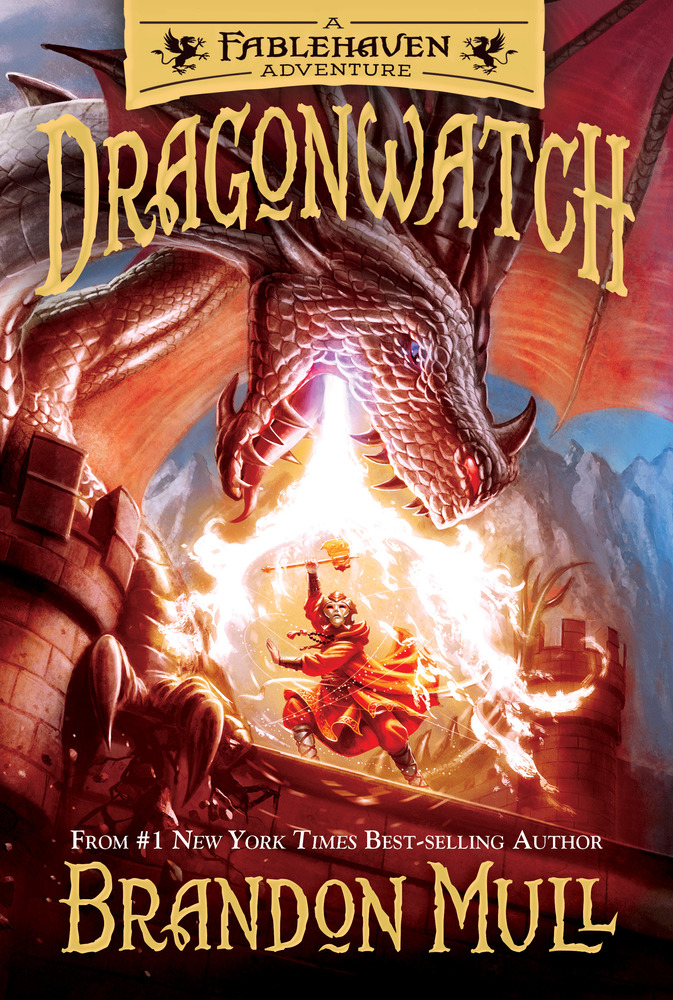 In the long-awaited sequel to Fablehaven, the dragons who have been kept at the dragon sanctuaries no longer consider them safe havens but prisons, and they want their freedom. The dragons are no longer our allies...

In the hidden dragon sanctuary of Wyrmroost, Celebrant the Just, king of the dragons, plots his revenge. He has long seen the sanctuaries as prisons, and he wants nothing more than to overthrow his captors and return the world to the Age of Dragons, when he and his kind ruled and reigned without borders. The time has come to break free and reclaim his power.

No one person is capable of stopping Celebrant and his dragon horde. It will take the gathering of the ancient order of Dragonwatch if there is any chance of saving the world from destruction. In ancient times, Dragonwatch was a group of wizards, enchantresses, dragon slayers, and others who confined the dragons into sanctuaries. But nearly all of the original Dragonwatch members are gone, and so the wizard Agad reaches out to Grandpa Sorenson for help.

As Kendra and Seth confront this new danger, they must draw upon all their skills, talents, and knowledge, as only they have the ability to function together as a powerful dragon tamer. Together they must battle against forces with supernatural powers and breathtaking magical abilities.
How will the epic dragon showdown end? Will dragons overthrow humans and change the world as we know it?

I have been eagerly awaiting this book since I first heard about it.  The original Fablehaven series is among my favorite books of all time, so I was thrilled to get my hands on this sequel series.  And I was not at all disappointed.  Kendra and Seth are the same great, if sometimes annoying (Seth) characters as they were previously.  But now they face a new set of challenges.  After defeating the demons in the Fablehaven series, Kendra and Seth now join the battle to stop the dragons from escaping their refuges.  Together they have the power to resist dragon fear, this unfortunately makes them the best candidates to take over as the caretakers of Wyrmroost.  But despite their experiences and the growth they've undergone, their still young and inexperienced, and they have to face off with the king of the dragons.  With the help of Grandpa and Grandma Sorensen, Mendigo (repaired), as well as some new friends, Seth and Kendra have to stop the dragons from escaping into the world which they long to dominate.  I really enjoyed reading this book as it's full of excitement, fabulous world-building, and interesting characters.  Seth is still his impulsive, adventurous self and Kendra is still the law-abiding, helping person she has always been.  The only thing that made me sad reading this is that I will have to wait a year to read the next book.

DECKED OUT FOR DRAGONWATCH CONTEST


Pay tribute to your favorite dragons! Send us a photo on social media and Brandon Mull may pick YOU as the fan most “Decked Out for Dragonwatch”!
If you love dragons, gather together your best dragon gear and unleash your imagination by creating a space in your home, classroom, library, or local bookstore that pays tribute to all your favorite dragons from Fablehaven and anywhere else in the universe.
Take a picture of your “Decked Out for Dragonwatch” space and send it to us via social media. Brandon Mull will choose the best, most creative spaces from submitted entries, and we’ll send those lucky fans and autographed copy of Dragonwatch plus a copy of The Caretaker’s Guide to Fablehaven and Fablehaven Book of Imagination.
See the website for the five ways to enter and the official rules: http://brandonmull.com/decked/
https://www.instagram.com/deckedoutfordragonwatch/