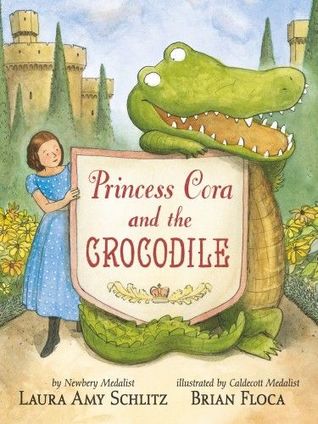 PRINCESS CORA AND THE CROCODILE
by Laura Amy Schlitz, illustrated by Brian Floca
Candlewick Press, 2017
ISBN: 978-0-7636-4822-0
Ages 6-9
Source: publisher for review
All opinions expressed are solely my own.

A Newbery Medalist and a Caldecott Medalist join forces to give an overscheduled princess a day off and a wicked crocodile a day "on."

Princess Cora is sick of boring lessons. She's sick of running in circles around the dungeon gym. She's sick, sick, sick of taking three baths a day. And her parents won't let her have a dog. But when she writes to her fairy godmother for help, she doesn't expect help to come in the form of a crocodile, a crocodile who does not behave properly.

What do you get when you combine a Newbery Medalist and a Caldecott Medalist?  You get a book that is an absolute delight from beginning to end.  That cover alone is bound to make the book fly off the shelf.  And the story and illustrations inside do not disappoint.  When Princess Cora is born, her parents are overwhelmed by the responsibility of teaching her how to rule a kingdom, so they go completely overboard.  Princess Cora spends her days either bathing (3 times a day is barely enough according to her nanny), learning about ruling a kingdom with the Queen (from the most boring books ever written), or exercising in the basement with the King.  Every time she tries to object, she's told that's she being inappropriate or given the 'disappointed face'.  Finally, in desperation, Cora writes to her fairy godmother asking for a pet dog.  The next morning, a pet has arrived, but it's not at all what Princess Cora expected: it's a crocodile.

At first Princess Cora is disappointed, at least until the crocodile dawns one of her dresses and claims that he can take her place.  Cora is so desperate that she agrees as long as the crocodile promises not to bite anyone, and makes the crocodile a wig from her nanny's mop.  The ridiculous nature of a crocodile taking the place of a young girl is what makes this so funny, especially since the nanny, Queen, and King don't notice at first they are so lost in their routines.  Naturally, when the switch is noticed things go dreadfully (and hilariously) wrong.  Meanwhile, Cora is having a delightful time climbing trees, wading in streams, and stepping in cow manure (yuck).  But when she returns to the castle she finds things in a tizzy and has to find a way to put things back together without things going back to the way they were.  The illustrations are delightful.  That crocodile in a much too small dress is classic.  This is delightful ode to the fairy tale genre while still addressing a common modern day problem of being too busy.  One of my favorites of the year so far.  I'll be cheering for this one come award season. 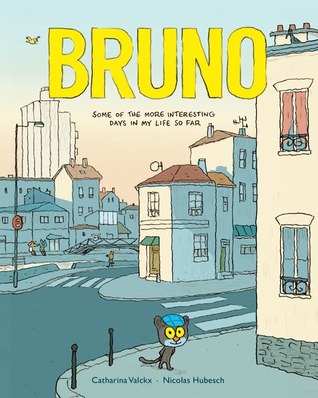 BRUNO
Some of the More Interesting Days in My Life So Far
story by Catharina Valckx, illustrations by Nicolas Hubesch, translated by Antony Shugar
Gecko Press, 2017
ISBN: 978-1-77657-124-6
Ages 6-9
Source: Myrick Marketing for publisher for review
All opinions expressed are solely my own.

Bruno, the cat in the checkered cap, takes life as it comes. When it's too rainy to go outside, he rustles up an inside picnic with his friends. When he meets a fish swimming in the air, he follows it. Why not! When the canary forgets how to sing and can only speak gibberish, Bruno helps out.

To be honest, I didn't enjoy this book as much as I would have liked.  Bruno is a fun character with his blue cap and nice house.  He has friends and some simple adventures.  The first story about a peculiar day in which he meets a flying fish and his horse friend, Ringo walks backward every where was especially silly.  But the story about the stupid day and some other episodes of name-calling didn't strike me as particularly good examples of how to talk about your friends.  Admittedly, Bruno's friends don't always play nice and are rather selfish at moments, but still, the name-calling rubbed me the wrong way.  Other than that though the book was cute.  I really liked the illustrations, especially of Bruno's home, it looked nice and cozy (at least until the dreadful Gerard came to visit).  And I appreciated Bruno's kindness to the rather confused canary whose statements don't make any sense whatsoever. It may also be that with this book being originally published in French, it doesn't click with my American tastes.  Give this one to young readers who are ready for something a bit different than they are used to. 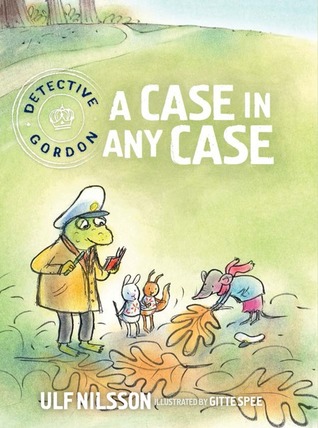 The third and final book in the much-loved Detective Gordon series by one of Sweden's top children's writers.

I am sad to say that this is the last book in the Detective Gordon series.  I've quite enjoyed this series.  Both Detective Gordon and his Police Chief Assistant Buffy are endearing characters who work hard to serve the animals in the forest, even when they are scared.  Currently, Gordon is on vacation, which may or may not be permanent, but he is discovering that he misses his old job, so he starts visiting the police station at night to see what's going on.  Buffy however only sees dark shadows and hears scrabbling noise which badly frightens her.  So she seeks her old friend's assistance in solving the case.  When he goes with her to the station, just as he's about to tell her that he's the nighttime visitor, they get interrupted by two young animals going missing from the local kindergarten class.  Working together once again, the two police officers finally realize what they've been missing.  Adorable illustrations, along with short chapters, and interesting, but not really scary mysteries make this series perfect for 2nd and 3rd graders that aren't quite ready for more intensive mysteries.  A delightful series from beginning to end, one I'm sad to see end. 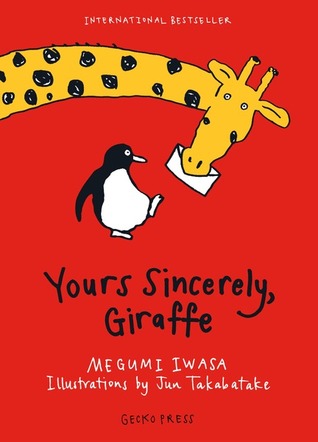 Giraffe is bored, as usual. He'd love a friend to share things with. So he writes a letter and sends it as far as possible across the other side of the horizon. There he finds a pen pal, Penguin.

I wasn't really into this book until Giraffe started trying to understand what Penguin looked like based on the descriptions in his letters.  Black and white, no neck or all neck, feathers, small wings, and a beak are the descriptors that Giraffe and Pelican use to build Giraffe a penguin costume.  I had to laugh out loud when I saw the end result.  This book is definitely different in tone and style than I am used to, but it's sweet and amusing, even laugh-out-loud funny at some points.  The whole story begins when Giraffe, who is bored, decides to write a letter for Pelican (who starts a delivery service because he is bored) to deliver over the horizon.  Pelican finds Seal who delivers the letter to Penguin, who gets all the mail in the Whale Sea.  While the concept of sending and receiving mail might be a little more old-fashioned than a lot of kids are used to, this is a great way to introduce them to the delights of receiving mail, and one way to overcome boredom.  Delightful, easy read that is sure to make most children (and adults) smile.