MMGM: Jasper and the Riddle of Riley's Mine by Caroline Starr Rose 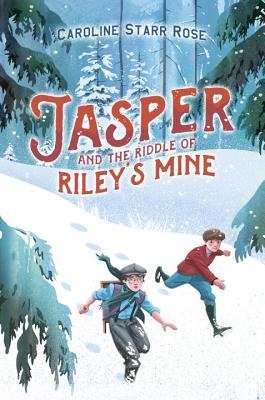 Hoping to strike it rich, two brothers escape an abusive father and set out on a treacherous journey to Alaska during the Klondike Gold Rush.

Desperate to get away from their drunkard of a father, eleven-year-old Jasper and his older brother Melvin often talk of running away, of heading north to Alaska to chase riches beyond their wildest dreams. The Klondike Gold Rush is calling, and Melvin has finally decided the time to go is now--even if that means leaving Jasper behind. But Jasper has other plans, and follows his brother aboard a steamer as a stowaway.

Onboard the ship, Jasper overhears a rumor about One-Eyed Riley, an old coot who's long since gone, but is said to have left clues to the location of his stake, which still has plenty of gold left. The first person to unravel the clues and find the mine can stake the claim and become filthy rich. Jasper is quick to catch gold fever and knows he and Melvin can find the mine--all they have to do is survive the rough Alaskan terrain, along with the steep competition from the unscrupulous and dangerous people they encounter along the way.

Caroline Starr Rose has created an enjoyable historical fiction novel.  Jasper, the main character, makes for a great sympathetic narrator who I couldn't help but root for as he strives to find his brother and a new life for himself.  Starr does a great job creating the place and time and even an interesting mystery.  I also appreciated that the ending isn't an 'happily ever after' one, but much more realistic as the boys follow their dreams but have to face the realities of life in the Klondike.  This story represents what historical fiction should be, an interesting story based on historical events, strong characters, with interesting twists and turns.  I loved how determined Jasper and Melvin are to find a new life for themselves, even though things go so very wrong for them, over and over.  Stowing away, theft, and creepy guys in coats made of bear all move this story along in fabulous ways.  I also liked the fact that Jasper uses his mother's old washing board to make his way, proving there are things more valuable than gold, like being clean. ;)