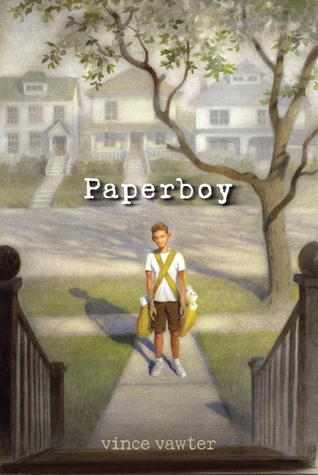 An 11-year-old boy living in Memphis in 1959 throws the meanest fastball in town, but talking is a whole different ball game. He can barely say a word without stuttering, not even his own name. So when he takes over his best friend's paper route for the month of July, he knows he'll be forced to communicate with the different customers, including a housewife who drinks too much and a retired merchant marine who seems to know just about everything.

The paper route poses challenges, but it's a run-in with the neighborhood junkman, a bully and thief, that stirs up real trouble--and puts the boy's life, as well as that of his family's devoted housekeeper, in danger. 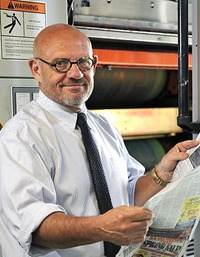 Vince Vawter, a native of Memphis, retired after a 40-year career in newspapers, most recently as the president and publisher of the Evansville (Ind.) Courier & Press. In 2002-2003 he was president of the board of directors of the Hoosier State Press Association. He previously served as managing editor of The Knoxville (Tenn.) News Sentinel and news editor of the now-defunct Memphis Press-Scimitar. He lives with his wife in Louisville, Tenn., on a small farm in the foothills of the Great Smoky Mountains.

It took me a few chapters to get into this book, but once I did, I zipped through it, wanting to know what would happen to our stuttering hero.  The lack of quotation marks through me off a little bit, but once I got used to it I was okay with it.  However, I'm not sure younger readers will be able to adjust as easily.  This book I think is more appropriate for older middle grade readers, 5th grade and up would be my recommendation.  Of course since a lot of younger readers don't really like historical fiction also makes a difference.  It's really too bad because there is so much great historical fiction available.

I loved the fact that the hero had a disability that isn't often talked about in children's literature.  The only other book I can recall reading recently that included stuttering is The Boy and a Jaguar by Alan Rabinowitz about his own struggles with stuttering.

The relationships in the book were one of the things that I found most fascinating, especially between the main character (whose name we don't learn until the end because he has a hard time pronouncing his own name) and Mam, his family's black maid.  It was interesting to watch as the boy's eyes slowly open in regard to the way blacks are treated in 1959 Memphis and his dislike of it.  He loves Mam and doesn't appreciate the way she's treated.  And yet it isn't the main part of the story.  The story revolves around the boy's taking over his friend's paper route for a month.  The paper route doesn't worry him, it's the having to talk to people to collect the fees that worries him.  What makes the story especially interesting is his interactions with the people he runs into.

The boy's interactions with an alcoholic lady who he finds beautiful, but sad, Mr. Spiro whose house is full of books, and especially his interactions with Ara T. the local junkman all stretch the boy's abilities to communicate.  I enjoyed watching him grow up and develop his courage.

There are a few things though that I think make it more appropriate for older middle grade.  A few examples of bad language and the interactions with the alcoholic lady top that list, but the boy also finds out that his father isn't his biological father and wrestles with that somewhat.  There isn't anything really bad but the book works better for more mature young readers.
middle grade historical fiction Newbery Honor Winner