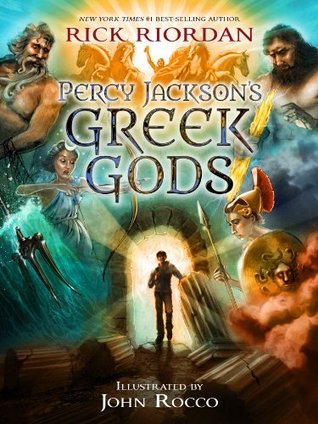 PERCY'S JACKSON GREEK GODS
by Rick Riordan, illustrated by John Rocco
Disney Hyperion Books, 2014
ISBN: 978-142318364-8
YA Mythology
Grades 8 and up
Source: purchased
All opinions expressed are solely my own.

'A publisher in New York asked me to write down what I know about the Greek gods, and I was like, Can we do this anonymously? Because I don't need the Olympians mad at me again. But if it helps you to know your Greek gods, and survive an encounter with them if they ever show up in your face, then I guess writing all this down will be my good deed for the week.' So begins Percy Jackson's Greek Gods, in which the son of Poseidon adds his own magic--and sarcastic asides--to the classics. He explains how the world was created, then gives readers his personal take on a who's who of ancients, from Apollo to Zeus. Percy does not hold back. 'If you like horror shows, blood baths, lying, stealing, backstabbing, and cannibalism, then read on, because it definitely was a Golden Age for all that.' Dramatic full-color illustrations throughout by Caldecott Honoree John Rocco make this volume--a must for home, library, and classroom shelves--as stunning as it is entertaining.

Rick Riordan is the #1 New York Times bestselling author of the Percy Jackson and the Olympians series, the Kane Chronicles, and the Heroes of Olympus. He is also the author of the multi-award-winning Tres Navarre mystery series for adults.

For fifteen years, Rick taught English and history at public and private middle schools in the San Francisco Bay Area and in Texas. In 2002, Saint Mary’s Hall honored him with the school’s first Master Teacher Award.

While teaching full time, Riordan began writing mystery novels for grownups. His Tres Navarre series went on to win the top three national awards in the mystery genre – the Edgar, the Anthony and the Shamus. Riordan turned to children's fiction when he started The Lightning Thief as a bedtime story for his oldest son.

Today over thirty-five million copies of his Percy Jackson, Kane Chronicles, and Heroes of Olympus books are in print in the United States, and rights have been sold into more than 35 countries. Rick is also the author of The 39 Clues: The Maze of Bones, another #1 New York Times bestseller.

Rick Riordan now writes full-time. He lives in Boston with his wife and two sons.

First off I have to say the book is beautifully put together.  The stories are wonderfully told with Percy's voice coming through loud and clear.  The large size of the book makes it a great choice as a gift for those who are really into Greek mythology.  Rocco's illustrations are stunning and match the stories very well.

The problems I have with the book have nothing to do with the writing or the illustrations or the design of the book.  It's been so long since I've read the original Greek myths that I'd forgotten what they were like. These stories are not, in my opinion, appropriate for younger children.  The book looks at the twelve main Greek gods: Hestia, Demeter, Persephone, Hera, Hades, Poeidon, Zeus, Athena, Aphrodite, Ares, Hephaestus, Apollo, Artemis, Hermes, and Dionysus.  None of these characters are worth admiring, their stories are stories of greed, unfaithfulness, revenge, inappropriate relationships (I mean marrying your sister?!) and other such nastiness. While told in a very entertaining way and "Percy" is careful about referring to certain things like the numerous children born to Zeus and his many 'girlfriends,' the content of the stories makes the book more appropriate for older readers.

I appreciated that Percy expresses his distaste for the 'wild' behavior that the gods and goddesses often exhibit and the 'grossness' of some of it.  I also never realized that some of these stories just don't make much sense, but I guess these kind of stories aren't meant to make sense, they are about 'gods' that are really nothing more than humans with supernatural powers.
middle grade fantasy mythology