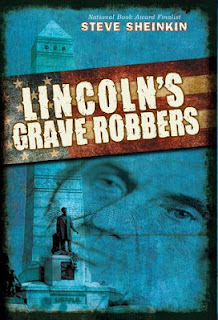 A true crime thriller -- the first book for teens to tell the nearly unknown tale of the brazen attempt to steal Abraham Lincoln's body!

The action begins in October of 1875, as Secret Service agents raid the Fulton, Illinois, workshop of master counterfeiter Ben Boyd. Soon after Boyd is hauled off to prison, members of his counterfeiting ring gather in the back room of a smoky Chicago saloon to discuss how to spring their ringleader. Their plan: grab Lincoln's body from its Springfield tomb, stash it in the sand dunes near Lake Michigan, and demand, as a ransom, the release of Ben Boyd --and $200,000 in cash. From here, the action alternates between the conspirators, the Secret Service agents on their trail, and the undercover agent moving back and forth between the two groups. Along the way readers get glimpses into the inner workings of counterfeiting, grave robbing, detective work, and the early days of the Secret Service. The plot moves toward a wild climax as robbers and lawmen converge at Lincoln's tomb on election night: November 7, 1876.

Sheinkin does it again. He creates a vivid picture of a time and place while telling a story that most people have probably never heard before. I know this isn't something I had ever heard about before and I've read a lot about Abraham Lincoln.  What isn't to love here, I mean, there are counterfeiters, jail breaks, and undercover agents.  What kid wouldn't want to hear about that? The icing on the cake is that the story is true. The sad part is how Lincoln's body was treated after the attempted robberies. Hiding the casket behind a bunch of lumber in a back room?! I had to admire the caretaker's efforts to protect the body when so few were willing to help him. With plenty of excitement and enough twists and turns to satisfy most readers, Sheinkin once again presents readers with a great read. Highly recommended.

CHECK OUT OTHER GREAT NONFICTION RECOMMENDATIONS
AT PRACTICALLY PARADISE.