BLOG TOUR: Swept Up by the Sea by Tracy & Laura Hickman 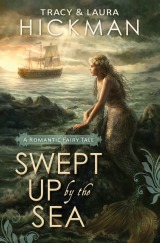 SWEPT UP BY THE SEA
A Romantic Fairy Tale
by Tracy & Laura Hickman
Shadow Mountain, 2013
YA Fantasy
Grades 7 and up
ARC provided by publisher in return for honest review.
All opinions expressed are solely my own.

Determined to seek his fortune, Percival Taylor leaves behind his sleepy hometown and sets out to become a legendary pirate only no one at the roguish seaport of Blackshore will allow him anywhere near a ship! Percival must find other means to win the heart of the beautiful Tuppence Magrathia-Paddock, who has mistaken him for a pirate rogue out of one of her romantic tales. She is entirely willing to swoon into his arms if he can prove his buccaneer soul and she is willing to arrange her own kidnapping to prove it. Percival eventually finds himself captain of a broken-down ship, complete with a crew of pirates. 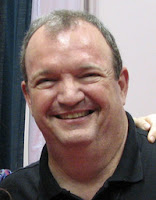 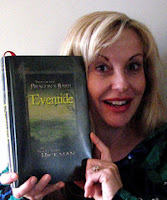 NYT Best-selling fantasy authors Tracy Hickman, with his wife Laura, began their journey across the 'Sea of Possibilities' as the creators of 'Dragonlance' and their voyage continues into new areas with the 'Drakis' trilogy, 'Wayne of Gotham', a Batman novel for DC Comics and his 'Dragon's Bard' collector's series . Tracy has over fifty books currently in print in most languages around the world. A record of both Tracy and Laura's DNA currently orbits on the international space station and he is the writer and editor of the first science-fiction movie actually filmed in space. Follow them on Facebook or, of course,  on Goodreads!

Swept Up by the Sea is a humorous, light romance revolving around the adventures of one Percival Taylor and Tuppence Magrathia-Paddock.  Percival arrives in Blackshore determined to become a pirate and have gentlemanly adventures. However, despite his best efforts every pirate ship in port rejects him, yet he persists in sneaking on board. In his efforts to defend himself from the pirates he inadvertently rescues Tuppence.  Tuppence is convinced that Percival is a 'rogue' and fantasizes about him.  When Tuppence is kidnapped Percival sets out to rescue her in his own rather bumbling way.  If you are looking for a serious romance with a great deal of depth this is probably not for you. But if like me you enjoy a light humorous fantasy where the hero/heroine are likeable but inept than I can heartily recommend this one.
Deseret Book Blog Tour YA Fantasy