NONFICTION MONDAY: The Giant and How He Humbugged America by Jim Murphy 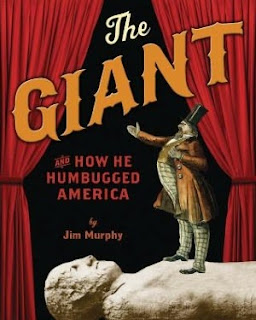 THE GIANT AND HOW HE HUMBUGGED AMERICA
by Jim Murphy
Scholastic Press, 2012
ISBN: 978-0-439-69184-0
MG/YA Nonfiction
Grades 5 and up
Reviewed from copy borrowed from school library.
All opinions expressed are solely my own.

Two-time Newbery Honor Book author has written an amazing account of one of America's most famous hoaxes!

When a 10-foot tall purported "petrified man" is unearthed from a backyard in upstate New York in 1869, the discovery immediately turns into a spectacle of epic proportions. News of the giant spreads like wildfire, and well over a thousand people come to view him in the first five days alone!

Everyone has their own idea of his true origin: Is he an ancient member of the local Onandaga Indian tribe? Is he a biblical giant like Goliath? Soon the interests of world-renowned scientists and people from around the globe are piqued as arguments flare over who he is, where he came from, and if he is real--or just a hoax.

In a riveting account of how the Cardiff Giant mystery snowballed into one of America’s biggest money-making spectacles--and scams--Jim Murphy masterfully explores the power of 19th-century media and the unexpected ripple effect that a single corrupt mastermind can produce when given a stage.

Jim Murphy just has a way of writing a very readable book. He's careful to include background information and brief explanations of topics he refers to without disrupting the flow of the story.  This particular story is both fascinating and mind-boggling.  Not only did the men behind the hoax fool much of the public but they also fooled dozens of acclaimed scientists as well. Of course a good number of those scientists were not archaeologists or experts in the field at all. Those experts that did examine the giant and the ground he was found in expressed doubts as to the giant's authenticity. The story then gets crazier as P.T. Barnum gets involved and instigates the creation of a fake of the fake.  However, like many 'crazes' this one died down too as more and more pieces of the hoax came to light and people became disillusioned. Of course, it would be nice to say that such things don't happen today, but of course they do, people can and often are still fooled all the time.  Murphy explains a few other hoaxes that have occurred over the years at the end of the book.  A well-told story and interesting look at the power of belief as well as the power of the media to influence what people see. I appreciated the time Murphy takes at the end to explain his research process and how he decided to write about this topic, great for using in the classroom. Recommended.