BLOG TOUR: Lair of the Serpent by T. Lynn Adams 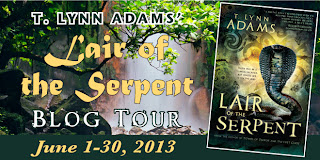 LAIR OF THE SERPENT
Tombs of Terrors #3
by T. Lynn Adams
Sweetwater Books, 2013
ISBN: 978-1-59955-956-8
YA/Adult Thriller
Grades 9 and up
Review copy provided by publisher in return for honest review.
All opinions expressed are solely my own.

The shock of the assault caught the men off guard, and they struggled to control the American.
They wrestled him to the ground, pinning him there, holding him fast, as Sang stood up from the ground.

Cursing in Khmer, Sang pointed the gun at Jonathon’s head and, without hesitating, pulled the trigger.

Jonathon can’t wait to surprise Delia for her birthday. With a little help from Delia’s brother, Severino, he plans to visit her in Cambodia where she’s working as a humanitarian volunteer.

But Jonathon arrives only to find a panicked Severino—and no Delia.

Jonathon and Severino are determined to find Delia before it’s too late—but it might not be that easy. Now, with the orphan Chey and their friend Juan, Jonathon and Severino must fight their way through human trafficking rings, a dense jungle, and a radical group bent on using Delia as a human sacrifice in order to find the Nāga Mani, a sacred and powerful stone.

Lair of the Serpent seamlessly blends intense action and suspense with family loyalty and tender romance. The rich setting and colorful characters will ignite your imagination, while the twisting plot and elements of fantasy will satisfy every adventurer’s thirst for exotic quests.

Writing has been part of the author’s career since she was fifteen years old. In addition to newspapers, she has written for many national and international publications. Currently she is the editor of a regional agriculture newspaper and relishes the opportunity to perform that work from her home. She and her husband are raising six children, and she is quick to tell you that means five to seven loads of laundry every day. It also means loads of laughter, which they enjoy doing more than anything else.

Besides being with her family, the author loves studying the scriptures, learning history, reading, and drawing. She served a mission to Peru and deeply treasures that experience. On a personal note, she will admit she is terrified of spiders, can’t fry an egg, and once burned a bag of potato chips. (She hid the bag in the oven to keep it from being devoured by her teenage sons and forgot it was there. Since then she has discovered the best hiding place in the entire house is the dishwasher. No teenager wants to get near one!)

There are two things that have influenced the author more than anything else. One is her family and the other is the gospel. She couldn’t imagine living without either one and is profoundly grateful to the Lord that His plan means she doesn’t have to choose. He has provided a way for us to enjoy both for an eternity. She only hopes she doesn’t have to do much laundry in Heaven.

Great characters with depth, check. Fascinating setting full of cultural and physical details, check. Thrilling adventure, check. This book has pretty much everything that a great book needs.  The characters are sympathetic and easy to relate to with strengths and weaknesses. Jonathan and Severino are both teenagers but they have experienced some pretty awful things (rattlesnake bites, being held hostage, threatened with death, etc). But nothing has prepared them for the disappearance of Delia, Severino's sister, while on a humanitarian mission to Cambodia. But neither boy will leave the country without her and the police aren't a lot of help.  I think one of the things that I love the most about Adams' books is the incredible detail in the setting. I could almost see, smell, and hear the place as I read.  This she manages to do while moving the story along at a rapid pace. This series of books really would make a great series of movies (which are in the works, I believe). Jonathan, Severino, and Delia are exposed to both the best and the worst that humanity has to offer and it makes for one incredible story. I highly recommend it (I would start with the first book in the series though, Tombs of Terror where Jonathan, Severino, and Delia meet for the first time).