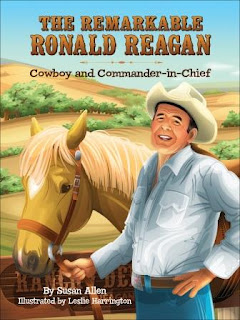 Ronald Reagan was a natural leader, well-remembered not just for his political leadership, but also for his warmth, kindness, dignity, and optimism. There’s a lot kids can learn from Reagan, about our country and about being good leaders and good people. The Remarkable Ronald Reagan: Cowboy and Commander in Chief is a fun, colorful look at his life, from his humble beginnings as the son of a shoe salesman, to his years as a Hollywood actor, his service in WWII, his life as a rancher, and finally the culmination of his political career in the Oval Office. There’s plenty that even adults can learn as they read along with their kids, including Reagan’s efforts to stand up against racial discrimination, and his powerful faith in God. The Remarkable Ronald Reaganis a treat for the entire family.

Susan Allan served as First Lady of Virginia when her husband, George Allen was elected as the Commonwealth's 67th governor.  In that role, she worked on many initiatives including tourism, breast cancer awareness, and children's issues.

Accompanying her father-in-law, famed NFL head coach and Chairman of The President's Council on Physical Fitness, Susan met Ronald Regan in 1987 in the Oval Office.  Regan was an Allen family friend and the one who inspired her husband to run for office.  George led Young Virginians for Reagan in 1976 and currently serves on the Board for Governors for the Reagan Ranch.

Susan Allen resides in Mt. Vernon, VA with her husband and is an avid fan of reading, history, and the outdoors.  The Allens have two daughters, Tyler and Brooke, and one son, Forrest.

"Government's first duty is to protect the people, not run their lives."

"A people free to choose will always choose peace."

"Freedom is never more than one generation away from extinction."

"You and I have a rendezvous with destiny.  We will preserve for our children this, the last best hope of man on earth, or we will sentence them to take the first step into a thousand years of darkness.  If we fail, at least let our children and our children's children say of us we justified our brief moment here.  We did all that could be done."

"Whatever else history may say about me when I'm gone, I hope it will record that I appealed to your best hopes, not your worst fears..."

"The nine most dangerous words in the English language are: I'm from the government and I'm here to help."

A beautifully told picture book biography of Ronald Reagan, the 40th President of the United States.  The illustrations wonderfully complement the well-written text.  I liked the information the author decided to include, a difficult task for a picture book biography. The author takes the reader through Reagan's early years through his death, sharing fun details such as how he spent seven summers working as a life guard to save money for college, saving 77 people from drowning.  The book is perfect for sharing with a timeline, quotes, and letter excerpts included at the end.  The only thing that would have made it better would be a list of works cited and further resources. Well-done.