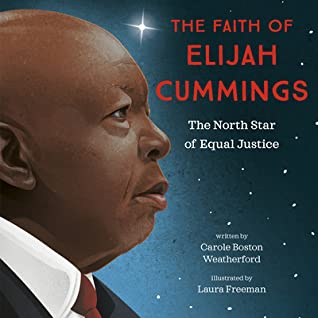 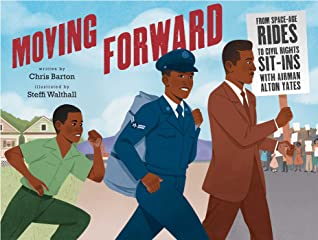 MOVING FORWARD:
From Space-Age Rides to Civil Rights Sit-Ins with Airman Alton Yates
written by Chris Barton, illustrated by Steffi Walthall
Beach Lane Books, 2022
Source: Publisher for review (Thanks!)
Ages 4-8
All opinions expressed are solely my own.
Book description and book cover image are copyrighted by the publisher & illustrator and obtained through Goodreads.com.
ABOUT THE BOOK
Meet activist Alton Yates, an Air Force veteran who dedicated his life to propelling America forward—from space travel to the Civil Rights Movement and beyond—in this inspiring nonfiction picture book.
As a child growing up in Jacksonville, Florida, Alton Yates watched Black veterans return home from fighting for their country, only to have that country turn its back on them. After Alton joined the Air Force and risked his life to make spacecraft and airplane flight safer, he returned home to the same Jim Crow laws.
Alton now had a new mission: To make a stand against Jim Crow.
Based on author Chris Barton’s extensive interviews, witness Alton Yates’s lifelong commitment to his country, as he put his life on the line time and again for science, for civil rights, and for America’s progress.
REVIEW
Picture book biographies that introduce young readers to people from the past can open doors to understanding events from the past.  Chris Barton does a remarkable job introducing young readers to a civil rights activist with a rather unusual history who like so many such activists paid a heavy price for his courage.  Before becoming an activist though, Alton Yates served in the Air Force where he volunteered himself for experiments regarding human safety in airplanes, spacecraft, and automobiles.  He was subjected to incredible pressures on the ground, in the air, and under water.  Alton returned home after four years to help care for his younger siblings when his father got sick.  The prejudice and poor treatment he faced on the way home inspired him to get involved in trying to change things in his hometown of Jacksonville, Florida.  After joining the NAACP Youth Council, he began participating in protests  regarding segregated lunch counters in department stores and elsewhere.  He was on the front lines during what came to be known as Ax Handle Saturday where protesters were attacked by white men carrying wooden ax handles.  Alton like others that day was injured. But he didn't quit and even now supports the fight for "what's just and what's fair".  This inspiring story of courage and self-sacrifice is thoroughly documented in the backmatter that includes a time line, author and illustrator notes as well as a selected sources section.  Walthall's lovely illustrations help drive home this powerful story.  A wonderfully well-done book all around, I highly recommend it.
Civil Rights Picture Book Biographies