COMEDY OR SPORTS? Can an imaginary friend help Hudi follow his dreams? Find out in CHUNKY by Yehudi Mercado 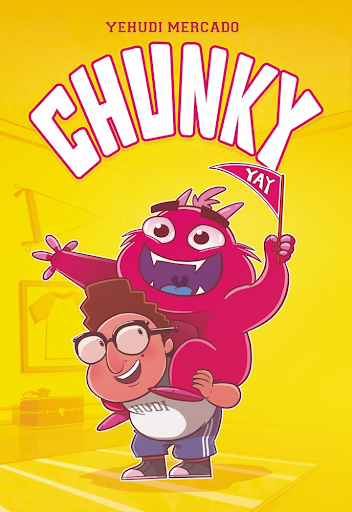 CHUNKY
by Yehudi Mercado
Katherine Tegan Books, 2021
ISBN: 978-0-06-297278-1
Source: purchased
Ages 9-12
Graphic Novel--speculative
All opinions expressed are solely my own.
Book cover obtained from goodreads.com.
ABOUT THE BOOK
Yehudi Mercado draws inspiration from his childhood struggle with his weight while finding friendship with his imaginary mascot, Chunky, as he navigates growing up in a working-class Mexican Jewish family.
Hudi needs to lose weight, according to his doctors. Concerned about the serious medical issue Hudi had when he was younger, his parents push him to try out for sports. Hudi would rather do anything else, but then he meets Chunky, his imaginary friend and mascot. Together, they decide to give baseball a shot.
Hudi has found the cheerleader he never had, as Chunky cheers him on even when Hudi barely makes the team. Baseball doesn’t go well (unless getting hit by the ball counts), but the two friends have a great time drawing and making jokes. While Hudi’s parents keep trying to find the right sport for him, Chunky encourages him to pursue his true love—comedy.
But when Hudi’s dad loses his job, it gets harder for Hudi to chart his own course, even with Chunky’s guidance. Can Chunky help Hudi stay true to himself, or will this friendship strike out?
REVIEW
After his doctor expresses concern about Hudi's weight, his athletic father pushes him to get involved in sports.  Despite being more interested in comedy, Hudi does as his parents ask and tries several different sports. Luckily, his imaginary friend, Chunky, makes a great cheerleader.  Hudi tries baseball, but mostly gets hit by the ball.  Next comes soccer, with goals made from a ricochet and a twisted ankle while getting a snack.  Swimming seems like a good fit, until Hudi injures himself trying to make a toy gun to fin in with the guys.  Tennis never takes off for Hudi.  But maybe football?  On top of everything else, Hudi's sister is getting ready for her Bat Mitzvah and his father leaves town for work.  And as Hudi tries desperately to fulfill his father's dreams for him as an athlete, he seems to be leaving his own passion for comedy behind.  A fight with Chunky leaves Hudi on his own as he struggles to find his way.
Hudi and Chunky's relationship is at the heart of this story of finding where you belong.  Chunky's efforts to encourage Hudi are amusing such as decorating sports posters as Hudi makes his way through each sport.  The concern Hudi's parents feel for his health is understandable considering the serious health scare he had previously.  Hudi's difficulty in getting along with his sisters will be easy to relate to for many young readers.  I also found the sports announcer type narration rather funny, especially the 'interview' segments between each sport.  Mercado's art is bright and cheerful and full of kid appeal.  Chunky with his expressive eyebrows and bright pink color and blue tongue is irresistible and funny. Another great title that young graphic novel lovers are bound to enjoy.
2021 books Graphic Novels middle grade fiction graphic novels