MIDDLE GRADE SPECULATIVE FICTION (Animal Fiction): Once Upon a Camel by Kathi Appelt 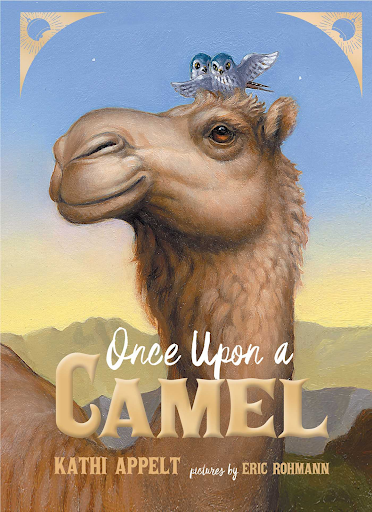 ONCE UPON A CAMEL
by Kathi Appelt, pictures by Eric Rohmann
Atheneum Books for Young Readers, 2021
ISBN: 978-1-5344-9871-6
Source: Blue Slip Media
Ages 9-12
All opinions expressed are solely my own.
ABOUT THE BOOK
An old camel is out to save two baby kestrel chicks during a massive storm in the Texas desert.
Zada is a camel with a treasure trove of stories to tell. She’s won camel races for the royal Pasha of Smyrna, crossed treacherous oceans to new land, led army missions with her best camel friend by her side, and outsmarted a far too pompous mountain lion.
But those stories were from before. Now, Zada wanders the desert as the last camel in Texas. But she’s not alone. Two tiny kestrel chicks are nestled in the fluff of fur between her ears—kee-killy-keeing for their missing parents—and a dust storm the size of a mountain is taking Zada on one more grand adventure. And it could lead to this achy old camel’s most brilliant story yet.
REVIEW
Eric Rohmann's lush paints highlight the gentle old camel and the tender young kestrels that are at the heart of this novel.  Living in western Texas in 1910, Zada, the camel, has lived a long and adventurous life.  When a haboob (sand storm) strikes Zada is left with two kestrel chicks to care for until the storm passes and their parents can return.  To keep the chicks occupied, Zada tells them stories from her life.  Especially stories about her camel friend, Asiye, and their keeper, Teodor, who trained them to race for the Pasha of Turkey.  Zada keeps telling parts of her story as she and the chicks work to survive the storm and then set out to find a mission to hopefully meet up with the chick's parents.  Along the way, Zada keeps getting whiffs of the past.  Appelt has created an engaging story with animal characters that shine brightly.  The way the different elements of the story come together is fantastic as is the way Zada's past and present come together.  Once Upon a Camel presents readers with a tender, sweet story of love and sacrifice and a life well-lived.
2021 books Animals Blue Slip Media middle grade animal fantasy Middle Grade Speculative