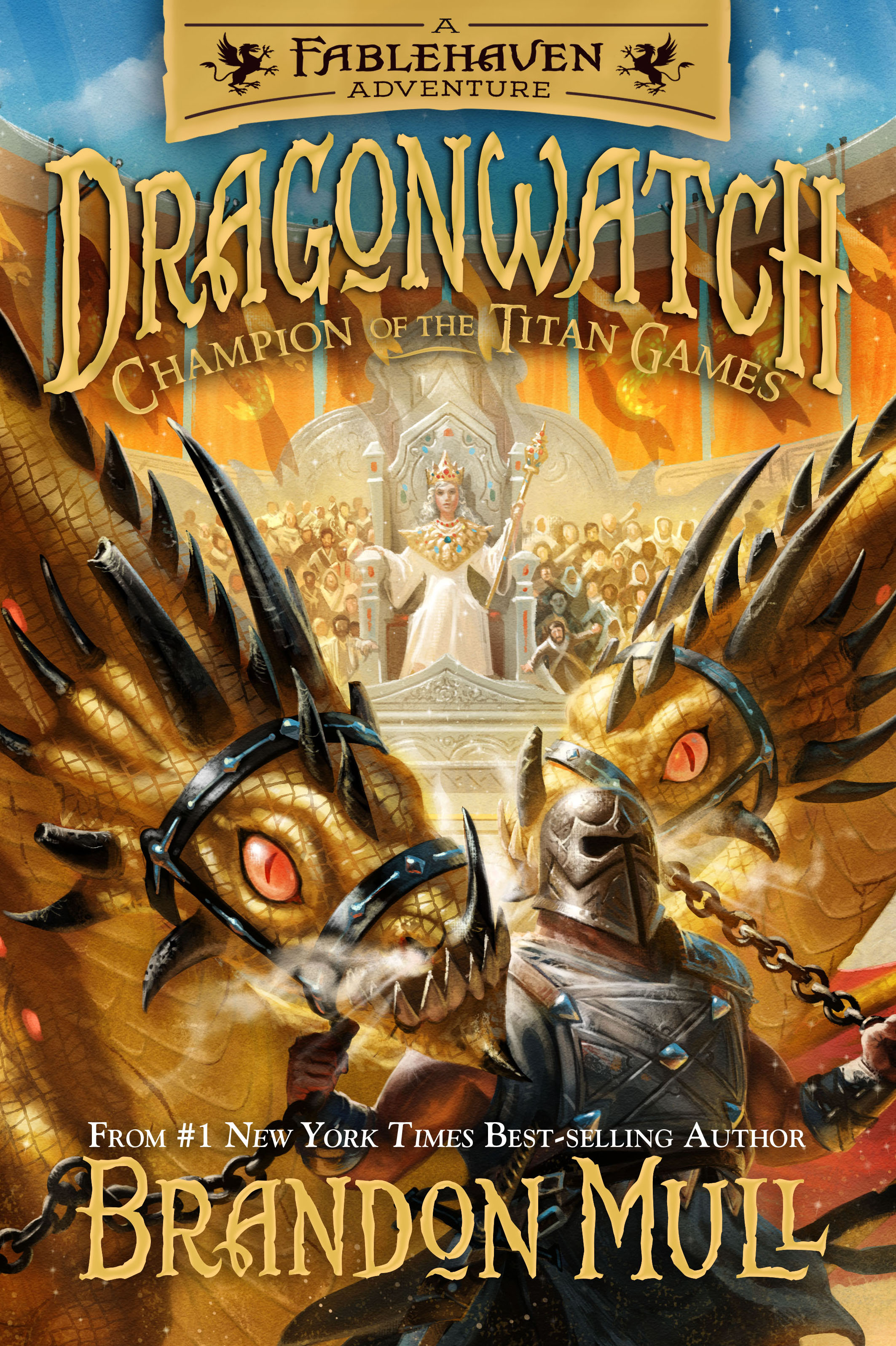 CHAMPION OF THE TITAN GAMES
Dragonwatch #4
by Brandon Mull
Shadow Mountain, 2020
ISBN: 978-1-62972-788-2
Source: publisher for review
Ages 9-12
All opinions expressed are solely my own.
ABOUT THE BOOK
As the war with the dragons intensifies, all eyes are turning to Titan Valley for help. A dragon sanctuary unlike any of the others, this one is home to enslaved dragons ruled by the powerful Giant Queen, one of the five monarchs of the magical world. In addition, it houses the arena for the Titan Games, a series of gladiator-style battles presided over by none other than Humbuggle, the demon who stole Seth’s memories!

Seth is seeking for his memories. Kendra is seeking for Seth. And everyone is seeking to stop the dragons from taking over the world—everyone but Ronodin, the dark unicorn, who has his own devious agenda. In the monstrous battle between giants and dragons, who wins? In the race to retrieve a magical talisman that could help win the war, can Kendra trust Seth? Will they find the answers they desperately need in a realm of trolls and titans? Or are more betrayals imminent?
REVIEW
Wow! What a humdinger of a book.  This fourth book in the Dragonwatch series, which is a follow-up series to Mull's original Fablehaven series, packs quite a punch.  As Mull himself notes at the end of the book, fourth books in a series of five can be tough to write.  The story needs to be moved along just enough to set up the last book, but it needs to stand on it's own as well.  In my opinion, Mull hit it out of the park with this one.  I'm very eager to get my hands on the last book of the series because boy did he set it up well.
Seth and Kendra both end up in Titan Valley, one of the few remaining dragon sanctuaries that hasn't been taken over by the dragons.  Seth is there to check out the Titan Games, a contest that promises the powerful Wizenstone to the winner, hoping to get his memories back.   But he's up against Humbuggle, a clever dwarf turned demon, who exacts a high price from those who lose at his games.  Can Seth find a way to beat Humbuggle and get his memories back or is he doomed to never remember?
Meanwhile, Kendra and her allies arrive at the Giant Queen's fortress to warn her of the developing dragon war and try to help save Titan Valley from being overrun.  But the Queen refuses to take heed and Kendra and her allies are left to try to retrieve the Harp of Ages which might give them a chance against the dragons.  In order to retrieve the Harp though they must approach the Dragon Temple in the midst of the Perennial Storm and face off with three deadly guardians.
Ultimately, Seth's and Kendra's quests come together, but can they trust each other?  And even if they manage to work together, what hope do they really have when the dragons swarm Titan Valley looking for revenge for years of slavery at the hands of the giants?
Full of fascinating twists and turns and action-packed scenes, Champion of the Titan Games does not disappoint.  For those who've enjoyed Brandon Mull's other works, this book is a must read.
2020 books 2020 favorites middle grade fantasy Middle Grade Favorites Middle Grade Speculative