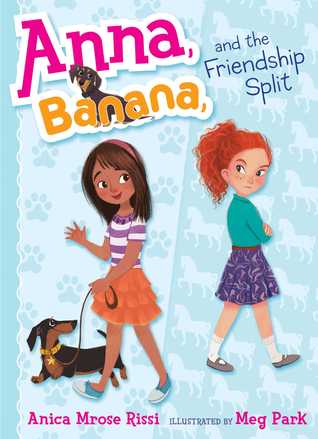 A charming new illustrated chapter-book series about a girl named Anna who navigates the joys and challenges of third-grade best-friendship, with her beloved wiener dog, Banana, by her side.

Anna has two favorite things: her best friend, Sadie, and her dog, Banana. She can't wait to celebrate her birthday with both of them.

But Anna's birthday party turns into a birthday disaster when Sadie starts a terrible fight that Anna never saw coming. Anna doesn't know why her best friend is suddenly acting like her worst enemy, but she knows she'd do anything to fix it. She and Banana just need to come up with a plan.

Only, what if Sadie doesn't want their friendship to be fixed?

Friendship is such a big thing, especially in the lives of children as they are still learning about what friendship is and how it does and doesn't work.  I found this book to be a believable story about Anna and her friend, Sadie, having a fight.  Unfortunately for Anna, the fight occurs on her birthday and results in Sadie walking off with her birthday necklace.  At first Anna is willing to do anything to get Sadie back as her best friend, including giving up the necklace.  But after a few days of the cold shoulder and her brother telling her to stand up for herself, Anna fights back.  But it just may be that her efforts might ruin things for good.  Not only is the story one that young readers (6-9 years-old) can easily relate to, but there is an adorable dog in the mix (Banana).  A fun new series that is bound to win over lots of young fans, especially readers of Ivy and Bean, Judy Moody, or Junie B. Jones. 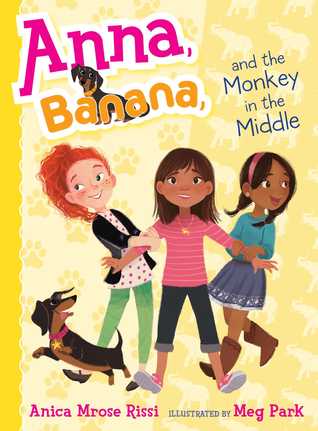 ANNA, BANANA, AND THE MONKEY IN THE MIDDLE
by Anica Mrose Rissi, illustrated by Meg Park
Simon & Schuster Books for Young Readers, 2015
ISBN: 978-1-4814-1608-5
Source: publisher for review
All opinions expressed are solely my own.

The second book in the Anna, Banana illustrated chapter-book series, in which a girl named Anna navigates the joys and challenges of third-grade best friendship, with her wiener dog, Banana, by her side.

Anna is lucky to have two best friends--it makes everything twice as fun. She’s excited to go with both Sadie and Isabel on their class trip to the zoo.

But when Anna’s two best friends start choosing opposite sides on everything, Anna feels caught in the middle. Sadie wants Anna to see the spiny anteater with her, but Isabel wants to visit the tortoise instead. When Isabel pulls Anna toward the camel house, Sadie yanks her toward the giraffes. It’s like they’re playing a game of tug-of-war and Anna is the rope!

How can Anna keep the peace without causing double trouble?

With a little help from her beloved dog, Banana, as well as some unexpected advice from her family, Anna tries to figure out what it means to be a best friend to two very different people...while still being true to herself.

Anna finds herself in a predicament when her two best friends want her full attention all the time.  On a field trip to the zoo Anna must find a way to satisfy both her friends without setting off a storm.  But it's not easy being the 'monkey in the middle'.  Once again, Rissi has written a thoroughly engaging story for early chapter book readers whose concerns with friendship and school take priority in their lives.  Banana, the dog, also makes for a fun companion for Anna in her struggles to do the right thing. 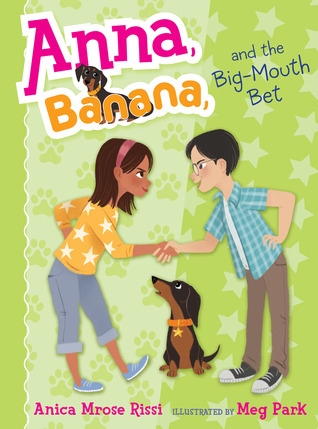 ANNA, BANANA, AND THE BIG-MOUTH BET
by Anica Mrose Rissi, illustrated by Meg Park
Simon & SChuster Books for Young Readers, 2015
ISBN: 978-1-4814-1611-5
Source: publisher for review
All opinions expressed are solely my own.

Anna has a loose tooth! It’s as wiggly as her dog Banana’s tail. But while Anna is poking at her loose tooth, class clown Justin keeps poking fun at Anna and her friends.

Anna tries to make Justin leave them alone, and gets pulled into a high-stakes bet. If Anna wins, Justin has to play nice; but if Anna loses, she has to do something so jaw-droppingly embarrassing, even Banana can’t believe it.

There’s no wiggling her way out of this one. Anna has to win the bet and stop Justin’s annoying antics…before she gets in even more toothy trouble.

Anna is tired of Justin, the boy who sits behind her in class, bothering her and her friends, Sadie and Isabel.  So when she overhears what she believes is Justin making fun of her and her loose tooth, she gets herself into hot water by making a bet over who is going to lose a tooth first.  Anna with her friends' help does her best to get her tooth to come out, but what if Justin wins, what will she do then.  Anna is a fun character and her interactions with her friends and teacher are refreshing.  The concern over embarrassing herself in front of her teacher, protecting her friends, and confronting her own beliefs about the Tooth Fairy all ring true.  A fun new series for young readers who enjoy Judy Moody, Junie B. Jones, or Clementine.
Early Chapter Books Series Thursday