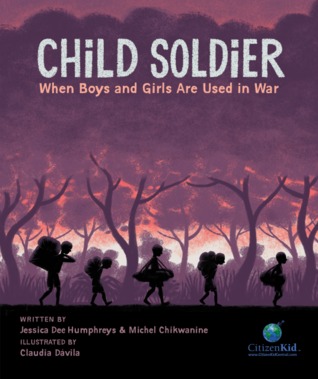 CHILD SOLDIER
When Boys and Girls Are Used in War
written by Jessica Dee Humphreys & Michel Chikwanine
illustrated by Claudia Davila
Kids Can Press, 2015
ISBN: 978-1-77138-126-0
Source: eARC from NetGalley/purchased copy
All opinions expressed are solely my own.

Michel is like many other five-year-olds: he has a loving family and spends his days going to school and playing soccer. But in 1993, the Democratic Republic of Congo, where Michel and his family live, is a country in tumult. One afternoon Michel and his friends are kidnapped by rebel militants and forced to become child soldiers.

Michel's story packs quite a punch.  With the assistance of another writer and a talented illustrator, Michel shares his heart-wrenching story with young readers.  He tells of being kidnapped at the age of five and being forced to help a rebel militia fight against both the national government and local villagers. He speaks of being forced to shoot a friend and being brainwashed into thinking that his family would never take him back.  Thankfully, he never questions his families love for him and he finds the courage to flee when the opportunity comes.  But he still has to live with the horrific memories and confusing emotions that he carries home with him and as his father's humanitarian work further endangers the family, he once again finds himself on the run.  Eventually, Michel made it to the United States but not with his family intact.  What is so admirable is that in learning to cope with the pain he's faced in his life, Michel has learned to speak out and in doing so help others.  The story is told beautifully in the illustrations and text giving the reader a glimpse into a topic that should not be ignored.  However, while not overly graphic, there is violence and some horrible acts briefly mentioned and because of this the book may not be appropriate for all young readers.  I highly recommend this book for more mature middle grade readers on up. A book I will never forget.
CitizenKid Graphic nonfiction Great Teaching Books middle grade nonfiction NetGalley