WELCOME TO THE EQUALITY STATE Wondrous Wyoming is home to some amazing landscapes: here you can enjoy both the piping hot springs of Yellowstone National Park and the chilly, snowcapped Rocky Mountains. While the western side of the state impresses with its huge mountain peaks, the scenery in the east, with its rolling prairies, is gentler. As well as its thrilling landscapes, Wyoming is well known for its incredible history of exploration and adventure. For it is here that daredevils like Buffalo Bill and outlaws like the Sundance Kid, as well as many fearless bucking-bronco riders, honed their skills. But for all its history of Wild West escapades, the Equality State has long lived up to its “Equal Rights” motto: in 1869 it became the first state where women could vote, and in 1924 it elected the first female state governor in the country. 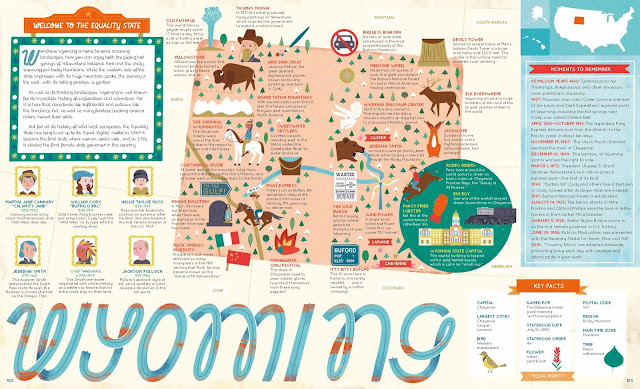 CHIEF WASHAKIE c.1798–1900 This Shoshone leader negotiated with white military and settlers to ensure that his tribe could stay on their land.

JEDEDIAH SMITH 1799–1831 The explorer Smith rediscovered the South Pass route through the Rockies: a crucial shortcut on the Oregon Trail.

NELLIE TAYLOE ROSS 1876–1977 Ross won her husband’s position as governor after he died. She also became the first female director of the U.S. Mint.