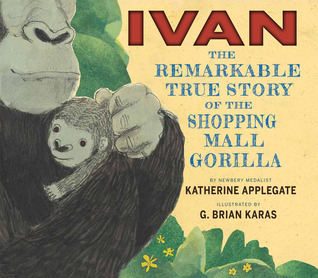 In a spare, powerful text and evocative illustrations, the Newbery medalist Katherine Applegate and the artist G. Brian Karas present the extraordinary real story of a special gorilla.

Captured as a baby, Ivan was brought to a Tacoma, Washington, mall to attract shoppers. Gradually, public pressure built until a better way of life for Ivan was found at Zoo Atlanta. From the Congo to America, and from a local business attraction to a national symbol of animal welfare, Ivan the Shopping Mall Gorilla traveled an astonishing distance in miles and in impact.

This is his true story and includes photographs of Ivan in the back matter.

Applegate sure has a way with words.  Using even fewer words than she did in her Newbery-winning The One and Only Ivan, she tells the true story of Ivan in picture book format.  It's still kind of a sad story involving Ivan spending 27 years in a fourteen by fourteen cage.  Thankfully it does have a happy ending with Ivan living the last 18 years at Zoo Atlanta.  It's an interesting commentary on the whole nature versus nurture debate though when you consider that despite living with female gorillas he never fathered babies and he was afraid of them at first.  The illustrations are nice and work well for the most part.  There was one illustration that I found a bit irritating in that the male gorilla in the picture was standing straight up which of course they can't do in real life as a photo of Ivan at the end of the book demonstrates.  In a nonfiction book I like the illustrations to be as realistic as possible.  But that is the only quibble that I have with this sweet story. 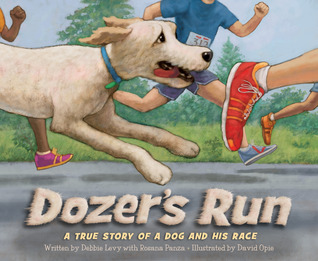 DOZER's RUN
A True Story of a Dog and His Race
written by Debbie Levy with Rosana Panza, illustrated by David Opie
Sleeping Bear Press, 2014
ISBN: 978-1-58536-896-9
Picture Book Nonfiction
Source: purchased
All opinions expressed are solely my own.

Dozer the Goldendoodle has a wonderful life! He and his best friend, Chica, belong to a loving family. They have warm beds to sleep in, enough food to eat, and plenty of room in their yard to play and investigate. What more could a good dog want? As it turns out, Dozer wants an adventure. And when a runner runs past his yard, followed by another, and another, and another, Dozer decides to follow and see what is happening. In May 2011, unbeknownst to his owner, Dozer slipped out of his yard in Highland, Maryland, enticed by the sight of people running past. The runners were participating in the Maryland Half Marathon, a race benefitting the University of Maryland Greenebaum Cancer Center. Dozer joined the 2,000 runners in the race, inspiring everyone along the 13-mile race course. By the time his adventure was over and he was reunited with his family, Dozer's "Run" encouraged thousands of pledges in support of the Greenebaum Cancer Center. This true story of a playful dog that actually runs a half marathon entertains as well as inspires.

This is a sweet story about a dog who joins the excitement of a half marathon, running most of it himself and encouraging others along the way, before making his way home.  The story is told from Dozer's perspective which fictionalizes things a bit.  For example, the dogs explorations of the farm include the mentions of many of the smells they noticed along the way. A cute story that kids are bound to enjoy. 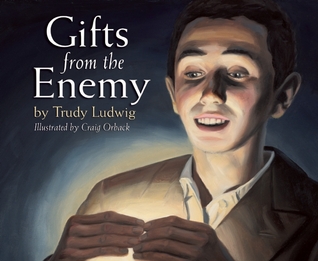 GIFTS FROM THE ENEMY
by Trudy Ludwig
White Cloud Press, 2014
ISBN: 978-1935952978
Picture Book Nonfiction
Source: purchased
All opinions expressed are solely my own.

Gifts from the Enemy is the powerful and moving story based on From a Name to a Number: A Holocaust Survivor's Autobiography by Alter Wiener, in which Alter recalls his loss of family at the hands of the Nazis and his internment in five prison camps during World War II. This picture book tells one moving episode during Alter's imprisonment, when an unexpected person demonstrates moral courage in repeated acts of kindness to young Alter during his imprisonment. Written by acclaimed children's writer Trudy Ludwig, author of Better Than You and Confessions of a Former Bully, and illustrated by award-winning children's book illustrator Craig Orback, Gifts from the Enemy teaches children in age-appropriate language about the dangers of hatred, prejudice, and stereotyping and that there are good and bad in every group of people. The accompanying questions and activities for readers provide teachers and parents with helpful direction in presenting this history and the valuable story. Gifts from the Enemy highlights how acts of social justice and kindness can change lives.

This is an amazingly well done story from the Holocaust that is appropriate for younger readers.  The fact that it is true and told by the man who actually experienced it makes it even more powerful.  The story demonstrates in a powerful way just how important those small acts of kindness can be.  In this case, the kindness saved the young man's life just when he was ready to give up because of all the suffering around him.  The illustrations complement the story well, showing enough to get the message across without being too graphic for the younger crowd.  I highly recommend this one most of all because the theme comes across loud and clear that friends can come from any group of people, even those who are supposed to be our enemy.
Nonfiction Monday picture book month picture book nonfiction