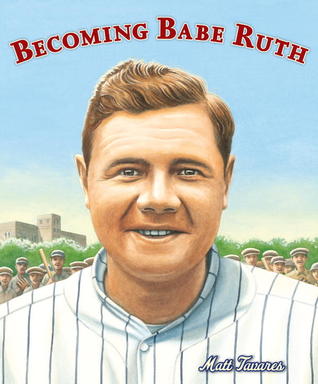 Before he is known as the Babe, George Herman Ruth is just a boy who lives in Baltimore and gets into a lot of trouble. But when he turns seven, his father brings him to the gates of Saint Mary’s Industrial School for Boys, and his life is changed forever. At Saint Mary’s, he’s expected to study hard and follow a lot of rules. But there is one good thing about Saint Mary’s: almost every day, George gets to play baseball. Here, under the watchful eye of Brother Matthias, George evolves as a player and as a man, and when he sets off into the wild world of big-league baseball, the school, the boys, and Brother Matthias are never far from his heart. With vivid illustrations and clear affection for his subject, Matt Tavares sheds light on an icon who learned early that life is what you make of it — and sends home a message about honoring the place from which you came.

Babe Ruth was known for a lot of things, but baseball was his greatest passion.  In this book, Tavares takes the reader on the journey as George Herman Ruth develops this initial passion into a career and becomes a baseball legend.  A mischief maker from the time he was little, his desperate parents finally put him into Saint Mary's Industrial School for Boys.  George hated the rules, the work, and going to class.  The only thing he didn't hate was the opportunity to play baseball almost every day.  He like the other boys loved to watch Brother Matthias hit home runs.  Over time and with a great deal of practice, George becomes a fabulous ball player and even when he leaves to play in the minors and then the majors, he never forgets where he learned to play.  He maintains contact with the school and when the school is devastated by fire, Babe Ruth steps forward to help.  This is an appealing and enjoyable book about how a young boy turns his passion into a life.  I appreciated the fact that the book mentions Ruth's continued mischief making without giving a lot of specifics.  I also liked the author note at the end explaining the research he did and the fact that there were few images to refer to for the illustrations and how that contributed to the legend of Babe Ruth.  A great book for baseball fans. 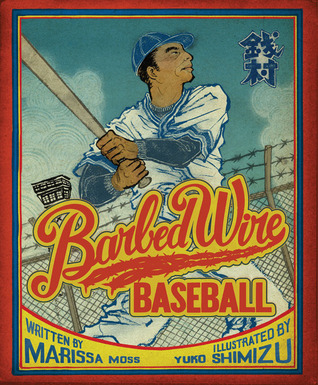 As a boy, Kenichi “Zeni” Zenimura dreams of playing professional baseball, but everyone tells him he is too small. Yet he grows up to be a successful player, playing with Babe Ruth and Lou Gehrig! When the Japanese attack Pearl Harbor in 1941, Zeni and his family are sent to one of ten internment camps where more than 110,000 people of Japanese ancestry are imprisoned without trials. Zeni brings the game of baseball to the camp, along with a sense of hope.

This is a beautiful book about an important time in American history.  As much as I love my country, the United States has done plenty of awful things over the years.  This book takes a look at one of those things, the internment of Japanese Americans during World War II.  But I really liked the positive way that Zeni chose to face this serious injustice.  Zeni, a young Japanese American fell in love with baseball the first time he saw it played.  And despite his small size and his parents discouragement, he chose to keep playing.  He even had the opportunity to play ball with Lou Gehrig and Babe Ruth (one of my favorite parts is seeing the photograph of the five-foot Zeni dwarfed by Gehrig and Ruth in a photo in the end notes).  But his skill and popularity did not save him when the Japanese attacked Pearl Harbor.  But he refused to let the unfairness of his imprisonment to stop him from playing baseball.  With the help of his sons, and other prisoners, Zeni built a baseball stadium. It's admirable that they found a source of hope in the midst of the challenges they faced. With this type of book, I always appreciate notes by the author and/or illustrator explaining why they did things they way they did and what they did to fill in some of the blanks. 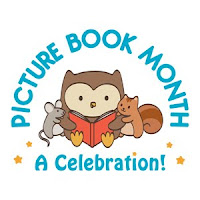