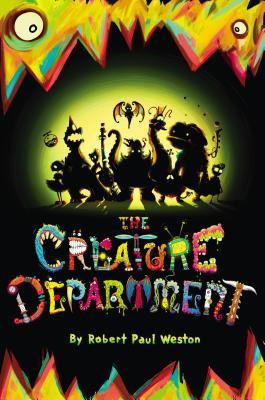 THE CREATURE DEPARTMENT
by Robert Paul Weston
Razorbill, 2013
ISBN: 978-1-59514-685-4
Middle Grade Fantasy
Grades 4-8
Review copy provided by publisher in return for honest review.
All opinions expressed are solely my own.

A team of quite unusual creatures…

But can they save the department?

Elliot Von Doppler and his friend Leslie think nothing ever happens in Bickleburgh, except inside the gleaming headquarters of DENKi-3000—the world’s fifth-largest electronics factory.

Beneath the glass towers and glittering skywalks, there's a rambling old mansion from which all the company’s amazing inventions spring forth. And no one except Uncle Archie knows what’s behind the second-to-last door at the end of the hall.

Until Elliot and Leslie are invited to take a glimpse inside.

They find stooped, troll-like creatures with jutting jaws and broken teeth; tiny winged things that sparkle as they fly; and huge, hulking, hairy nonhumans (with horns). It is unlike anything they’ve ever seen!

But when Chuck Brickweather threatens to shut down the DENKi-3000 factory if a new product isn’t presented soon, the creatures know they are in danger. And when Uncle Archie vanishes, it’s up to Elliot, Leslie, and every one of the unusual, er, "employees" to create an invention so astonishing it will save The Creature Department.

Robert Paul Weston is the author of Zorgamazoo, a novel entirely in rhyme, which was an E.B. White Read Aloud honoree and a "natural descendant of the works of Dr. Seuss and Roald Dahl." It was also a Booklist starred top ten debut of 2008 as well as a recipient of the California Young Reader's Medal, the Silver Birch Award, and the Children's Choice Award.

Weston's second novel was the hardboiled fairy-tale Dust City, which was nominated for the Edgar Allan Poe Award for Best Young Adult Mystery. Prince Puggly of Spud and the Kingdom of Spiff published in February 2013.

All of Zack Lydon's time is devoted to drawing things.  When he is not drawing a blank, he is probably drawing a bath.  Part of Zack's daily routine involves drawing attention to things that look pretty, smell curious, or sound eerie.  Zack seldom draws attention to himself, because he dislikes drawing crowds - too many details.

Zack is currently a designer at Framestore NY where he draws a good deal of inspiration from the talented folks around him, and subsequently, draws pictures.  At Framestore, Zack worked as the illustration and animation lead for the audible.com campaign, an info graphic for Motive, and the concept artist for the Wikileaks documentary "We Steal Secrets," among other campaigns.

Zack is a graduate of SVA's computer art program, where he collaborated with Sang Lee to create an animated short which consisted of more than 2,191 drawings.  The short, "Still I Breathe," was well received at various festivals, and was recognized at Metrocaf, the Art Directors Club, and the Student Academy Awards.  Using drawings to tell an original story was an amazing experience for Zack, and he intends to do it for the rest of his life.

This is the kind of book that I just love.  Full of heart and humor with odd but endearing characters and awesome illustrations, The Creature Department is a definite child pleaser.

Elliot is shocked to discover that his uncle works at a factory where all the inventions and technology are actually developed by a bunch of 'creatures.'  Creatures such as Jean-Remy, the fairy bat, who is the Chief of Fiddly Bitology (fiddly bits) and Gugor the Kuncklecrumpler, Chief of Rickum Ruckery. Elliot and his friend Leslie are thrilled to be invited to help in the Creature Department. But the Denki-3000 factory has a big problem.  They haven't put out any new inventions recently and are facing bankruptcy.  If they can't come up with something great soon, the factory will be forced to close down. Can Elliot and Leslie help the creatures come up with something great before it's too late?

I absolutely loved this book.  The illustrations add so much to the humor and quirkiness of the story.  The creatures are definitely creatively presented and unique.  It's clear that a lot of work went into making this book work and it does in fabulous ways.  I can see kids really getting into this book, at least the ones who aren't afraid to let go of their imaginations and let them soar.

Here are some examples of the awesome illustrations inside.