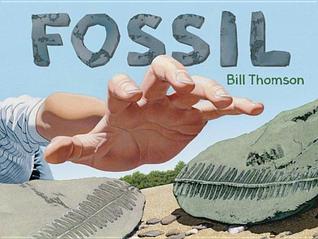 FOSSIL
by Bill Thomson
Two Lions/Amazon Publishing, 2013
ISBN: 978-1-47784-7-008
Picture Book
K and up
Review copy provided by publisher in return for honest review.
All opinions expressed are solely my own.

When a boy and his dog go for a hike, the boy trips on a fossil, and it comes to life, revealing an ancient plant. The boy is so intrigued that he breaks two more fossils and they too come to life - showing a prehistoric dragonfly and a pterodactyl. The dog jumps on the pterodactyl's back, and the boy, desperate to get his dog back, figures out a way to make things go back to normal. Using original art, this "wordless story" will surely spark imagination and creativity.

Bill Thomson lives in Southington, Connecticut with his wife, Diann, and their three sons, Billy, Nik, and Ethan. Bill has illustrated Karate Hour, Building With Dad, Baseball Hour, and Soccer Hour, all written by Carol Nevius. Bill's first solo book, CHALK, was released in the spring of 2010, and he recently completed his second book, FOSSIL (Fall 2013). Bill is a Professor of Illustration at the Hartford Art School at the University of Hartford.

My new wordless book, FOSSIL, is an exploration of imagination that takes a boy and his dog on a fantastical adventure. I hope that in addition to being a book that can be used as a tool for beginning/reluctant readers, as a prompt for writing, or purely as entertainment, FOSSIL may also generate interest in science and prehistoric life for young readers.

While the book has no words, it still involved a great deal of research. Because I work realistically, getting good visual information is critical to the success of my paintings. After researching books and websites to gain an understanding of my subject matter, I carefully selected models, found props, built models, and scouted locations to photograph as reference. Then I looked at these photos to make my acrylic paintings life-like and believable.

To create FOSSIL, I hoped to acquire authentic fossils for a fern, dragonfly, and pteranodon—each of the relics the boy and his dog encounter in my story. Having actual fossils would allow me to light them in different ways and show them from many different perspectives. 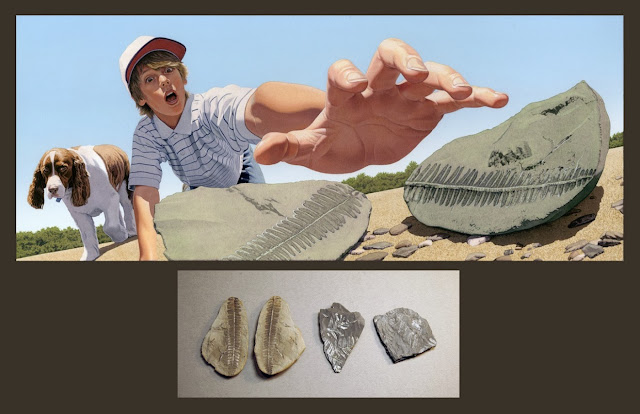 My first quest, a fern fossil, was very common and easy to find. I purchased several fern fossils on eBay, a nice resource with a multitude of possible choices. Acquiring dragonfly and pteranodon fossils were not so easy. I learned that dragonfly fossils were extremely rare and expensive, and a pteranodon fossil would be almost impossible to purchase. However, I was able to study the visual aspects of fossils in museums and stores. I decided a more practical goal was to construct my own replicas out of clay for both the dragonfly and pteranodon claw. I made these based on photos of real fossil specimens found in books and the Internet.

To depict the pteranodon, I read a great book titled The Illustrated Encyclopedia of Pterosaurs by Dr. Peter Wellenhofer, and a very informative website called, http://www.oceansofkansas.com/pteranodon.html . My rendition was based on information from these sources, pteranodon models, and my imagination. I even looked at lizards to make its texture more reptilian (pteranodons are flying reptiles). Because it is hard to know exactly what a pteranodon looked like, my primary goal was to blend fact with imagination and depict a convincing creature that would serve the story.

Because FOSSIL has no words to provide clarification, it was critical to create the most visually clear and engaging story possible. After gaining an understanding of my subject matter, I sometimes made artistic choices regarding how I would use information. For example, after observing many fossils, I saw that their rock could vary in color. In my story, I decided to use muted colors to differentiate the rocks and create a subtle link with the fossil and the thing it contained. Although the color of fossil rocks does not actually reflect its content, I made this choice as a visual key for young readers. I also chose not to depict the bone of the wing of the pteranodon so the claw shape would read more clearly. When creating a wordless fantasy, you begin by understanding your subject and then deciding how to weave that information into a cohesive and captivating story.

One of the wonderful things about wordless picture books is the opportunity to create one's own version of the story.  There is so much room for using one's own imagination to explain what one sees or to even add more details.  The discussion possibilities are endless, limited only to the imagination of those reading the book. Bill Thomson's new book, Fossil, offers so much in terms of opportunities to discuss fossils, dinosaurs, and other aspects of science in addition to the fun story itself. And the idea of fossils coming to life is an enthralling idea that I have no doubt that kids will love.  The illustrations are gorgeous and full of life. And it's clear the illustrator did his homework, the fern, dragonfly and pteranodon all look quite real. And the expressions on the boy's face as the fossils come to life around him are humorous. All in all, a fabulous read.