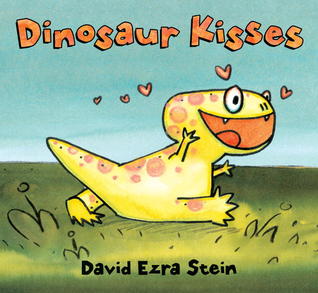 WHOMP! An energetic young dinosaur figures out her own way to give a kiss in the latest from the creator of the Caldecott Honor–winning Interrupting Chicken.

For newly hatched dinosaur Dinah, the world is an exciting place. There is so much to see and do. She tries this — STOMP! And she tries that — CHOMP! Then she sees a kiss and knows just what she wants to try next. Who can she kiss? And after a few disastrous attempts, can she figure out how to give someone a kiss without whomping, chomping, or stomping them first? Young children will chuckle and cheer when Dinah finds just the right creature for her dinosaur kisses in this funny new picture book from David Ezra Stein. 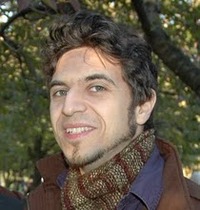 Award-winning children's author and illustrator David Ezra Stein was born in Brooklyn, NY. By the time he was three, he was asking adults, "Wanna come to my room? Read books?" This love of reading grew into a love of telling stories, and then, writing.

David Ezra Stein’s Interrupting Chicken was awarded a 2011 Caldecott Honor, as well as many state awards. His picture book Leaves won the Ezra Jack Keats award and was a Publishers Weekly Best Book of the Year, a Kirkus Reviews Editor’s Choice, and a School Library JournalBest Book. Booklist called his book Monster Hug! “a cousin to Maurice Sendak’s Where the Wild Things Are.” Pouch! (Putnam), was a 2010 Charlotte Zolotow Honor Book. His books have been translated into Chinese, Korean, Japanese, Spanish, French, and Finnish.

As a young child, David started out drawing on Post-It note pads his mother, an editor, left around the house. An admitted “space cadet,” he showed an early knack for daydreaming and doodling. His parents and grandparents read him lots of books, which fed his imagination and became a touchstone for his love of imagery and storytelling later in life.

“I’ll never forget the experience of sitting in a beloved lap and having a whole world open before me: a world brought to life by the pictures and the grown-up’s voice. That wonder is what I want to re-create in my own books,” says David.

David went on to become a voracious reader and made up stories of his own. Near the end of his time at Parsons School of Design in Manhattan, encouraged by beloved author and teacher Pat Cummings, he decided to pursue children’s books as a career.

After graduation, he was briefly a window display artist, puppeteer and puppet builder, interior and set-design illustrator, and New Yorker cartoonist. In 2006, his first book, Cowboy Ned & Andy, was published by Simon & Schuster. Since then he has published nine picture books. His latest, Because Amelia Smiled (Fall 2012), continues a richly creative working relationship with Candlewick Press.

David lives in Kew Gardens, NY with wife, Miriam, and son, Sam. When he’s not working on new stories and pictures, he enjoys making music, cooking, running, hiking, and talking with kids and grown-ups about books!

I am eager to try this book out with the target audience. I enjoyed it and I think children will too.  This is a different sort of look at kisses and I have to admit the end surprised me, it was not at all what I was expecting, but it definitely made me laugh.  The antics of the young dinosaur reminded me greatly of a young child with her enthusiasm and determination.  The baby t-rex starts off stomping and chomping, but then she sees a kiss and decides that is what she wants to do, but her efforts fail in funny ways, until she finds the right creature to kiss, although not in the way I expected.  I love this kind of book because they are so fun to share.  The reader thinks he/she knows where the story is going only to be delightfully surprised. Highly recommended.