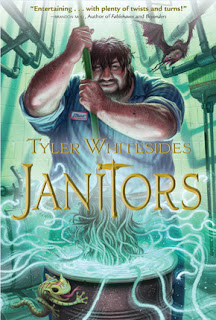 JANITORS
by Tyler Whitesides
Shadow Mountain, 2011
ISBN: 978-1-60907-065-6
Review copy provided by publisher in return for honest review.
All opinions expressed are solely my own.

"I see creatures in the school," Spencer insisted. "Some are slimy, some are furry, some have wings. I don't know why the rest of you can't see them. I'm trying to figure that out. I don't want to freak you guys out, but I had to tell you what I've seen."

No one takes Spencer Zumbro seriously when he tried to warn his classmates about the mysterious things prowling the halls and classrooms of Welcher Elementary School. But when he sees Marv, the janitor, going after one of the creatures with a vacuum, he knows he's not the only one who can see them.

With the help of his new friends, Daisy, Spencer has to find out what the janitors know. The children's search uncovers the magic taking place behind the scenes of their seemingly ordinary school, where a battle is being waged for the minds of the students. Who can be trusted - and can Spencer and Daisy protect their school and possibly the world?

Tyler Whitesides worked as a janitor at a middle school to put himself through college. It was there that he discovered the many secrets and mysteries that can be hidden in a dusty school. Tyler graduated from Utah State University with a degree in music. He enjoys spending time in the mountains, cooking on the barbecue, and vacuuming. Tyler lives in Logan, Utah, with his wife, Connie, a third-grade teacher. Janitors is his first novel.

Spencer: a sixth grader with a neat streak a mile wide, generally a good student, except when falling asleep during algebra lessons, can see Toxites (strange critters that live in his elementary school and feed on student brainwaves), reputation in shreds after pointing out the Toxites that seemingly no one else can see

Daisy:  a quiet sixth grader who is very gullible, especially when nervous; gets angry at Spencer's 'chameleon-like' behavior

Alice Zumbro:  Spencer's mother, trying to raise five children after her husband's disappearance, willing to do anything to protect her children

Marv Bills: a large and intimidating man, works as a janitor at Spencer's school, scares Spencer and seems to also be able to see the Toxites

Garth Hadley: works for the Bureau of Educational Maintenance whose job is to watch over school janitors, asks Spencer to help him retrieve something from "John Campbell", but can he be trusted?

All these characters come together in a creative school story. Working in a school I appreciated the familiar setting and I loved the idea of 'toxites' that suck up children's brainwaves, it explains so much. :) With real flying brooms, magic vaccum dust, and a Vortex of unimaginable power these characters each try to find their way through the confusion. An entertaining and well-written middle grade book well worth reading.