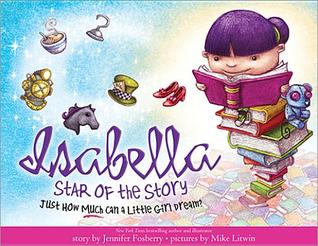 Every day's an adventure with Isabella!

Isabella checks out the library, and steals the spotlight from some of the most memorable children's book characters. She's Alice, tumbling down the rabbit hole. No, now she's Peter Pan, flying off to Never Never Land. And when it's finally time to follow the yellow brick road home, she decides she's happy just being Isabella, the little purple-haired girl with a lot of books and even more imagination.


There were a lot of things that I loved about this book.  I loved Isabella and her love of books and the library (natural since I'm a librarian).  I loved her eagerness to use her imagination in enjoying the books she chose.  The illustrations are delightful and imaginative and match the story to a tee. I loved the references to classic children's literature, including Peter Pan, Goldilocks, Dorothy, and Alice.  I really appreciated the information about the authors of these classic works that the author included at the back of the book.  There is some interesting information there that would be fun to share.  For example, I did not know that the L. in L. Frank Baum stood for Lyman or that Dorothy's shoes were originally silver.  This is a great book to use in encouraging students to read and imagine their way through some great children's literature. Highly recommended.