BLOG TOUR/GUEST POST/GIVEAWAY: The Chronicles of Egg by Geoff Rodkey

DEADWEATHER and SUNRISE
The Chronicles of Egg #1
by Geoff Rodkey
G.P. Putnam's Sons, 2012
ISBN: 978-0-399-25785-8
Middle Grade Adventure
Grade 3 and up
Finished book provided by publisher for blog tour.
All opinions expressed are solely my own.

For this post Geoff provides unique insight into his approach for writing the many action scenes in Deadweather and Sunrise. Don’t forget to scroll to the bottom of this post for a great giveaway I am hosting and to find out where in the blogosphere Geoff will be next!

A stunning middle-grade debut--full of heart, humor, and nonstop action

It's tough to be thirteen, especially when somebody's trying to kill you.

Not that Egg's life was ever easy, growing up on sweaty, pirate-infested Deadweather Island with no company except an incompetent tutor and a pair of unusually violent siblings who hate his guts.

But when Egg's father hustles their family off on a mysterious errand to fabulously wealthy Sunrise Island, then disappears with the siblings in a freak accident, Egg finds himself a long-term guest at the mansion of the glamorous Pembroke family and their beautiful, sharp-tongued daughter Millicent. Finally, life seems perfect.

Until someone tries to throw him off a cliff.

Suddenly, Egg's running for his life in a bewildering world of cutthroat pirates, villainous businessmen, and strange Native legends. The only people who can help him sort out the mystery of why he's been marked for death are Millicent and a one-handed, possibly deranged cabin boy.

Come along for the ride. You'll be glad you did. 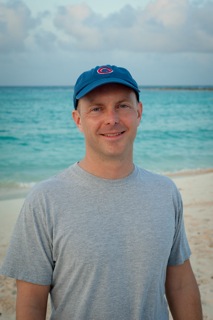 Geoff Rodkey is the author of the Chronicles of Egg middle grade comedic adventure series and the Emmy-nominated screenwriter of such hit films as Daddy Day Care, RV, and the Disney Channel's Good Luck Charlie, It's Christmas.


Geoff grew up in Freeport, Illinois and began his writing career on his high school newspaper. While in college, Geoff was an editor of both the Harvard Lampoon and the Let's Go travel guide series. His early writing credits include the educational video game Where In the World Is Carmen Sandiego?, the non-educational MTV series Beavis and Butt-head, and Comedy Central's Politically Incorrect.

Geoff's debut novel, Deadweather and Sunrise, is the first book in the Chronicles of Egg trilogy. The final volumes in the series, New Lands and Blue Sea Burning, will be published by Putnam in 2013 and 2014.

Geoff currently lives in New York City with his wife and three sons. They do not have any pets, mostly because the whole experience with the goldfish was just too upsetting. 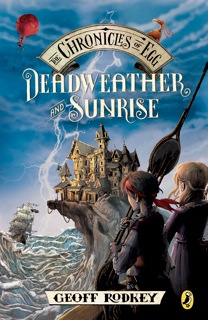 I'll keep it simple, I LOVED IT!  I enjoyed the characters, Egg is definitely a sympathetic character what with the abuse he suffers from his family but his good nature despite it.  Then when he finally does seem to find a good situation, it turns out to be an illusion and he ends up on the run having to fight for what it rightfully his.  But through it all, Egg proves to have more brains and courage than he or anyone else would have thought.  Millicent was quite an interesting character as well, spunky and clever and likeable but so adoring of her father that at first she doesn't see what he is capable of, not to mention completely prejudiced against her mother as a result. As for Guts, well, what an interesting character he proves to be. Millicent's father, who proves to be the villain in this story, is one of those characters that seems likeable and you want to like him, but you suspect him almost immediately of ulterior motives.  I liked the way that the author slowly revealed these motives without giving everything away immediately.

The writing was great, just detailed enough to clearly visualize who, where, and what is happening without bogging down the story. The story moves along at a nice clip, perfectly designed for those readers who like a quick-moving plot. There is plenty of action here involving cliffs, betrayals, pirates, and greedy, powerful men who are used to getting what they want. There are also plenty of ethical dilemmas here as well. This would make a great read-a-loud and I highly recommend it.

Hi! I'm Geoff Rodkey, author of Deadweather and Sunrise -- an adventure-comedy-mystery-romance set in a pair of islands that are as treacherous as they are exotic.

It's my first book, and since my background's in comedy (my first paying job was an episode of MTV's Beavis and Butt-head, and I later wrote the movies Daddy Day Care, RV, and the Disney Channel's Good Luck Charlie, It's Christmas), I wasn't sure when I started how big a challenge it'd be to write the book's many action sequences: the narrow escapes, pirate attacks, and fights to the death that our unlikely 13-year-old hero has to navigate.

As it turns out, though, when it comes to creating set pieces--those extended sequences in which either the tension or the jokes build, from one moment to the next, until they reach a satisfying climax--the process is the same whether you're writing action or comedy. In both cases, structure is critical--a good sequence is like a story in miniature, with its own beginning, middle, and end, and with each element connected by a change in stakes or circumstance.

For example, early in Deadweather and Sunrise, someone tries to push our hero, Egg, off a cliff. When the attack doesn't quite succeed, Egg's left hanging by his fingers. That's the beginning, and it's followed by a series of actions and counter-actions: Egg buys time with a distraction while searching for a foothold…then dodges a kick to the head, but loses his grip and finds himself dangling upside down by one leg…his attacker pulls a knife…the knife draws blood…while trying to avoid a second, fatal strike, Egg shifts his weight too far, and the entire side of the cliff begins to give way…. The tension rises at each turn until the climax, in which Egg either plunges to his death or outwits his adversary.

(Spoiler alert: he doesn't plunge to his death. If he did, I'd be stuck with a 90-page book and a dead protagonist.)

The identical structure's at work in a comedy sequence I once wrote for the movie RV, in which a beleaguered father played by Robin Williams realizes the septic tank of his newly rented RV is full, and if he doesn't figure out how to empty it, his family won't be able to use the bathroom for a week. In this case, the sequence begins when Robin's character pulls into a campground dumping station and starts the complicated process of emptying the tank--which, if not done correctly, will lead to raw sewage winding up in places where you REALLY don't want to see raw sewage.

What follows is same sort of steadily increasing tension through action and counter-action -- the discharge hose is missing an attachment…a well-meaning idiot offers Robin a replacement…the replacement doesn't work right, making the problem worse…a second well-meaning idiot arrives, offering even more bad advice that dramatically increases the pressure level in the hose… -- until we reach a literally explosive climax.

Full disclosure: the end of that sequence is pretty gross, even to me. The phrase "a geyser of sewage spurts like an oil strike" seemed a lot funnier when I wrote it than when I actually saw the result on a movie screen. But a lot of audiences seemed to like it. And it did provide me with the unique pleasure of composing an email to my mother that read, "Spent the day writing an eight-page poop joke at the behest of the Sony Corporation."

Oddly enough, I can only think of one ironclad rule that separates action and comedy: in a comedy, you can rain down all sorts of trouble on your character's head (including, but not limited to, geysers of raw sewage), but you can never, ever draw blood. For some reason, blood is the only bodily fluid that's universally unfunny. Even the Three Stooges, whose entire shtick was beating each other senseless, never once so much as nicked themselves shaving. Go figure.

For more action and comedy--along with a pinch of mystery and a dash of romance--pick up a copy of Deadweather and Sunrise. It's a fun, thrilling read, and I promise there isn't a single poop joke in the whole book.

***Please visit Chaos Is a Friend of Mine
for the next stop on The Chronicles of Egg Blog Tour!.***
BOOK TOUR SCHEDULE

Wednesday, March 13th: Chaos Is a Friend of Mine