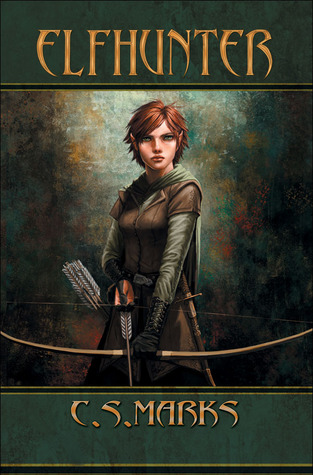 ELFHUNTER
Tales of Alterra, The World That Is #1
by C.S. Marks
Parthian Press, 2012
First published in 2005
MG/YA Epic Fantasy
Grades 7 and up
e-book provided for blog tour, in return for honest review
All opinions expressed are solely my own.

This is the tale of Gorgon Elfhunter, a monstrous, mysterious creature who has sworn to destroy all the Elves of Alterra—until none remain. It is the story of Wood-elven heroine Gaelen Taldin, who has sworn to rid her world of the Elfhunter even as she is hunted by him. The conflict between them creates a tangled web that blurs the line between Light and Darkness, love and obsession, free will and fate. Filled with moments both tender and terrifying, thrilling yet thought-provoking, it is a timeless epic fantasy suitable for readers of all ages. Join the Company of Elves, dwarves, mortal men, and delightfully intelligent horses. Come to Alterra—the “World that Is”.

Newly remastered by Parthian Press, with illustrations by the incomparable Hope Hoover, this second edition will intrigue and delight fans of the series as well as those who have yet to discover it. 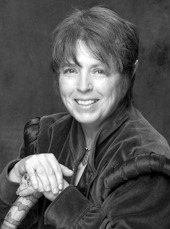 C.S. Marks has often been described as a ‘Renaissance woman’. The child of an English professor, Chris has always loved classic literature as well as epic fantasy, and decided to try her hand at writing and illustrating an epic series. The result: The very successful Elfhunter trilogy, which has sold over 40,000 copies both in print and e-book form. This epic trilogy has garnered awards (Reviewer’s Choice Best Fantasy, Best Series) and nearly 200 reviews. She is now hard at work on an exciting new Alterran series, the Undiscovered Realms.

A former field biologist and avid horsewoman, Chris holds a PhD in Biology, and has competed both nationally and internationally in the sport of endurance riding. She is a full professor of equine science at a small liberal arts college in the midwest. She is in demand as a lecturer and presenter at conventions, academic fairs, and publishing workshops.

While Chris has enjoyed an ample measure of success as an independent author, she is now looking forward to a long and productive relationship with Parthian Press, bringing her wonderful Tales of Alterra to an ever-widening group of appreciative readers of all ages.


What is the 'story behind the story?'

Hmmm...well, once upon a time, there was this kid in the midwest who loved to tell stories. She read a classic, epic trilogy when she was twelve, and became “Elf-obsessed”. She has been somewhat fascinated with Elves ever since, reading all sorts of books about them and writing her own tales. She even used them as rewards to get through the data analysis for her Ph.D. (example: if you spend four hours in data analysis, you can write two hours’ worth of Elf-story...so get to work!).

Eventually, when the kid had (sort of) grown up, she started writing another tale with Elves in it--because she had a story in her mind that needed to be told. It was a serious tale about a forlorn, doomed creature who had been given very few choices in life, was lost in black hatred he didn’t begin to really understand, and spent his life bringing sorrow and death to everyone around him. It started as a short story, and it grew into a trilogy.

What do you enjoy the most about writing fantasy?

I love epic fantasy and I enjoy world-building--I think my background as a scientist has helped immeasurably in creating a believable world--but I must confess that world building, for me, is secondary to character development. That said, one of the great things about fantasy is that you not only develop the characters, you can shape their world to your liking.

Who is your writing inspiration?

Actually, I’ve enjoyed writing as a form of recreation for a long time. It’s in my blood--my Dad was a Professor of Literature, and he inspired not only my love of reading and words, but the love of story-telling. I got serious about writing after he passed away suddenly in 2000--it was a devastating loss that left a “hole” in my spirit. I believe I filled that hole by writing. It is my greatest regret that he did not live to see my work in print, as he would have loved it. (Though I’m betting he would have accused me of using too many exclamation points!)

I have always enjoyed classic English literature, and I practically memorized “Bullfinch’s Mythology”, “The Iliad”, and “The Odyssey” as a child. I would say that growing up with the classics shaped my desire to be a writer in the beginning. But when I discovered Tolkien at the age of twelve, I became enamored of the idea of creating a fictional world. I really enjoy fantasy written in a more classical style, though my own writing has a more modern voice than my “olde favorites” did.  Though we are inspired by the great writers of the past, we still strive to find our own way.
What do you enjoy doing in your spare time?

I am a life-long horsewoman; in fact, I’ve been a Professor of Equine Science for twenty years. The two things I enjoy most (apart from writing) are riding a good horse and exploring rugged, pretty country. When I can explore rugged, pretty country on a good horse, I’m pretty much in nirvana. I also enjoy making art, crafting longbows (and shooting them), relaxing with my dogs, and exploring new places with my hubby. :-)

If you could travel anywhere or see anything, where would you go and what would you
do there?

OK remember, now...you said “anything”. There are many places in this world I would like to visit, and many sights I would love to see, but if I had no restrictions whatsoever, I would ask to go out into space. I want to see another of the (doubtless) many worlds inhabited by intelligent life-forms, just to verify that we are not alone in the universe. It would be the most humbling, yet comforting, experience ever. Being able to verify it would change the future of humankind.

I get to “visit another world” every time I step into Alterra--it would be wonderful to do it “for real”. As far as what I would “do there”, I really would have to wait and see! :-)

What book character would you most like to meet and why?

I think my brain just melted down trying to decide.

If not restricted to a fictional character, it would probably be James Herriot. I love those books and I share a lot of his passion and empathy for the countryside and the wonderful animals who enrich our lives. My respect for the man is enormous...his passing was a great loss.

If a fictional character, well, I hope no one thinks me odd or self-absorbed, but I have a fascination with Gorgon Elfhunter. I would love to have a lengthy conversation with him. Of course, he would be occupying Hannibal Lecter’s old cell at the time, and it would have been further reinforced and electrified with, like, a million-volt electric barrier, just in case! ;-)

In a somewhat less morbidly-fascinated moment, I would enjoy the heck out of meeting Fingolfin from “The Silmarillion”. “Bigwig” from “Watership Down” would be enjoyable, too, provided I could understand Lapine.

I love epic fantasy. I'm not sure if it's because of the fantastic world building, the chance to really get to know the characters, or just the hugeness of the storytelling, but I am a fan of such stories. Elfhunter, definitely falls into that character.  I love the way that Marks immediately brings us into the story by describing the characters in their situation as Gaelen and Nelwyn, female elves out on patrol, relax by a fire sheltering from a storm.  For me description is a vital part of epic fantasy stories, to really get a feel for the story, I need to understand the setting as well as the characters and situation, Marks does a great job with this, she pulled me into the story immediately. I am very much looking forward to seeing where the story goes next!

Thanks to the publisher for providing four digital copies of Elfhunter and a print copy of The Fire King, an Alterra novella for giveaway.

Open only to those who can legally enter. Winning Entry will be verified prior to prize being awarded. No purchase necessary. You must be 13 or older to enter or have your parent enter for you. The winner will be chosen by rafflecopter and announced here as well as emailed and will have 48 hours to respond or a new winner will be chosen. This giveaway is in no way associated with Facebook, Twitter, Rafflecopter or any other entity unless otherwise specified. The number of eligible entries received determines the odds of winning. Giveaway was organized by Heidi from Geo Librarian and sponsored by the publisher . VOID WHERE PROHIBITED BY LAW.