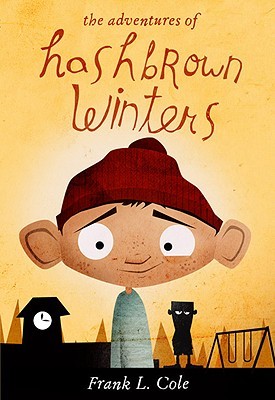 
Meet Hashbrown Winters. Like any typical Pordunce Elementary fifth grader, he's got a story. Actually he has several. There's the story of how he got his nickname, the story of how his treehouse club became one of the most popular groups at school, and, of course, the story of his untimely demise after a mishap with the beloved pet cockroach of Pordunce's walking death dealer, Hambone Oxcart. Will Hashbrown be able to convince Pordunce's own mob boss, Cordovo Figanewty, to offer him protection? Or are his days at Pordunce about to come to a swift and painful end? In this hilarious debut novel from Frank L. Cole, every kid who's any kid has a nickname, and half the fun of the story is figuring out how they got it. The Adventures of Hashbrown Winters will keep kids and parents alike laughing out loud, groaning in sympathy, and turning pages until well past bedtime.

Frank L. Cole has lived in such exotic places as the Philippines and Kentucky, and currently lives with his wife and three children out west. While he strived for years to earn his publishing credits, Frank considers sharing his message of “Exercising Your Imagination” to over 30,000 kids across the country as his greatest accomplishment. The Guardians of Elijah’s Fire is Frank’s 5th published book and will release this June, 2012. You can learn more about his writing at franklewiscole.blogspot.com.

A wacky, humorous tale of Hashbrown Winters and his friends and their struggles with the school bully, Hambone Oxcart.  I have to admit, I wasn't sure quite what to think about this book at first.  It is rather strange, I mean the setting is a fairly normal elementary school, but that's about all that's normal about it.  There is an 'elementary mob boss,' an 'oracle' who lives in a locker, and pretty much everyone has a strange nickname of some sort. Basically the book is absurd to the point of being humorous, for those who enjoy absurdity. For example, Hashbrown's friends are named Snow Cone, Whiz (don't ask), Four Hips, and Measles. I spent quite a bit of time rolling my eyes, but I have a strong feeling that a lot of kids would find this book very funny. I did find Cole's descriptions quite entertaining and creative.  Here are some examples:

"She giggled hoarsely, sounding more like a braying donkey than a ten-year-old girl."

"I looked over my shoulder at the sun slowly sliding behind the horizon.  It very well could have been a giant hash brown dropping into a fiery vat of cooking oil."

"Hambone's feet are enormous.  They are so big he once stepped on both of Timothy Kiegan's feet at the same time and snapped every single one of his toes."

This book would be great for teaching about metaphors other sorts of descriptions, also how exaggeration can be used to make a point, this book is full of exaggeration and humor.  For the right reader, this series would be quite enjoyable. Recommended.