WHIRLPOOL
by Eileen Enwright Hodgetts
Createspace, 2012
ISBN: 9781475103595
Historical Fiction
Copy provided by author for blog tour.
All opinions expressed are solely my own.

See here for a review of this book.

The year is 1923 and the jazz age is in full swing. Evangeline Murray, a young widow from Ohio, is recruited by the Women’s Freedom Movement to represent the spirit of modern womanhood by going over Niagara Falls in a barrel. Evangeline eagerly embraces her opportunity to achieve fame and fortune, until she sees the power of the River and begins to understand the risk she is taking. Joshua McClaren, an enigmatic battle-scarred veteran of World War I, and the best boatman on the river, reluctantly agrees to launch the headstrong Evangeline. Joshua has seen hundreds of bodies surface in the Whirlpool below the Falls, and has faced death on the battlefields of Flanders and has no respect for the charming, impetuous Mrs. Murray, and her desire for fame. Before the barrel can be launched, each of them will have to face their own demons, painful secrets will be revealed and the Niagara Rivers will claim two more lives. Inspired by true stories of the Falls, Whirlpool is a romance, an adventure, and the closest that most of us will ever come to taking the fateful plunge over the Falls.Whirlpool is a fiction that is based on reality. Seven people have tried to ride over Niagara Falls in a barrel. Four have succeeded and three have died. The first person to make the attempt was Annie Taylor, a middle aged school teacher from Michigan who made a successful journey in 1901. Barrel riding at Niagara Falls is now forbidden by law, but at the beginning of the 20th century Niagara was a haven for daredevils of all types, and many of their exploits are included in the novel. 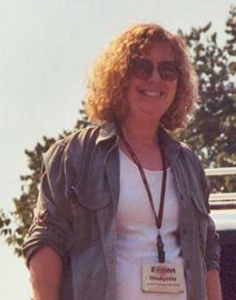 Eileen Enwright Hodgetts is the author of Whirlpool.  She is a much traveled writer. Brought up in England and Wales, she has also lived and worked in South Africa and Uganda and now makes her home in Pittsburgh, PA. Her life experiences allow her to use exotic backgrounds for her novels and to understand how an adventure can begin with just one small incident. For ten years she directed a humanitarian mission in East Africa and is also involved in a Ugandan Coffee Farm. Much of her writing reveals not only her great fondness for the British Isles, but also her British sense of humor which still sees the funny side of most situations.

In addition to writing novels, Eileen Enwright Hodgetts is also an accomplished playwright with a number of national awards to her credit. Her novel, Whirlpool, began life as a stage musical playing at the Niagara Falls Convention Center in Niagara Falls, New York. In 1993 the Mayor of Niagara Falls, NY, proclaimed the summer of 1993 as Whirlpool Theater Days in honor of the production.

The author’s award-winning courtroom drama Titanic to All Ships will open at the Comtra Theater on April 13 to commemorate the 100th anniversary of the sinking of the Titanic. The drama, created under a Fellowship Grant from the Commonwealth of Pennsylvania, is a dramatic re-telling of the Senate Hearings into the tragedy. The play has won several national awards.

To get your copy of Whirlpool by Eileen Hodgetts at Amazon.
Pick up your ebook copy at Barnes & Noble.
Find out all about Whirlpool at Goodreads.

My new novel, Whirlpool, is about a woman who risks her own life by trying to go over Niagara Falls in a barrel.  I want to assure you that no fish, ducks, domestic animals or wildlife of any sort was injured in the making of the book.  The book only contains one reference to a dog and a cat and I am not spoiling the story for anyone when I assure you that the dog and the cat survive and life happily ever after.
When a writer introduces some kind of animal as a major player in their novel, I immediately begin to worry.  Will the animal be okay?  Will we be subjected to a harrowing death scene?  Will the animal go hungry, or be left to fend for itself?  Will the author ever backtrack and tell me that the horse, dog, cat, rabbit or whatever is okay?  I get so busy worrying about the animal that I really can’t concentrate on the humans.  Black Beauty was a nightmare for me; all those terrible things happening to the horses.  I can’t even remember any of the other characters.

I now have two published novels and a dozen stage plays and, although my own animals are part of my daily life, I simply won’t give my fictional characters any kind of animals to care for.  It’s hard enough making sure the hero of the novel survives without creating sub-plots to make sure that all the domestic animals are cared for.  Whirlpool is set in Niagara Falls in the 1920s and Evangeline, our heroine, is determined to achieve fame and fortune (and maybe a Hollywood contract) by surviving a ride over Niagara Falls in a barrel constructed by the Women’s Freedom Movement.  Evangeline is a young widow who was married to a compulsive gambler.  With the kind of life she has led, I can’t imagine that she would have had time to take care of an animal.  However, Joshua McClaren, the war traumatized river man who is hired to supervise the launching of the barrel. Is a different kind of person.  I would like to have given him a large loyal dog, but then I would have to worry about taking care of the dog while Joshua is risking his life to try to save Evangeline.  So, no dog for Joshua.  When you read the book for yourself, you can decide whether there might be one or two cats hanging around Joshua’s boatyard.

Whirlpool is a novel about people in peril of losing their lives or losing their chance of love, but I have maintained my promise; no animals are harmed .  Of course there is  a chapter about a pirate ship with   bears and monkeys and other wild animals all headed for the Falls,  (and it’s a true story) but ...