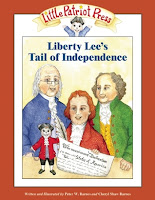 
Look, right over there—oh say can you see? It’s a Yankee Doodle mouse named Liberty Lee! On the 4th of July, Liberty Lee proudly tells how he and his friends helped the 13 American colonies win their freedom. For years the king of England had unfairly taxed them—he taxed their sugar, molasses, and teas. What would be next? Macaroni and cheese? Finally Liberty Lee and the other fearless colonists said enough is enough.
From the Boston Tea Party to the “shot heard ’round the world” at Lexington and Concord, Liberty Lee describes how he took part in the brave acts that won America’s independence. He lends Jefferson a hand (and a tail!) in writing the Declaration of Independence. And he is there for the final American victory at Yorktown. Follow Liberty Lee and his patriot friends as they fight for the unalienable rights to life, liberty, and the pursuit of happiness—for people and mice everywhere!

Liberty Lee, a mouse, introduces the events leading up to and surrounding the American Revolution.  The book provides a fun, fictionalized introduction to the creation of the United States of America.  The text is in rhyme that reads out-loud well.  There is enough information included to give children a basic understanding of what lead to the American Revolution and the Declaration of Independence.  The introduction of the mouse narrator makes the book more child-friendly.  The author does include more information about all the events mentioned in the book. I wish they had included a bibliography or works cited page, as a librarian, I always look for that, but regardless the book provides a nice introduction to an important time in the history of the United States.

Overall, this book provides a nice introduction for children to some of the important events leading up to the creation of the United States of America.
2012 Blog Tours 2012 Books American Revolution Blog Tour Book Reviews Historical fiction Middle Grade picture books Primary Grades