Fantastic Friday: Vikram and the Enchanted Seals by Sanjiv Behera 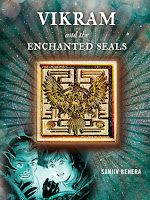 VIKRAM AND THE ENCHANTED SEALS
by Sanjiv Behera
Richshaw Books, 2010
ISBN: 9780983104216
Grades 4 and up
Copy sent by author for review.
All opinions expressed are solely my own.


Vikram, an apathetic kid from California, doesn’t want to be in India. But a death in the family leaves him no other choice. So he finds himself in a rural village, at his ancestral home where he meets his imposing grandfather. A special bond forms between them, and the old man gives Vikram an enchanted seal – a mystical relic from India's earliest civilization. It turns out that the seal is one of only a handful that combine to form the Dharma Cube, the most powerful weapon against evil the world has ever seen. Before Vikram can fully grasp the seal's profound significance, Grandpa is taken by Rakshasas – evil giants from the epic Ramayana – who are intent on destroying the Cube once and for all. Vikram enlists the help of younger brother Jai, and Manu, the family’s loyal servant, to search for Grandpa. Their journey takes them through the various landscapes of India: historical, mythological, artistic, philosophical, and natural. Tension mounts when Vikram realizes that he alone must unlock the secrets of his seal and the Dharma Cube, not just to rescue Grandpa, but to save all of humanity.

I have to say that I've never read another book quite like this one. That's one reason I like to read books set in or about other countries, it allows me to learn about other places, people, and cultures.  I found myself quite enjoying this one.  While I wished for more detail about the characters and especially about the setting, the plot moved along nicely.  I found the writing to be decent once I got used to it although there were some strange word combinations, I did not find these to slow the story down overly much.

Characterwise, I found the Rakshasas a fascinating kind of monster. I appreciated the fact that the author added some depth to them so that they didn't come across as completely evil or inept, although some of them definitely were.  I did wish for more depth in terms of Vikram, his brother Jai, Manu, and Grandpa.  I did like the fact that Vikram does grow in the story from a relatively meek and submissive person into a more confident decisive person. But that is about the only real character development in the story.

Plot: Where this book shines is in the plot.  The book does not waste anytime in getting to the action which I think young readers will especially appreciate, since they generally prefer a good plot to character development.  The plot does take some interesting twists and turns, and I have to say that it wasn't predictable, at least not to me.  A lot of times in this kind of story, the hero has to save the world by himself. I appreciated that here that wasn't the case, Vikram does play a very key role, but his friends and family help him do so.

Overall, I'd say this book is a fascinating different kind of fantasy involving elements of Indian (India) folklore plus plenty of imagination.  I would recommend it to those who enjoy a fast-paced story with lots of twists and turns (not to mention great monsters). 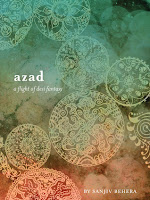 Azad means "liberated" in a number of South Asian languages despite its Arabic roots. In this case, azad is a collection of six short stories linked by Indian mysticism and a common theme of liberation. A street vendor, a young suburban girl, a pudgy athlete, a rebellious tour guide, a goodhearted rickshaw driver, and an earnest wall-street banker, all find their lives dramatically altered by mysterious forces from the Indian subcontinent, changes that free them from the confines of their unique worlds.

These short stories are absolutely thought-provoking and unlike anything I've ever read.  While only one of the six has what one might call a 'truly' happy ending, that just make the stories feel all that more real.  There is a element of fantasy in each story which changes the main characters situation but at the end of each story I was left wondering if the changes were for better or worse.  The consequences of choices made and actions taken really makes one think. I doubt there are many people who haven't made a wish about something. What if that wish came true, what might the consequences be? Or how would things in your life change if you simply had more self-confidence? Is is magic or something else?  These stories would be great for classroom use because there is much to discuss, in addition to choices, there could be discussions on being true to oneself, culture, family relationships, kindness, and obsession. I recommend this book for all those who want a quick, but thought-provoking read.
Adult Book Reviews Family Fantastic Friday Fantasy folktales Geography Great Teaching Books India Middle Grade Multicultural One World Many Stories Other Countries Secondary grades