BLOG TOUR: The Only Living Man with a Hole in his Head by Todd Colby Pliss 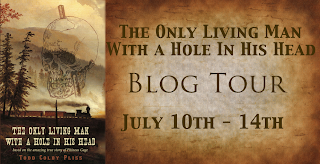 
One man. One Tamping Iron. One medical marvel.

Based on a true story, “The Only Living Man With A Hole in His Head” tells the tale of railroad foreman Phineas Gage, whom in 1848, had a three-foot long, inch-and-a-half in diameter, thirteen pound iron rod blast though his skull, taking out part of his brain, and the doctor who treated him and valiantly fought the medical establishment to prove the authenticity and merit of the case as Phineas Gage entered a journey into changed personality, the P.T. Barnum freak show and driving stage coaches in South America. It ended with medical science forever changed.


Topic: The Story Behind the Story (where the idea came from, research required, etc.)

I have always been a history buff and possess my teaching credentials in the social sciences. My mom sent me a newspaper – printed up like an old-time paper from the 19th Century, with stories included from that time. One of the stories was about Phineas Gage and the doctor who had treated him, Dr. John Harlow, who had been ridiculed by his colleagues for his published findings on the case. Like most people, I was vaguely aware of the case, having learned about it in science class – and it was a “Ripley's Believe it or Not” case -  but didn't really know the whole story and the aftermath of the accident. The more I researched it, the more I was convinced it would make a gripping “based-on-a-true-story” novel. I read a number of scholarly books on brain science, all of which referenced the Phineas case, psychology, but also, to get the feel of the times right, books and journals on railroads in the 19th century, P.T. Barnum's American Museum, stage coach driving, to name just a few. It was about a full year of research and taing notes before I even began to write the novel.

Based on a true story, The Only Living Man presents the account of Phineas Gage and his traumatic brain injury. The book also spends a good deal of time recounting the struggles that Dr. John Harlow, the doctor who treated Gage after his accident, faced in bringing to the world the things he had learned about the human brain from treating Gage.  I found both accounts fascinating.  I found myself empathizing with Gage and the dramatic changes he was forced to live with after the accident, including changes in personality such as profanity and a seeming inability to judge risks appropriately.  On the other hand he seems to have also developed a phenomenal memory as well. The human brain is and has always been a fascinating part of the human experience.  This account also includes a clear look at the prejudices and arrogance that we humans cling to so thoroughly, some of us more than others of course. I found it heartbreaking the way that Phineas struggled to find a new life after his old life was so thoroughly shattered.  He even worked at P.T. Barnum's American Museum as a 'freak' for a time.  Sadly, those with these kind of features are still treated badly much of the time.

While I enjoyed the story, there were some problems with this book.  The biggest was the clear lack of thorough editing.  There were grammatical errors, repetitive words, and long sentences.  With a thorough editing the book would be a much more pleasant read. I would also have enjoyed more details about what exactly happened to Gage, although that may simply not be available.  Dr. Harlow kept detailed records about his experiences, Gage did not.  I did appreciate the epilogue and bibliography that explain where the author got his information, but it does need to be remembered that this is BASED on a real story, which means parts of it are fictionalized, so I wouldn't call this straight nonfiction.

Overall, I would say this is an intriguing read for those who can get past the editing issues.  Keep in mind that it does contain a moderate amount of swearing and profanity and some rather graphic details about the injuries that Gage endured.  One thing I can say for sure, I'm grateful for how far the medical establishment has come in the 150+ years since then, and we owe a debt to Gage and Harlow for helping us learn so much.  To bad it came at the cost of so much suffering.