Welcome to the Tracing Stars Blog Tour and giveaway.  I am excited to be able to share this book and author with you.  If you have not already, I recommend reading my review/author bio here. Today, I have an interview with the author to share with you and a great giveaway.


A charming novel about sisterhood, self-identity, and friendship from the author of Flutter.
Indie Lee Chickory knows she's not as cool as her older sister Bebe. Bebe has more friends, for one. And no one tells Bebe she's a fish freak, for two. So when Indie accidentally brings her pet lobster to school, makes a scene, loses him in the ocean and embarrasses Bebe worse than usual, she makes a wish on a star to become a better Chickory. She tries to do this by joining the stage crew of the community's theater production, The Sound of Music. (Bebe has a starring role.) But Bebe is worried that Indie will embarrass her again, so she gives her a makeover and tells her who she should be friends with. That means Owen is out. But he's fun and smart, so Indie keeps her friendship with him a secret. At night, Indie and Owen rebuild a tree house into a ship in the sky to catch Indie's pet lobster. But during the day, Indie has to hide her friendship with Owen. When things come to a head, Indie realizes that being true to yourself is more important than being cool. But what's even more surprising is that Bebe realizes it, too. 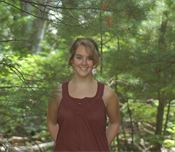 What's the 'story behind the story' of Tracing Stars? Where did the idea for Monty (lobster) come from? How much research did you have to do?

This is a great question. Some stories come easily and some are like pulling teeth out of an angry Rottweiler. This one was the pulling teeth one. I proposed a story to my editor that would have the feel of Little Women meets Bridge to Terabithia, and that story did have an Indie Lee Chickory and an Owen Stone, and they did have a tree fort, but Indie had a severe anxiety disorder and Owen met an early demise in the frothy waves of the ocean. There was no Monty. There was little laughter. Let’s just say, I am happy that it developed into two quirky characters with a lighthearted plotline. It’s pretty depressing around the house when your favorite characters are dying all the time.

Strangely, this story evolved from revision to revision and Monty was one of the very last characters to appear. He showed up when my editor, Jill Santopolo, mentioned that she didn’t quite get Indie yet. She didn’t totally understand her or her voice. At that point, I spent some time just with Indie, letting her talk, and in popped The Lobster Monty Cola. He was an obvious choice for the setting and for Indie’s unique character. Monty was the character that locked the entire story into place.

As far as research goes, the lobster and boat terms were things that I did have to look up and continue to have a running resource list for, but the theater terms and the building terms were not research-heavy at all. I have my bachelor’s degree in theater design, specifically lighting, but when you are in theater school, you learn a bit about everything. And I’m glad that even though I’m no longer climbing ladders and building stuff, I can at least put that knowledge to good use.

I loved the setting of Tracing Stars. Is this based on somewhere you've been or did you make it up?

Plumtown is a bit of a mashup, but I did draw heavily from small New England towns. Write what you know, right? Plumtown is quite a lot like York Beach in Maine, though a bit smaller. I specifically stole the taffy spinner idea from Goldenrod Kisses and plopped it down in Plumtown in fictional Sandies Saltwater Candies. I remember always being entranced by the taffy machine in the window regardless of age--5 or 15--I wanted to stare at it and watch the taffy stretch.

Despite it being a coastal setting, I wanted to give it an authentic touristy feel, but harness the perspective of the people who live there. I have not ever lived on the coast, so I borrowed from the area where I grew up in Vermont that was a big tourist spot. Granted, in VT the tourism was for skiing and leaf peeping, but you get the same sense of the people who are there making a living vs. the people who are there vacationing. Between the visions of the coast and the feeling of a tourist town that I know well, I hope I created what is an authentic coastal setting from the perspective of those who live and work there.

What's something you learned while writing/publishing this book?

And as far as publishing, well, I learned that the second book can be just as hard, or harder, to write than the first.

What led you to become a writer?

I have written my entire life. In second grade I wrote a book with my friend, Kim, called The Two Orphans. Despite writing my whole life, I did take a winding path to choosing it as a career. I did theater from middle school through high school and up into college, as well as for a few years professionally. But when I was at Emerson for theater design, I took a fiction class my junior year because I had some space in my schedule. I had my first critique and it was like waking up. A little voice saying, well, no kidding, that was what I should have been doing all along. So before I even finished at Emerson I applied to the Vermont College of Fine Arts. Frankly, I didn’t know what I was doing, and I didn’t know if I would get in. All I knew was I wanted to write and I made a desperate move. Luckily, I did get in and I started my MFA the summer I graduated from Emerson. My MFA at VCFA was a life changing experience. And although I no longer work in the theater, the work I did with it was time well spent. Theater people know how to tell a story, carry an audience to a new world. And in the bigger scheme of working out in the world, theater teaches you to work as a team and meet deadlines and stay cool under pressure. So even though it was a winding road, it was all time well spent.

What is your favorite/least favorite thing about publishing books?

Beyond the actual writing part, my favorite thing is the school visits, where I get to talk to great kids who have so many insights about my books and books in general. My least favorite thing is probably reviews. I am obsessive enough to let the one unfavorable line keep me up at night.

What are you working on now?

Right now, I am working on a story that centers around Valore (the snore) Arbuckle, her dog, Petty Officer Boone, and her playground bully, Melanie Burkram, as they hunt down an old revolutionary war treasure at Fort Ticonderoga.

What is your favorite kind of ice cream?

Well, I guess I may be a bit of an oddball here, but I’ll say it anyway: I like homemade banana ice cream. You just freeze bananas and then put them in the food processor and they get this wonderful ice cream texture. Then you can throw a few strawberries and chocolate chips on top and it is 100% heaven!


Yum. That sounds delicious, I'll have to give that a try.  Thank you, Erin Moulton for stopping by Geo Librarian today.  Readers be sure to enter the giveaway before you leave!  Also check out Erin's other book, Flutter. I've included the cover and synopsis below.

Big things are about the happen at Maple's house. Mama's going to have a baby, which means now there will be four Rittle sisters instead of just three. But when baby Lily is born too early and can't come home from the hospital, Maple knows it's up to her to save her sister. So she and Dawn, armed with a map and some leftover dinner, head off down a river and up a mountain to find the Wise Woman who can grant miracles. Now it's not only Lily's survival that they have to worry about, but also their own. The dangers that Maple and Dawn encounter on their journey makes them realize a thing or two about miracles-and about each other.
2012 Blog Tours 2012 Books Blog Tour Family Favorites friendship Great Teaching Books Middle Grade Realistic