June 28, 2012
Both books that I'm highlighting today deal with a difficult topic: terminal illness of a parent.  I'll say right off that both books made me cry because they were well told and the characters so real.  But both books will need to be shared in a sensitive manner because they won't be appropriate for all students.


Lily's mother has slowly been losing herself to multiple sclerosis.  After traditional treatment fails, she uses bee sting therapy, administered by Lily, to alleviate her pain.  Lily is trained as a veterinary assistant, so she can easily handle the treatments. What she can't handle is what happens when the bee sting therapy fails and it becomes clear that her mom wants to die.  One beautiful spring day, Lily's mother asks her for the most impossible thing of all--mercy.  While navigating first love, friendship, and other normal worries faced by high school sophomores, Lily also has to choose: help her mom go, or cling to her fading life for all it's worth.

I wasn't sure about this book when I first heard about it, but I decided to give it a try and I'm glad I did. I found it a compelling story about Lily and her mother as well as the Death with Dignity Act that was passed in Oregon years ago.  I found Lily a very sympathetic character as she struggles to take care of her mother while dealing with the normal challenges of high school, friends, crushes, etc.  I liked that she had support from others around her, friends and neighbors. I don't know how one could deal with such grief alone.

The setting was beautifully depicted and complimented the story nicely. I can't picture this story occurring anywhere else.  The plot moves along realistically and heartrendingly.  The relationship between Lily and her mother provides much food for thought as Lily considers her mothers' request for mercy.  I am not in favor of assisted suicide, but this book does a nice job of showing why others do support that idea.  There is much in this book to consider, but it is much more appropriate for older or more mature readers.   Note: there is some language, but other than the mature themes there isn't anything inappropriate in this book. 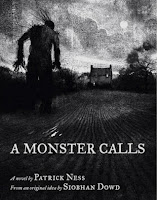 
At seven minutes past midnight, thirteen-year-old Conor wakes to find a monster outside his bedroom window. But it isn’t the monster Conor’s been expecting — he’s been expecting the one from his nightmare, the nightmare he’s had nearly every night since his mother started her treatments.

The monster in his backyard is different. It’s ancient. And wild. And it wants something from Conor. Something terrible and dangerous. It wants the truth.

From the final idea of award-winning author Siobhan Dowd — whose premature death from cancer prevented her from writing it herself — Patrick Ness has spun a haunting and darkly funny novel of mischief, loss, and monsters both real and imagined.

I'll admit I was really reluctant to read this book because I knew it dealt with grief and other dark themes, but I'd heard so many good things about it that I decided to go ahead and read it. I have a hard time coming up with words to describe it. I sobbed at some parts, but the symbolism was powerful, and despite the difficult topic dealt with here, I finished the book with hope.

The interactions between Conor and the monster feel heartbreakingly real.  My heart went out to Conor as he struggled with the emotions surrounding his mother's illness.  The fact that Conor was hurting so badly and no one really reached out to him really broke my heart. One wonders if someone had sat down with him and helped him face his feelings maybe he might have done things differently. I guess that's what makes this story so thought-provoking. The way the 'monster' helps Conor face the truth about his own feelings and nightmares leaves the reader pondering long after the book is done.

The illustrations I thought at first would be scary, they seem scary, but interestingly I didn't find them so. I thought they added greatly to the whole atmosphere of the book and the darkness of the feelings that Conor was struggling with.  I also figured the monster would be 'bad' but really, he isn't. I won't say more than that because I don't want to ruin it for those who haven't read it yet.  Just know that this book really makes you think about being human and the contradictory emotions that all of us struggle with at one time or another.  While I didn't agree with all the conclusions presented in the story, it certainly gave me much to think about.

I do recommend this book, but it needs to be recommended carefully.  This book is certainly not for all readers, but for the right reader the depths of this book are amazing. Note: there is some language, as well as a strong feeling of darkness to this story.

Reading these too books together was an interesting experience.  Both books have main characters who are struggling with the grief of losing the most important person in his/her life.  Both Lily and Conor dealt with their emotions in sometimes similar and sometimes different ways.  Both experienced moments of anger and frustration, both struggled with deep emotional pain as well as guilt. But there were strong differences as well, Lily had more support than did Conor. Conor in the end had to help himself because no one else did, not his grandmother, not his father, even his teachers offered sympathy but nothing else. Conor's mother might have helped but she of course was dealing with other things. Only Conor's friend, also named Lily interestingly enough, eventually saw what Conor was trying to hide, even from himself. Also, Conor's mother has done everything she could to last as long as she could, while Lily's mother longs for release.

I guess what I find so remarkable about both of these stories is how the stories end with a feeling of relief, not because the grief is gone, but because the characters have faced the truth and accepted it.
2011 Books Book Reviews Family fear friendship Great Teaching Books grief and loss Secondary grades YA Favorites